In the 2014 Dodgers’ frustrating and awful bullpen, any positive story is a welcome one. Recently, we’ve been viewing the emergence of Pedro Baez. Converted from third base at the beginning of last year, Baez was Dustin’s number 47 prospect entering the season and was not listed in his mid-season top 25. Not much was expected of him when he was called up in Washington in May because the Dodgers desperately needed another bullpen arm and Chattanooga is closer to DC than Albuquerque. Baez only made two appearances before he was called up for good when Chris Perez “hurt himself” in August.

All Baez has done since then is impress, at least on the surface. He now has 22-1/3 major league innings, including the eighth inning of last Sunday’s bullpen game; Brian Wilson presumably wasn’t available after his nightmare inning the day before. J.P. Howell has been mostly reliable as well, but he allowed as many runs last weekend as he did in the rest of the season combined. Howell has a 4.23 FIP in the second half, frequently fighting his control (6.59 BB/9 in that span).

This combination of events potentially sets the stage for Pedro Baez to take over the eighth inning role. The fans want it, too. In J.P. Hoornstra’s recent playoff roster poll, Baez has more votes than Kenley Jansen (initially observed by commenter Casey). He has certainly done his job in high leverage situations. Below is a table of every Dodger reliever with more than 20 innings pitched, sorted by shutdown to meltdown ratio. Shutdowns and meltdowns are Fangraphs win probability statistics: a shutdown occurs when a pitcher increases the team’s odds of winning by 6% and a meltdown occurs when a pitcher reduces the team’s odds of winning by 6%. A higher ratio is better.

Baez stands alone on top of the rest, and a lot of the rest of the list is generally in order of quality with a few exceptions.

So, Baez to setup, right? Unfortunately, this is not as clear-cut of a decision at it appears on the surface. Baez’ numbers are due for regression in several ways. First, there’s his BABIP. It currently stands at .183 after showing no particular batted ball hit suppression tendency in the minors. The BABIP is even more alarming when looking at splits: Baez has allowed a .143 BABIP in high leverage situations and an astonishingly low .077 BABIP with runners on base.

These batted ball numbers also provide a good reason why Baez’ ERA (2.01) is significantly better than his FIP (4.00). When sorting the same list of relievers by FIP, we get a slightly different story:

Baez goes from the top of the list to eighth, behind such notable names as Brandon League, Jamey Wright, and Paul Maholm (which, admittedly, shows the flaws of this methodology a bit). The only two behind him are Brian Wilson and Chris Perez.

Why is Baez’ FIP so mediocre? His strikeout rate is around 20%, a bit lower than the reliever average of 22.2%. His swinging strike rate (10%) and low looking strikeout rate suggest that the number might be slightly low, but not by a lot; his 6.85 K/9 is artificially low for a different reason, driven down by his low BABIP. The bigger driver of Baez’ FIP is the longball. Baez has allowed three home runs already, and that might not be a fluke. Baez’ HR/FB rate is right in line with the league average since he has been allowing a lot of fly balls. Of 253 relievers with at least 20 innings in 2014, Baez’ ground ball to fly ball ratio of 0.74 is 34th. He isn’t doing a great job of keeping the ball on the ground, which means that balls will travel out of the park more often. Baez’ fly ball heavy results partially explain the low BABIP but not to the degree of the actual results thus far.

These aren’t the only problems, either. Baez might be running out of gas. Below is a chart of his pitch velocity through the season: 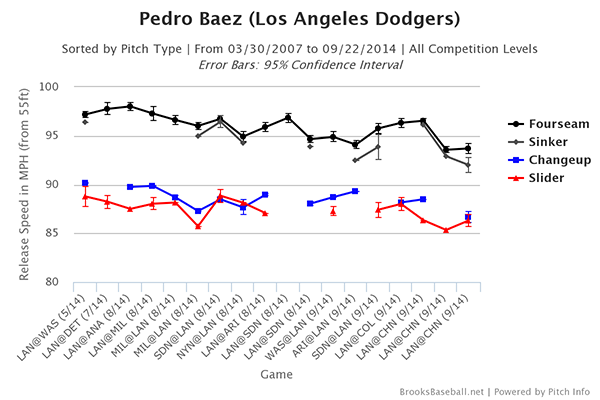 Baez throws his fastball around 3/4 of the time, so velocity is pretty important for him. He started out averaging 97, peaking at 98 in early August. He’s had some ups and downs since, but his final two games in Wrigley were down to about 93 on average. It’s important to remember that this is only Baez’ second year of pitching. Including his time in the Arizona Fall League last season, he pitched 62-1/3 innings. So far this season, he has pitched 64-1/3 innings. He’s in uncharted territory for his workload, so it’s worth keeping an eye on.

When you put all of these factors together, it starts to make the projection of a 4.30 ERA on Fangraphs’ depth chart seem not so ridiculous. That projection is the highest of any Dodger listed, including those who Baez are replacing.

So, what should the Dodgers actually do? It’s certainly not an easy decision with Wilson clearly not at his best and Howell struggling. My first inclination would be to use Howell in the eighth and hope that his control problems are temporary while playing matchups between League, Paco Rodriguez, and Baez before then if needed. It obviously isn’t a perfect strategy, and it depends on how deep the starters go into games (another major concern after the first two games), but I’m not really a believer in the hot hand.

Even with the huge red flags, Baez is probably a better option in the eighth than Wilson. The Dodgers just have to hope that the inevitable regression doesn’t begin at an inopportune time if they keep using him in higher leverage situations. Given how shallow the bullpen is right now, even if it’s slightly earlier than the eighth, there isn’t much of a choice other than hoping for it to continue.

Daniel Brim grew up in the Los Angeles area but doesn't live there anymore. He still watches the Dodgers and writes about them sometimes.
@danielbrim
Previous Giants 5, Dodgers 2: At least Dan Haren was good
Next A First Try At A Potential 2014 Dodger Playoff Roster