The story of Game 2 of the NLDS was largely about whether Don Mattingly should or shouldn’t have yanked Zack Greinke. It’s not a question anyone would have been asking if J.P. Howell had done his job, which was to get out lefties Oscar Taveras and Matt Carpenter. He didn’t, and so Mattingly’s choice became a big focal point. It’s understandable that the manager is going to be the brunt of the blame, but that also misses the bigger point: What’s going on with Howell?

In the first 135 appearances, including last year’s playoffs, of Howell’s Dodger career, he allowed three homers. In the last five, he’s allowed three homers. I’m tempted to say that this is a small sample size blip, that any trouble a reliever runs into is magnified because of how little any individual reliever is actually involved in a baseball game. I’m sure that’s part of it; Matt Carpenter being fueled by Satan is part of it too. It’s not just homers, though. In three of Howell’s last four regular season appearances, he allowed a run. It had previously taken 46 appearances for Howell to compile three earned runs. This just isn’t like him, and it’s happening at the worst possible time, in the playoffs for a bullpen where he’d previously been one of the only two dependable members.

A popular theory I’ve seen is that this is the fault of Mattingly or Ned Colletti, because everything must be. None of that makes sense, though. Mattingly didn’t overwork Howell, as far as I can see; Howell actually worked 13 fewer innings this year than last. Colletti’s inability to make bullpen upgrades didn’t affect Game 3, either, because an import would have merely bounced Carlos Frias or Jamey Wright off the roster, not pushed Howell out of a job. Whatever is going wrong is entirely based on the pitches Howell has thrown.

But what is wrong? Let’s dig into it.

Usually, you’d start with velocity, and there have been changes, but nothing that helps us:

For the most part, Howell hasn’t been throwing as hard as he did last year. Of course, this hasn’t been an “entire year” problem. He’s been wonderful despite that lessened velocity, and his September didn’t really look any different. It looks like he was throwing a bit harder in the playoffs, but don’t take that big jump to mean all that much, since it’s only been two appearances. Not a lot to see here.

Is he throwing different pitches? A little.

Continuing a trend of the last few years, Howell has basically given up on his change to become a complete sinker/curve pitcher. Interestingly, he’s gone away from the sinker a bit since August to focus more on the curve, but again I caution against reading too much into it: He’s only thrown 12 innings since Aug. 1, so it’s easy to skew a month. Of the three homers this year, two came off the sinker, and one off the curve.

So far, nothing stands out. He’s not throwing more grooved pitches. He’s not getting less movement on the pitches. There’s maybe some minor release point changes, but nothing that major. 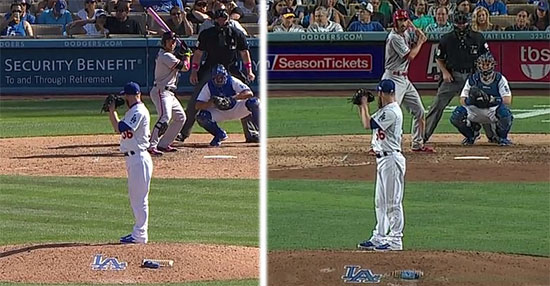 His back foot is in exactly the same spot on the mound. His front foot the other night is a bit ahead of where it used to be, but I have no idea if that makes a difference. It feels like it shouldn’t, because it just gets picked up anyway, but of course, I’m not a pitching coach. So there’s a thing, that is also maybe not a thing.

I’m starting to feel like I did when I tried to figure out why Justin Turner was playing so well this year, grasping at straws to come up with something. Did he miss his spot? Well, yeah, against Carpenter, he did a little, getting it more inside than A.J. Ellis was hoping for…

…but how does that help us? The ball was destroyed. Of course it didn’t go according to plan. Next, I figured I’d look into his heat maps for the “good” and “bad” periods, but found that was more troublesome than helpful. The September Howell looks like he’s thrown more fat pitches, but this is also with a total of about 100 pitches. Anywhere he’s hit more than once or twice is going to show up as bright red. Not to go back to sample sizes, but… sample sizes. That said, Howell has always been a fascinating pitcher to watch, because he’s never had overwhelming velocity, or pinpoint control, or a devastating out pitch. If, for some reason, he’s missing his spots even slightly for some reason, perhaps that’s enough.

Ultimately, I can’t see anything obvious here, and while that might just mean I’ve missed something, it might also mean there’s nothing to see. Howell has been very good for nearly two full years as a Dodger, and that shouldn’t be tossed out the window because he’s had a few bad innings. It might also explain why Mattingly felt confident bringing Howell in, because there was nothing to indicate that he shouldn’t. Hopefully, that’s a good thing, and that we’ll see the same Howell we’ve enjoyed for a while. Still, even I won’t pretend that I won’t be a little worried the next time I see #56 running out of the bullpen.

Mike writes about lots of baseball in lots of places, and right now that place is MLB.com.
@mike_petriello
Previous Inside Zack Greinke’s Season-Saving Start
Next On The Possibility Of Seeing Dan Haren Tonight