Last night’s game for the Dodgers was a must-win, and the Dodgers won. We’ll all remember J.P. Howell faltering and Matt Kemp delivering the lead in the bottom of the eighth, but Zack Greinke‘s fantastic start should not be overlooked. Greinke pitched seven innings, didn’t allow a run, and only allowed two hits. He struck out seven batters and walked two. I think the raw numbers sell the start short, though. Let’s dig into what made this start so amazing, beyond the timing.

My favorite way to judge the quality of a pitcher in a particular start, other than the raw numbers (K, BB, etc) is to count the number of swinging strikes a pitcher can induce. It shows how well they’re fooling the batters. Greinke only struck out seven batters last night, but his swinging strike numbers tell us more about how many bats he was missing in all counts. Last night, Greinke induced 21 swinging strikes in his 103 pitches. That’s an extraordinary rate for anybody, but particularly for Greinke. Baseball Savant’s database has tracked every pitch thrown since 2008, and Fangraphs has tracked swinging strike rates between the start of Greinke’s career in 2004 and 2007. Greinke has started 298 games during his career. Last night’s swinging strike rate of 20.4% was the second highest of those 298 starts. In the playoffs, in a must-win game, his second best start in that regard. Just think on that for a minute.

This might make a bit more sense in context. Last night, Zack Greinke had a 20.4% swinging strike rate. In 2014, Aroldis Chapman averaged a 20.0% swinging strike rate. Chapman struck out over half of the batters he faced this season. That’s how much Greinke was fooling batters, and he wasn’t even throwing 100. 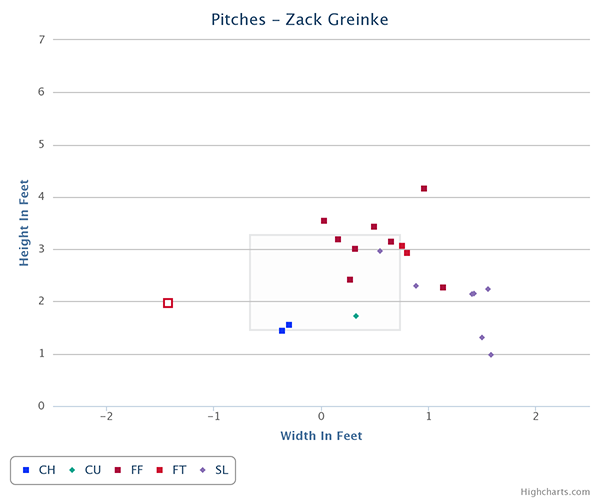 So, we’ve established how good Greinke was, but now we have to establish why. The first place to look is Greinke’s command and control. We saw what can happen to a great starter with occasionally lacking command when Clayton Kershaw blew up in the seventh inning of game one. Greinke didn’t have that problem, he was hitting his spots all night. This is a plot of all of his pitch locations from the start. Pitches to left-handed batters are mirrored, so all inside pitches thrown to either handedness of batter are on the left of the plot and all outside pitches thrown are on the right: 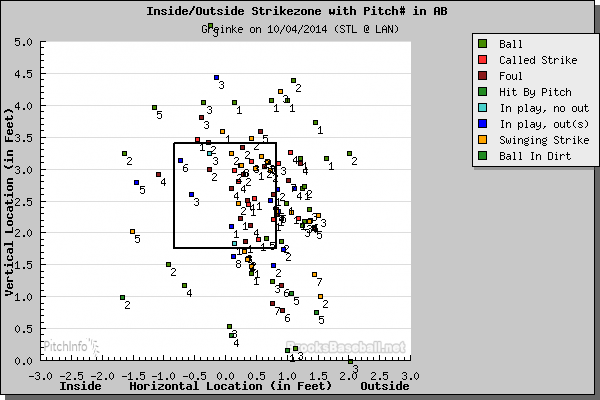 Greinke was living on the outer half, rarely catching too much of the plate or throwing inside. He was putting his pitches where batters would swing and miss; most of the pitches here are outside, and the overwhelming number of whiffs on the previous plot were in the same area. Greinke hit the second batter he faced, but only threw off the inside edge six more times, including one whiff by Peralta which got him out of his sixth inning jam.

The other, easy answer to why Greinke was so effective is velocity. Last night was Greinke’s 33rd start of the year. Below is a table with Greinke’s average velocity for each pitch and the maximum average from any of Greinke’s starts in 2014:

Other than the curve (for which the average velocity isn’t as important), last night’s velocity was close to the hardest that Greinke has thrown all season. The four seam fastball was effectively a tie, the slider is just barely behind the max, and the two-seam and change are really close to the hardest he’s thrown this year as well. If not for one start against Milwaukee in August, three of the average velocities would have been season highs.

Not only was his fastball faster than usual, but it had more movement (departure from zero is what defines total movement in this case): 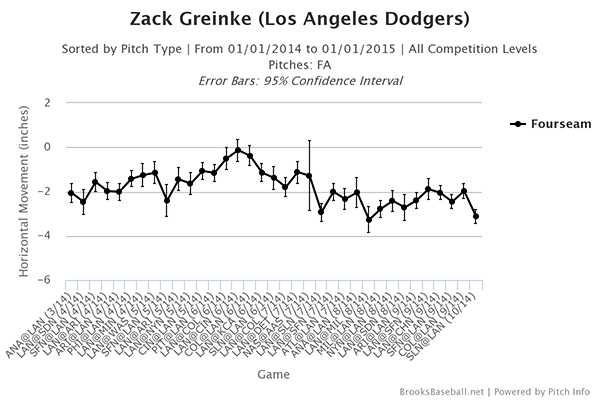 The highest amount of horizontal movement on Greinke’s fastball this season was 3.28 inches, in that same Milwaukee start mentioned earlier. Last night, Greinke averaged 3.12 inches of horizontal movement, the second highest of the season. This led to nine whiffs on the pitch (of 41 thrown), including this one by Matt Holliday:

The pitch was actually a mistake, Ellis wanted it low but got it high, which happened on several other fastball whiffs as well. In all of the instances where Greinke missed up, he didn’t miss over the plate, so batters still couldn’t do anything with it. The pitch wasn’t where Holliday was expecting it to be, and he swung through it.

Greinke uses his change primarily to combat the platoon advantage. Last night, he threw 15 of them, 12 of which came to left-handed batters. They whiffed twice, including this one by Kolten Wong.

The representative fastball GIF was a missed location. This change, though was perfect. Ellis set up low and away, and that’s exactly where Greinke put it.

There’s also the curve. Greinke changes speeds on it quite a bit. Last night, he threw curveballs as hard as 75 mph and as soft as 68 mph. It’s more of a freeze pitch than a whiff pitch (which is one reason why Kershaw’s swinging strike rate has not been particularly high before this season). He only got one swinging strike on the pitch, but it was a good one.

(Yes, this GIF has been in three straight Dodgers Digest posts. I don’t care, it deserves it.)

The GIF doesn’t show the base situation, but that whiff by Peralta occurred with two runners on and two out in the sixth. Greinke got Peralta to miss on an inside two seamer two pitches later to end the biggest Cardinal threat of the start.

In my opinion, Greinke’s best pitch is his slider. When it’s working, it’s up there with my favorite pitches on the Dodger staff. He went away from it for awhile last year, but this season it is back and with a vengeance. He uses it primarily against right-handed batters, trying to get them to swing at the pitch low and away. 35% of the pitches Greinke threw to right-handed batters last night were sliders, and they whiffed seven times. Here’s the wildest swing on Greinke’s slider (furthest out of the zone), so sorry to Jhonny Peralta if it seems like we’re picking on him. Greinke missed out on this pitch, but most were right at the glove.

Greinke was lights out for seven innings. You can’t really ask more than what he delivered in that span, on that stage. That’s not even including the two hits he had with his bat, matching what he allowed as a pitcher. He also scored a run and terrified us when he slid headfirst into third base. So, why remove him after seven innings and 103 pitches? We all know how much more comfortable it is when a Dodger starter hands the ball directly to Kenley Jansen. When asked about the choice after the game, Greinke said this:

Mattingly and Greinke discussed his exit before the 7th. Greinke said it was "sort of both our calls."

So, good on Greinke and Don Mattingly for knowing the starter’s limits. Greinke was cruising through five innings, but in the sixth inning he threw 20 pitches, mostly from the stretch after surrendering a lead-off double to Matt Carpenter. He also threw 15 more pitches in the seventh inning, so he was pulled as the eighth inning began. The platoon issue was definitely there, too. Greinke had a 28% swinging strike rate against right-handed batters last night, but just 6% against left-handed batters. The first three batters of the eighth inning were all left-handed. Howell should have gotten the job done with the platoon factor in mind. Greinke was also about to start his fourth time through the order, which also brings a penalty to the statistical expectations. All of those factors mean that the decision to remove Greinke was the right one.

Even though he only made it through seven innings, what an incredible performance by Greinke. This is why the Dodgers paid him all of the dollars; Kershaw faltered, but now the rest of the series is basically a coin flip instead of being almost over. He needed to pick up the team after the unexpected need to leave Los Angeles with a split. All he did was pitch the game of his life. The timing for one of the best starts of his career could not have been any better.

Daniel Brim grew up in the Los Angeles area but doesn't live there anymore. He still watches the Dodgers and writes about them sometimes.
@danielbrim
Previous Your ‘Dodgers win Game 2 of the NLDS’ GIF post
Next What’s Wrong With J.P. Howell?