The Dodgers are reportedly one of the finalists in the sweepstakes for left-handed reliever Andrew Miller, Jon Heyman of CBSSports.com wrote. Miller is entering his age-30 season and is reportedly expecting a four-year deal that will pay him around $40 million.

Even with recent moves for depth, the Dodgers bullpen is still lacking in shutdown arms behind Kenley Jansen, so it’s understandable that the Dodgers are in on marquee relievers. However, it’s not news that relievers signed to multi-year deals, much less four years, generally end up more worse than better. No matter how bulletproof a reliever appears to be, the inherent volatility due to sample size, health, and luck simply make long-term deals a risky proposition. Just look at these recent examples: 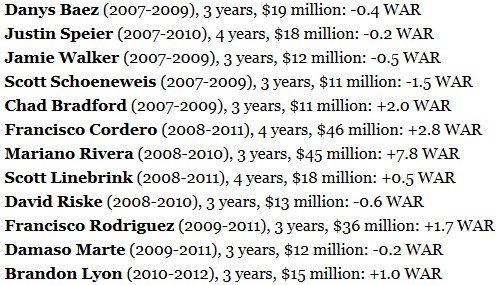 That’s not to say signing Miller can’t work out, just that the odds are against it, especially since he’s soon to be on the wrong side of 30. Furthermore, he doesn’t have a long history of elite performance. Working primarily as a starter from 2007-11, Miller was awful, posting an FIP of 4.69 and an ERA of 5.70. In relief, though, it’s been a different story. He has a career 3.38 ERA and 3.02 FIP out of the pen, and his conversion culminated in his elite 2014, in which he posted a 2.02 ERA and 1.51 FIP, and landing Boston a very good prospect in Eduardo Rodriguez when Miller was dealt to Baltimore in July.

But was there a reason for his breakout 2014 after posting good but not great years for a couple seasons? Or was it just a matter of reliever volatility? Jeff Long at Baseball Prospectus broke it down and found that a combination of improved mechanics, better command in the zone, and a bump in velocity led to his breakout.

It’s unclear what impact the tweak in mechanics, improved command, extra velocity in a relief role, or change in pitch usage has had on Miller’s performance. It’s extraordinarily difficult to attribute Miller’s 2014 performance on any one or more of these factors, as they’ve built upon one another—and perhaps with other variables that have simply made his stuff nastier. To say that 2014 is a result of simple tweaks that he made during the offseason would be a misguided oversimplification. This season has been years in the making, quite literally.

So things did change, but nobody really knows why it clicked or if he could get untracked again sooner than later. After all, even with current scouting reports and with known mechanical changes as the reason for improvement, there’s no guarantee that it’ll all stick. Dodgers fans should be familiar with this phenomenon since Brandon League is notorious for struggling to find his release point, Matt Kemp‘s swing and stance changes almost yearly, and James Loney was a known tinkerer that could never find consistency.

This is all not to say I’m flat-out against the Dodgers signing Miller, but there’s ample reason for pause and it’s hardly a slam-dunk guarantee that he’ll be the second closer at the back of the bullpen even in 2015, much less 2018. If Miller does end up in Blue, obviously I hope that he bucks the trend, but the length and dollars in the rumored contract are concerning, and that worry is backed by both Miller’s short history of elite performance and the history of the relievers on multi-year deals that came before him.