When the Dodgers claimed Juan Nicasio off waivers last month, it was assumed that he was acquired mostly to pitch in relief. Ignoring the fact that the depth chart would currently have him start, it’s not necessarily a bad idea. Nicasio struggled significantly as a starter for Colorado in the first half of last season. He relies heavily on two pitches, so sustained success as a starter seems like a stretch.

Nicasio returned from the minors as a reliever last August, so this experiment has already begun. Here are how his results changed following the move:

All of the results are better! Nicasio’s ERA, FIP, and xFIP all decreased in relief. His fastball velocity went up, his swinging strike rate went up, his strikeout rate went up, and the walk rate went down. They’re not “relief ace” numbers by any means; Nicasio’s HR/FB was still very high, and his swinging strike rate was still below average for relief pitchers. Still, it seems like a much better use of his talent than starting was, at least so far.

Let’s focus on Nicasio’s fourseam fastball, specifically. Here is what the pitch looked like before and after his move to the bullpen, compared to the fastballs of the rest of the league. Velocity and vertical movement show how unique Nicasio’s “new” fastball is in particular: 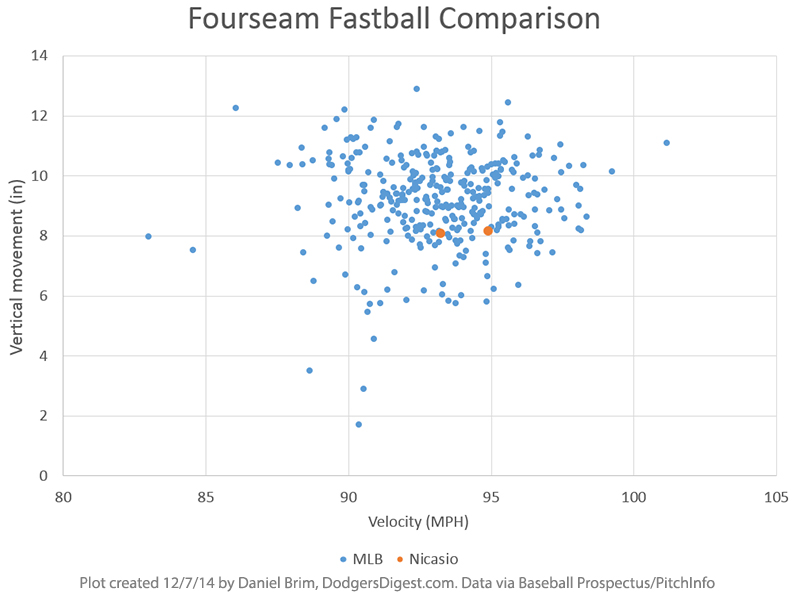 There were 333 pitchers (other than Nicasio) who threw at least 200 fourseam fastballs in 2014. You can see that Nicasio, as a starter (left point), is somewhere in the middle of the pack. However, after he gained velocity in the move to relief, he suddenly moved to a unique area of the plot. His increased velocity did not result in a loss of “heaviness” (lower vertical movement). There are only 11 pitchers who have fastballs both heavier and faster than what Nicasio threw in relief.

The best way to compare Nicasio’s fastball to other pitchers is to search by standard deviation (basically, drawing a box around the Nicasio relief point). Restricted by +/- 1/3 standard deviation for both vertical movement and velocity, here are the pitchers with similar fourseam fastballs to what Nicasio threw in relief:

There are some good pitchers and mediocre pitchers on the list, but we’re talking one pitch specifically. We can use the same method to find comparables to Nicasio’s fastball as a starter, then look at how the results change for each pool:

The good news for Nicasio is that the results for the similar fastballs improve significantly. As a starter, his fastball was in an area which would generally have below-average swinging strikes and an average ground ball rate (his results were a tad better than that). As a reliever, a fastball like his was expected to generate above-average swinging strike rate and ground ball rate. Not bad!

That’s all well and good, but when we look at pitch usage things start to get really weird. Nicasio’s overall usage percentages didn’t change all that much (other than dropping the changeup, which he rarely used before he switched roles) after he switched to relief. However, the change becomes visible when looking at platoon pitch usage, specifically against left-handed batters: 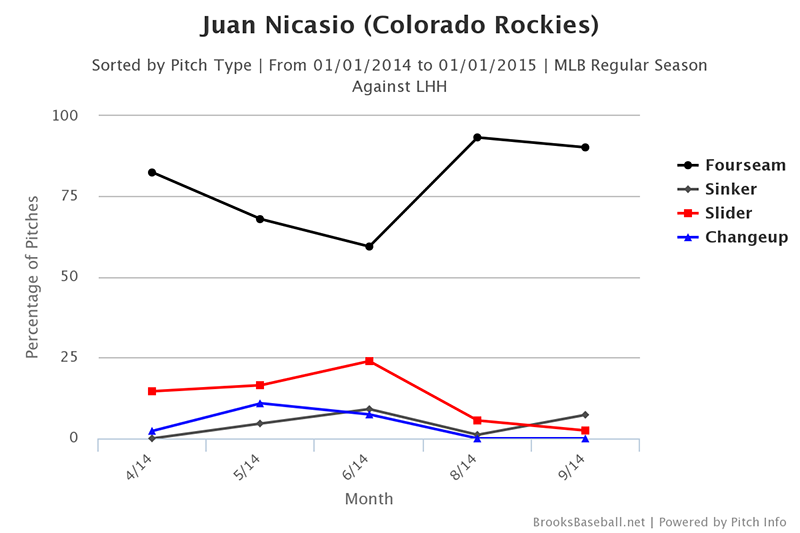 Not only did Nicasio throw the fastball to lefties almost all the time, but he changed his pitch location patterns against them pretty significantly. The table below is the location usage change in each zone per Brooks Baseball. A positive number means that usage increased in a particular zone following Nicasio’s move to the bullpen, and a negative number means that usage decreased in a particular zone. The table is from the batter’s perspective. On the outside of the table is the total increase or decrease in usage for each particular row or column:

Nicasio significantly increased his usage of fourseam fastballs up. He also shifted the location of the pitches away. Per Baseball Savant, here is how he pitched to lefties in relief: 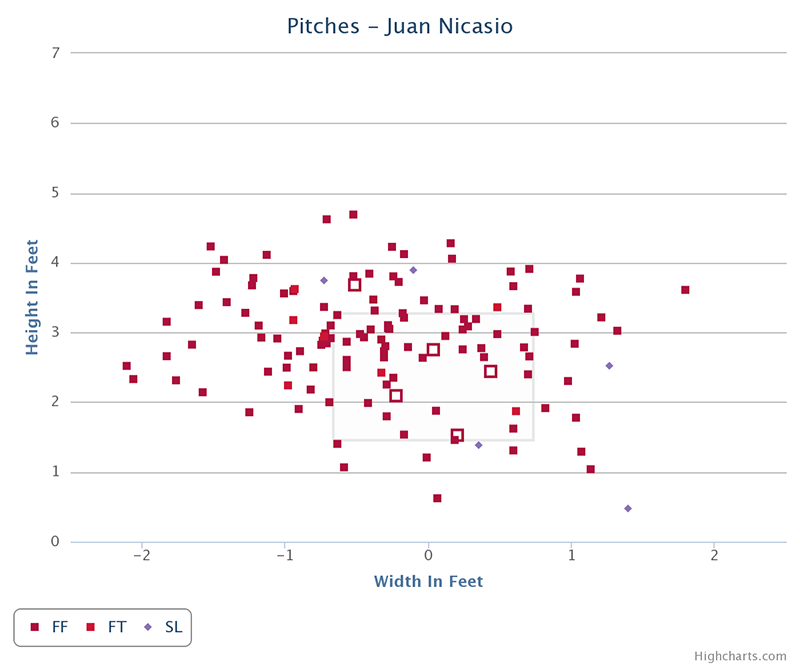 Per the pitch tags on Baseball Savant, 40.2% of Nicasio’s pitches to lefties were fourseam fastballs on the upper/outside corner of the zone or off the plate in the same area. If Nicasio did this for a full season, that usage would have been the highest rate by a right-handed pitcher in the majors by a significant margin. The next highest percentage was (tall) Chris Young at 32.4%, followed by Craig Kimbrel at 30.5%. Both of those pitchers made it work, but both are very different types of pitcher than Nicasio and varied their pitch selection more than Nicasio did.

The craziest part about all of this is that it actually worked. Here are Nicasio’s fourseam fastball whiff rates, split up by batter handedness: 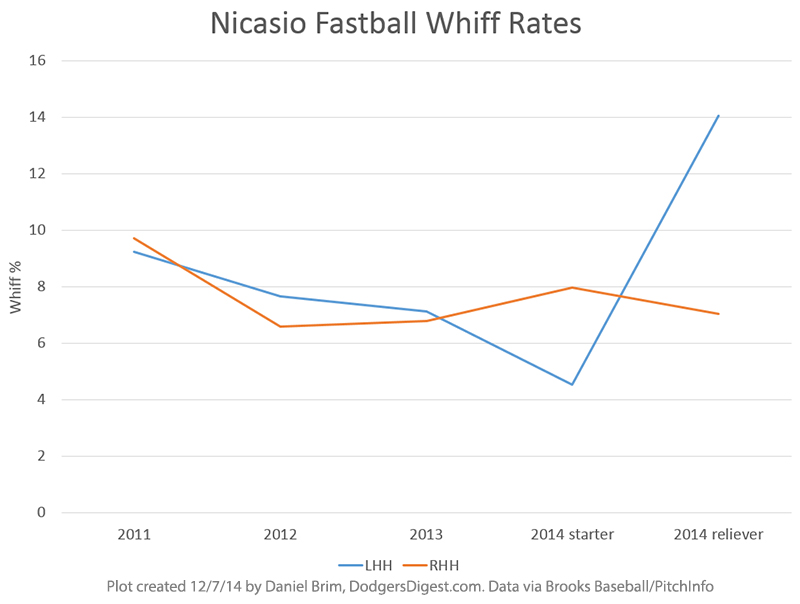 The whiff rate by left-handed batters against Nicasio increased dramatically after his move to the bullpen. This is despite using one pitch over 90% of the time and being very predictable with location. It was established before that Nicasio’s relief fastball is unique, but there isn’t really a precedent for the chart above. Maybe the platoon split whiff rates tell us something about how he would perform against the opposite handedness of batter (much like one year of a hitter’s platoon splits tells us almost as much about his hitting skill against both types of pitchers than it does against the single type), but it’s still really, really strange. On the surface, this seems like a thing which cannot continue long-term. But, maybe the depth of Nicasio’s slider improves at sea level, too.

Overall, getting Juan Nicasio as a relief pitcher is not a bad gamble. He’s not going to be Andrew Miller, but at about a $2 million salary and with an option remaining, he doesn’t have to be. There are some wrinkles to iron out, but Nicasio did show some promise in his 19 relief outings. Still, he’s going to have to change his usage pattern one way or another, so it seems prudent to expect some growing pains.