Ben Rowen and the Unprecedented

That’s Mike Trout, grounding out on an 81mph “fastball” in the place where he likes the ball most. Trout makes more outs than not, of course, but there’s still something fascinating about all of this. Rowen has one of the lowest arm slots we’ve seen in quite some time, and since it’s January, it gives us something unique to talk about. Rowen might not be very good (he passed through waivers unclaimed just one month ago, and projections have him around a mid-4 ERA) but that a pitcher like him can make it up to the majors at all makes for a fun story. He throws strikes and gets grounders, so there’s at least something to it.

Specifically, let’s talk about Rowen’s sinker, featured in the above GIF. He throws it almost 80% of the time, and it generates a lot of ground balls. In order to better understand what makes Rowen’s sinker unique, it’s helpful to see what all sinkers look like. Here’s a plot with sinker horizontal and vertical break for every pitcher’s sinker (min 100 thrown per season) since Pitch FX started tracking in 2007. The data is sourced from the Baseball Prospectus Pitch FX leaderboard. There are 2253 points total. 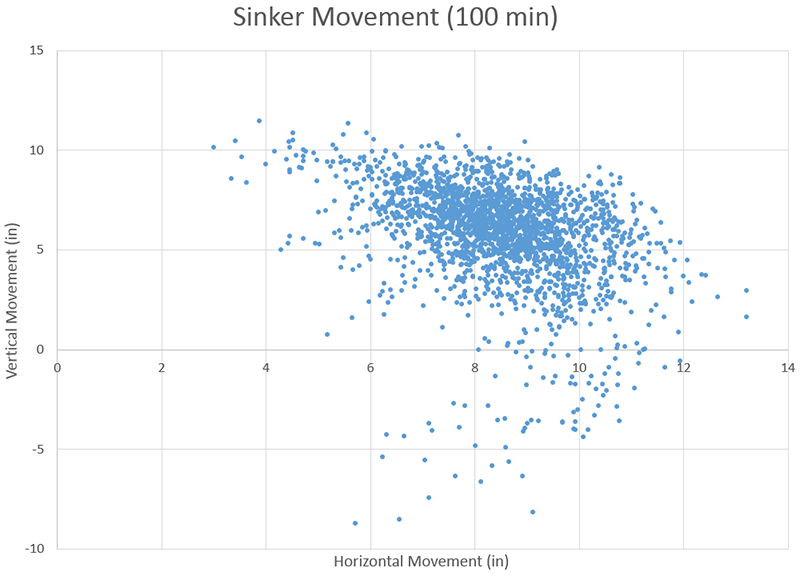 Most of the sinkers on the plot don’t actually “sink,” in that they have a positive vertical break. The sink in most sinkers comes from the perception of drop, since the pitch has less backspin than a regular four seam fastball (which typically has between +8 and +11 inches of vertical break). There is still some backspin present, though, since a vertical break of 0 is how a pitch would theoretically move with no spin.

However, there’s a portion of the graph that splinters off from the rest. These are mostly side-arm and submarine pitches, who manage a vertical break less than zero. The lower arm angle with the same grip means that the pitch spins with a different axis than a traditional sinker. What would be backspin with a more traditional arm angle is side-spin when the arm is dropped. What would be side-spin is resolved as “sink” in the more traditional sense.

Here is the same chart as above, with Rowen and some comparable pitchers: 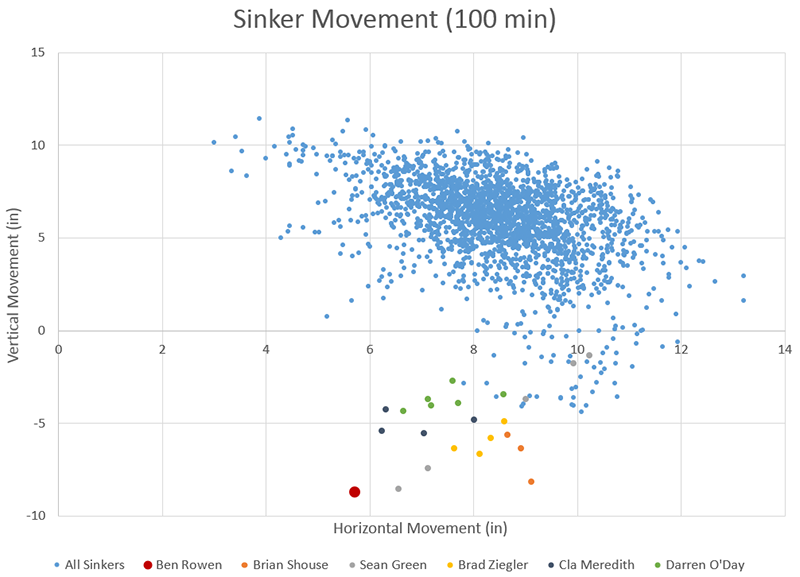 Rowen stands alone. His sinker had the most drop of the 2253 points. The five pitchers with similar vertical break all threw sidearm. Here’s how they compare, specifically.

O’Day is a recognizable name, a late-inning reliever for a team that reached last year’s ALCS. He averages around 87 miles per hour (harder than Rowen), but he is not much of a ground ball pitcher. O’Day depends on a significantly different pitch usage pattern, limiting the power of this comparison. In 2014 he threw 44% sliders, 31% four-seam fastballs, and just 23% sinkers. It’s not a great match.

This is a much better comparison. Meredith managed a six year career as a major league reliever, and like Rowen he relied on just a a sinker and slider. The pitch usage proportions, particularly towards the end of Meredith’s career, were similar to what Rowen used last year as well. The biggest difference is that Meredith’s sinker averaged around 86, faster than Rowen’s 80. Meredith posted a career ERA- of 89 and FIP- of 94, which are very respectable, especially considering the low velocity. He wasn’t a strikeout pitcher (career 15.8% strikeout rate) but he threw strikes and generated a 66.3% ground ball rate. The results are similar to Rowen’s best-case scenario. After six years of relative success, Meredith suffered through a series of elbow injuries, culminating with Tommy John surgery in 2011. He has not pitched in professional baseball since.

Ziegler should be familiar to Dodger fans due to his divisional proximity. Like Meredith, he throws 6-7mph faster than Rowen. He also mixes in a change, which Rowen does not have. Ziegler has enjoyed a lot of success in his career, posting a career 64 ERA-, 84 FIP-, and a 65.8% ground ball rate. He’s probably one of the more underrated relievers in the National League. Ziegler misses more bats than Meredith (and more than Rowen has in the minors), but he is known to suffer from the same platoon issues which plague a lot of low arm slot pitchers.

It’s hard to see on the graph, but Green has some points in the main pack. His later career sinkers drifted closer to the area we’re looking at. Green’s 2011 season was the leader in average sinker drop before Rowen beat it last year. Green’s velocity fell a lot as his career wound down, bottoming out at an 86 mph average in the aforementioned 2011 campaign. In the high sink years, Green also relied on only a sinker and a slider. Green’s overall numbers in those years were not great, since he struggled to throw strikes. Still, when batters put the ball in play they produced an above-average number of ground balls.

The similarities between Shouse and Rowen are striking beyond the sink, too. Shouse relied on sinkers and sliders almost exclusively in the later parts of his career, and the usage rates were similar to what Rowen used last season. The velocities were much closer, too: 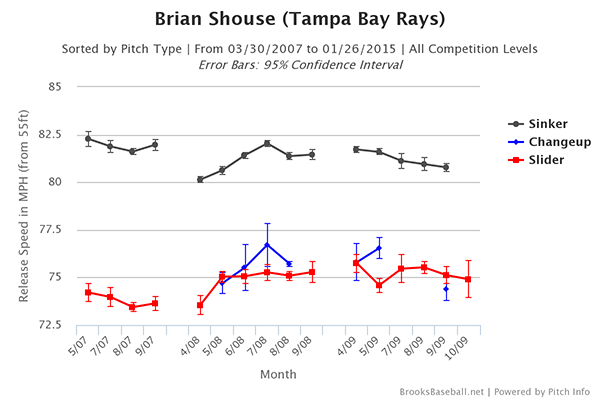 The pitches were still faster than Rowen’s, but they are much closer than the other comparisons. Shouse’s late-career renaissance left him with a 15.5% career strikeout rate, an 82 ERA-, 91 FIP-, and a 56.9% ground ball rate in 350-2/3 career innings. That’s a lot of success for somebody who didn’t throw hard and wasn’t a regular until his mid-30s.

There is one significant difference which makes Rowen’s path more difficult than Shouse’s: Shouse is left-handed. Rowen will likely have the platoon advantage more often than Shouse did, but Shouse had a larger advantage to work with. Shouse is the best comparison available, but even that has its limits.

There is a surprising amount of major league success among pitchers with similar profiles to Rowen. The pitchers with similar sinkers generally throw harder than him, but they also threw with less sink. All of them dealt with platoon issues to some degree, but in today’s game that is easy to manage around. There’s also survivor’s bias here, since pitchers who got stuck in the minors don’t show up in the search query.