Many have been asking about Joc Pederson lately, and understandably so because he projects as the starting center fielder for a team with World Series aspirations. A lot of the questions we field about him seem to be out of concern; concern that he hit .143 in a big-league trial last year, concern that he struck out 149 times in AAA last year, and concern that he has holes in his swing.

To those asking, needless to say, you’re not alone:

Pederson struck out 149 times last year, leading some skeptics to believe his long, aggressive swing will be easy prey to more-experienced, harder-throwing pitchers in the major leagues. That many strikeouts could translate to 200 or more, they say, if Pederson plays a full major league season. Ryan Howard led the majors with 190 strikeouts in 2014.

All the concern is understandable, and being skeptical of any prospect is generally the right way to go. Heck, the Dodgers and Joc thought he could improve as well, which is why they made adjustments to his mechanics and approach in the off-season.

After seeing him bat .143 and strike out 11 times in 28 at-bats after a September call-up, Dodgers coaches met with Pederson before sending him off for the winter. Pederson wouldn’t elaborate on what aspects of his approach they wanted him to change, but he said he benefited from their advice and refined his play during winter ball in the Dominican Republic and at a winter development camp.

Pederson making adjustments has been mentioned in other interviews and articles as well, but a lot of what’s been said has been rather lacking on specifics, so I decided to take a look for myself. What I found were rather obvious setup and swing changes that should benefit him in the long run and are arguably already paying dividends. 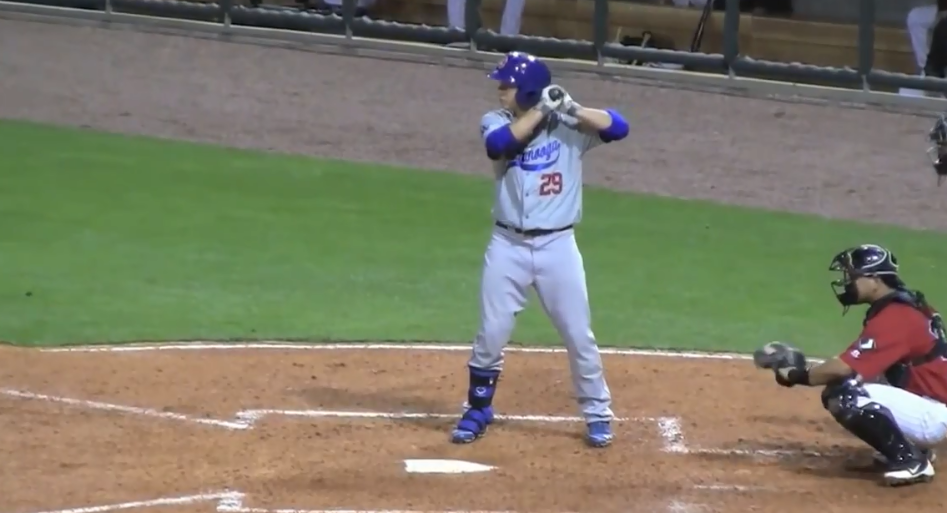 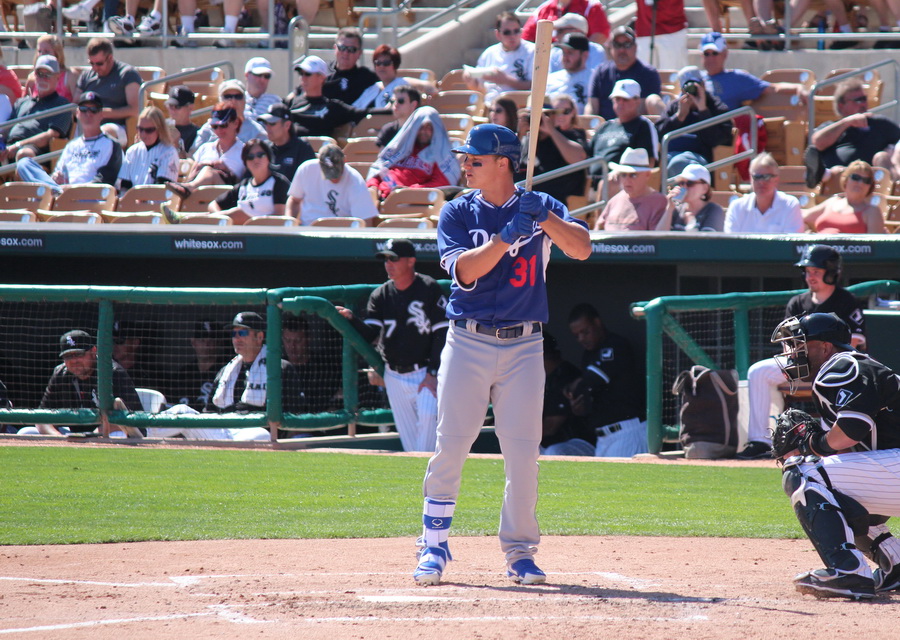 The setup itself doesn’t affect the swing, but change here is generally a sign that adjustments have been made and that the new setup is to help the batter implement the changes. Joc is now holding his hands and bat in front of his body, he’s slightly more open, and he’s more upright. Again, none of this matters yet, but it all carries over into the next phase. 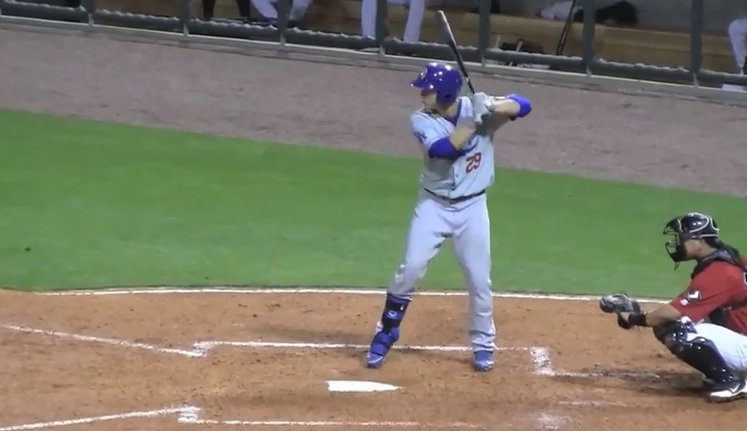 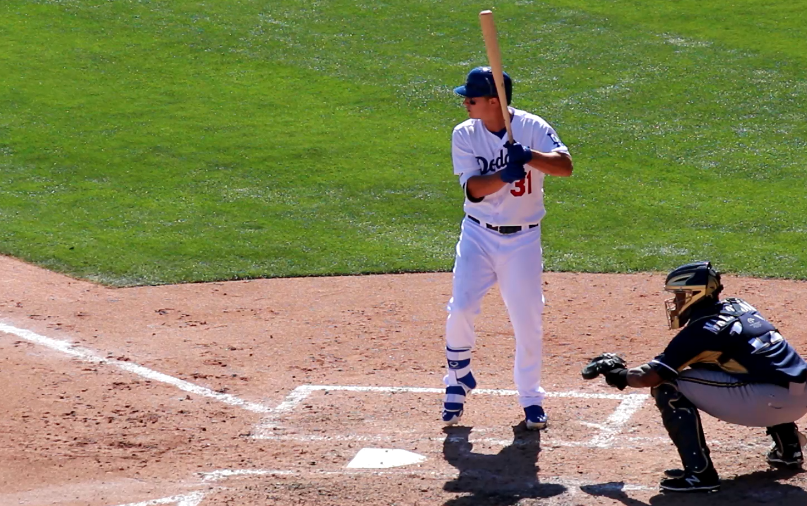 At the start of the timing phase for his leg lift, he’s essentially identical, except that he’s still holding his hands and the bat in front of his body… 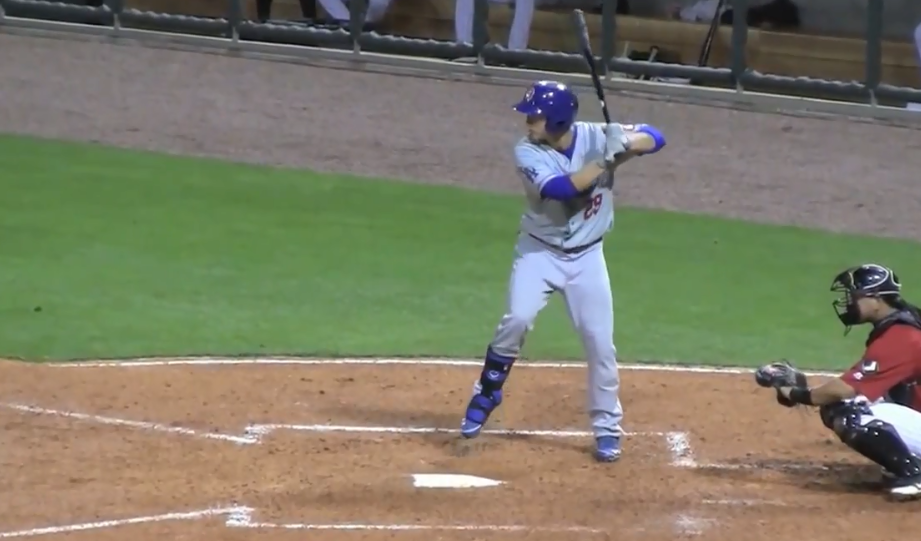 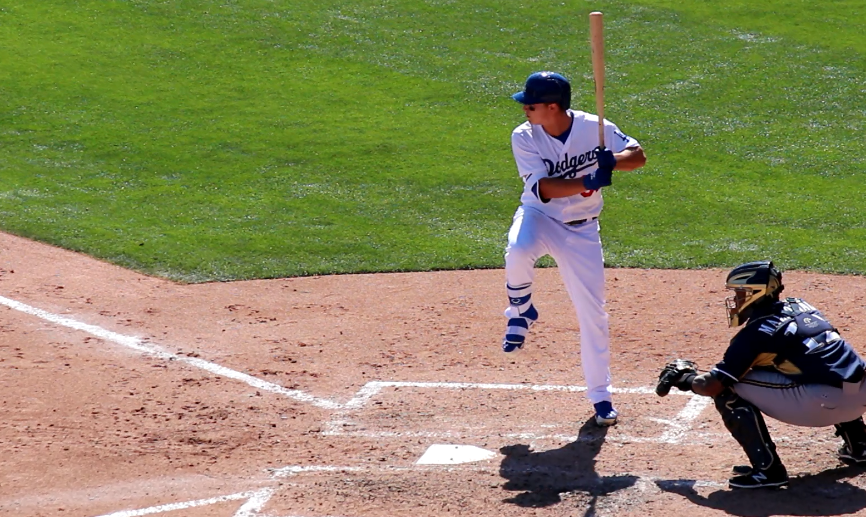 …and at the apex of his leg lift, we can see two things: 1) the bat wraps around his head less and is held lower (check the elbow height) 2) the height of his leg lift has increased dramatically.

The relative importance of the bat position will show itself soon, and the height of the leg lift is relevant because it forces him to transfer his weight. The result of the more pronounced weight transfer is that the increased force at footstrike helps Joc generate more torque with his lower half as he anchors that lead leg into the ground. 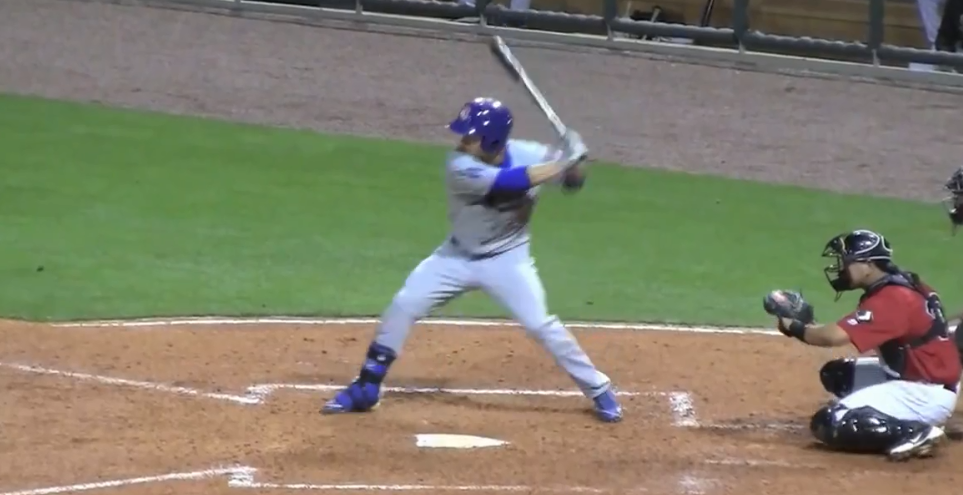 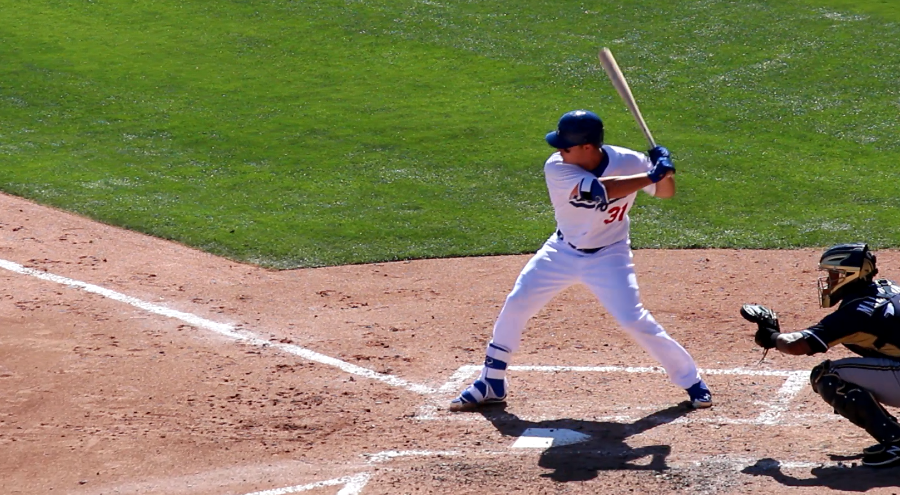 This is Joc at footstrike, and it’s actually a bit hard to see what’s different here from this slightly elevated side view, so let’s go to the TV view: 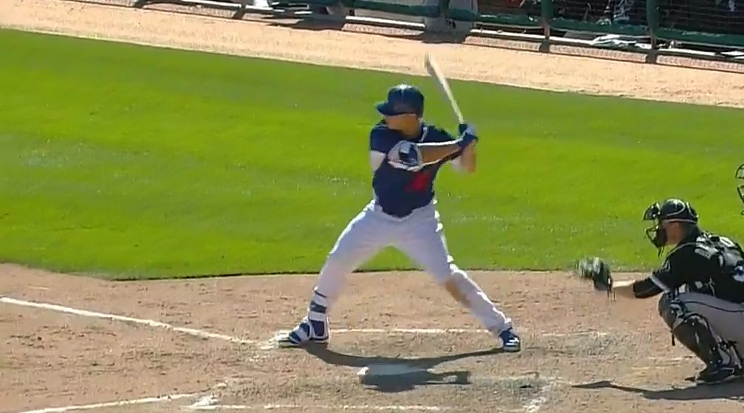 I know it may still look the same at first glance, but in the 2015 capture, Joc’s bat is flatter already (elbow, again) and there’s less of a wrap (middle of the helmet vs. back of helmet). The less pronounced wrap helps shorten the swing a bit, and getting flatter sooner is important for Joc because the steeper downward angle his long swing enters the hitting zone at, the less time the barrel will actually spend in said hitting zone.

In effect, the adjustment is designed to help Joc keep the bat in the hitting zone longer, which should help him make more contact. Getting the swing plane and bat path correct is what helps hitters like Albert Pujols to make so much contact. 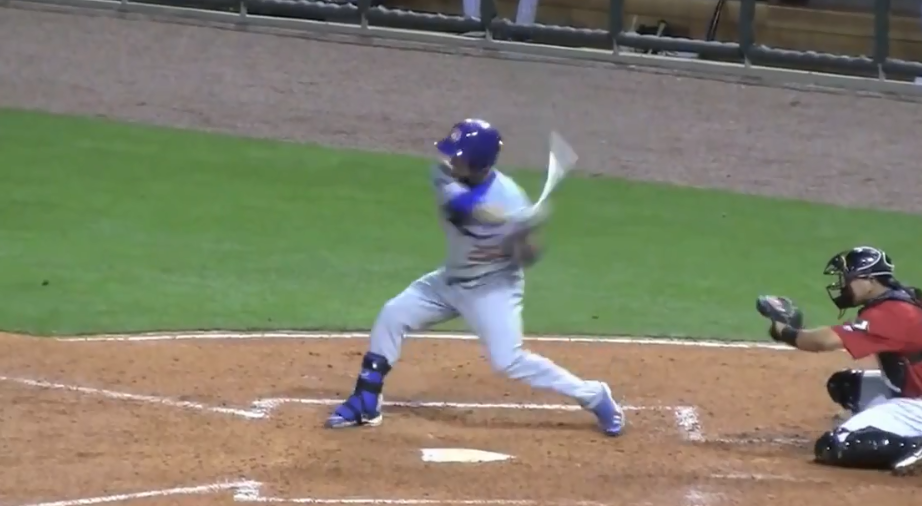 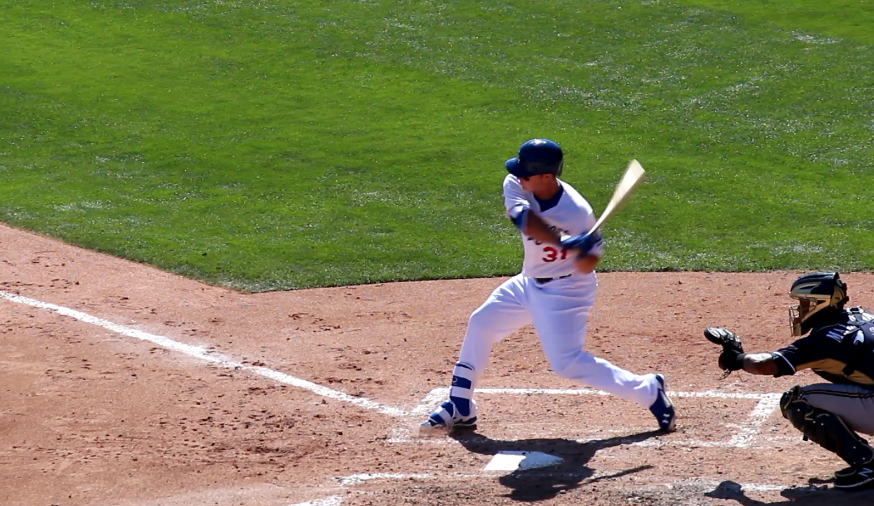 Again, it’s a bit hard to tell here, but the TV view helps: 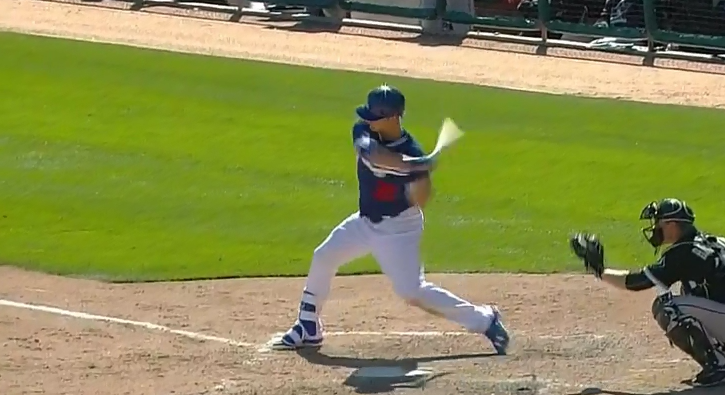 The bat enters flatter through the hitting zone, and he’s achieving that without dropping his back shoulder. Plus, the front side has firmed up and I believe he’s using his lower half better with the increased leg lift, which should help compensate for any pop lost from the more conservative bat wrap.

Overall, Joc’s weight transfer is improved due to the higher leg kick, and it has allowed him to firm up his front side better. The change in his setup and all that is superficial to an extent, but if that’s what helps him start his bat in a better position to get through the hitting zone, then so be it. And it certainly seems to be working, because he’s taking a better angle of approach, which helps the barrel stay in the hitting zone longer, and that should help Joc achieve more frequent contact. It’s not a huge revamp or anything, but he didn’t really need one to begin with from my view.

Also, for what it’s worth, what Joc is working on isn’t exactly an uncommon adjustment either, and for an extreme example of it, check out Joey Gallo‘s progress or what Javier Baez is probably going to have to do at some point.

Now is this going to fix Joc’s strikeout problem? No, because like I said in the mailbag, the strikeout problem’s main factor is not his swing but the way he approaches plate appearances (passivity/selectivity) and the type of player he is (power threats are going to have longer swings). Also, his timing is more complicated than most and he does have a tendency to get pull happy. That said, the point is not to make him a contact hitter, the point is to make it so that strike outs don’t prevent him from being a productive player at the MLB level. It’s so that 149 strikeouts in AAA stays around that level in the MLB and doesn’t turn into 200 strikeouts like the skeptics are predicting. And I think the adjustments that have been made give Joc a better chance to succeed at avoiding the pitfall of a low contact rate.

Fortunately, and I’m sure this is a relief to both the Dodgers and Joc, it’s so far so good. Of course, the real test will come during the regular season, but at least he’s clearing one hurdle by likely winning the starting job with a .436/.476/.769/1.245 line and 10 strikeouts in 42 plate appearances in Spring Training. What Joc has done seems to be paying off, and he has given every indication that we’ll be seeing more contact from him in 2015.