Not much time for a game thread today. Hope everybody is enjoying their Mothers’ day.

The Dodgers arrived to a field that looked like this:

Now the field is clear and apparently ready for baseball. Pretty impressive, actually. Temperatures are in the 40s, and it’s sad that we can’t see Cold Puig in action: 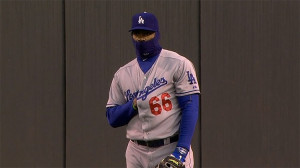 Speaking of Puig, he will now have an MRI on his hamstring tomorrow rather than today. It’s fantastic that the Dodger offense has been doing so well without him, otherwise the bungling of his return would have been a much more significant issue.

Clayton Kershaw may actually be thankful for the cancellation yesterday, because he has a much better lineup supporting him than what was slated before. There are still a few players resting, but at least Joc Pederson and Adrian Gonzalez are going to play and Chris Heisey isn’t leading off. Scott Van Slyke missing a game against a lefty is confusing, but overall there’s less to complain about. Still, it’s about time that Jimmy Rollins stops batting second.

Daniel Brim grew up in the Los Angeles area but doesn't live there anymore. He still watches the Dodgers and writes about them sometimes.
@danielbrim
Previous With the Dodgers 2-4 in his starts, is Clayton Kershaw’s career in jeopardy?
Next Dodgers 9, Rockies 5: Team slugs past Kershaw’s death by paper cuts