Solo shots by Andre Ethier and Jimmy Rollins, with a two-run bomb by Alex Guerrero in between, gave the Dodgers a four-run lead in the eighth inning and broke a 2-2 tie.

That’s not to underplay the other side of it though, with Brett Anderson turning it yet another quality start, going seven innings and allowing only two runs by limiting the Braves to nine baserunners. Adam Liberatore followed with a perfect inning and ended up with the win after the offensive explosion.

For the ninth, Chris Hatcher entered in an attempt to save Kenley Jansen the inning, but gave up a solid lead-off double and then triangle bloop single between three Dodgers in right, which gave Jansen TEH SAVEZ!!! situation. Jansen entered and gave up basically nothing, striking out one but allowing an inherited run to score on a ground out, making the final 6-3.

Despite the relatively comfortable final score, the frustration was building all night considering a bunch of fails earlier in the game.

1) Joc Pederson led off the game with a double and Jimy bunted … which I can’t really disagree with at this point, but makes you wonder why he’s batting second. Either way, he bunted right in front of the catcher, and it ended with Joc getting thrown out at third. Later in the inning, the Dodgers scored on an Ethier walk but stranded the bases loaded, so god knows what that cost the Dodgers.

2) In the seventh, after a walk and a hit, Jimy came up again and yet again screwed up a bunt, leading to a force out at third. It was an inning where again the bases were loaded and the Dodgers only scored on an Adrian Gonzalez soft grounder, so who knows what an extra out or base would’ve brought.

3) For his part, Scott Van Slyke was setting himself up to be the goat today, stranding the bases loaded in both the first inning on a popup and third inning on a double play, and he struck out twice. Not the best of days.

Given all that opportunity, it was going to be another long night of freaking out had the trio of heroes not saved bloggers from the impending mess. And for that, I’m thankful.

-Homer aside, I have to wonder how much longer the Dodgers can tolerate Jimy starting, much less the two-hole, unless something turns around in a hurry. Even though I wrote an article about his impending regression to the mean probably not being quite as great as many might assume, I still thought he would be doing better than this by now.

-The Dodgers totaled 16 baserunners today, their most since May 15. Probably not a coincidence that they matched their run output for like the previous week as a result. 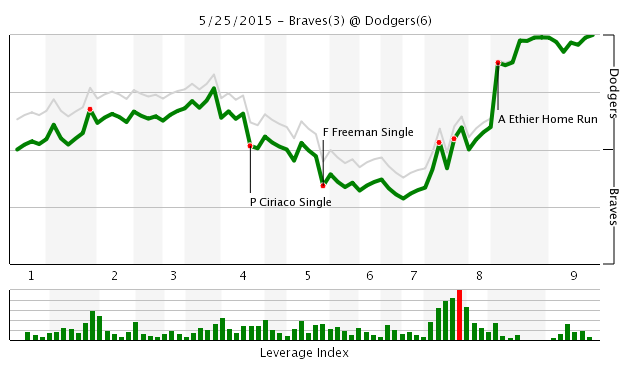