Pirates 5, Dodgers 4: No Pitching Duel, No Fielding Of Bunts As Well

Clayton Kershaw brought a scoreless streak of 37 innings into today’s marquee match-up with the Pirates and Gerrit Cole, but that streak ended after one pitch to Gregory Polanco, which he deposited over the fence in right center. That basically set the tone for the night, as both Cole and Kershaw didn’t have their best command or stuff, and the two combined to give up a combined seven earned runs in their 12 innings of work. Kershaw stuck out five in six innings but gave up four runs on nine hits and two walks. Cole also went six innings and also struck out five, surrendering three runs on four hits and three walks. Kershaw’s start didn’t necessarily come back to haunt the team, but confusing miscues did, as the Dodgers fell to the Pirates 5-4.

It was a back-and-forth affair all game, with Polanco hitting the aforementioned lead-off homer before the Dodgers scored two on a Howie Kendrick infield single (yes, really) to take the lead. Then Kershaw walked in a run, but the Dodgers regained the lead on a Rollins fly ball single to left. The Pirates came right back behind an Andrew McCutchen RBI double and Aramis Ramirez RBI single to take the lead. Jimmy Rollins, who had himself a hell of a game (3-4, 2B, BB, SB), then tied the score again with a double off the fence in right center. The Dodgers didn’t score again.

After Kershaw exited, Juan Nicasio stuck out two to get through the seventh, but was left in to start the eighth and gave up a single to start. Luis Avilan was then brought in and immediately surrendered a single and a walk to load the bases with nobody out. Avilan then got three straight grounders to get out of the jam without any damage being done, which could be seen as lucky, but was probably deserved for the endless string of singles against Kershaw. Jim Johnson entered next and got through the ninth, but ran into trouble in the 10th thanks to an all-around inconsistent strike zone and a lead-off walk. A single then followed, but the big mistake was not being able to field a sacrifice bunt attempt as Johnson and Alberto Callaspo couldn’t figure it out, loading the bases with nobody out. That was the end of the night for Johnson, as J.P. Howell was then brought in to try and clean up the mess. Howell proceeded to not get an out as Pedro Alvarez walked it off with a clean single down the line in right.

Amazingly, even after all that, the bullpen actually only gave up one run.

Michael Morse was victimized twice by Adrian Gonzalez at first, and he wasn’t so pleased, really.

Yasiel Puig accidentally (or was it?) told Cole to wait instead of the umpire. 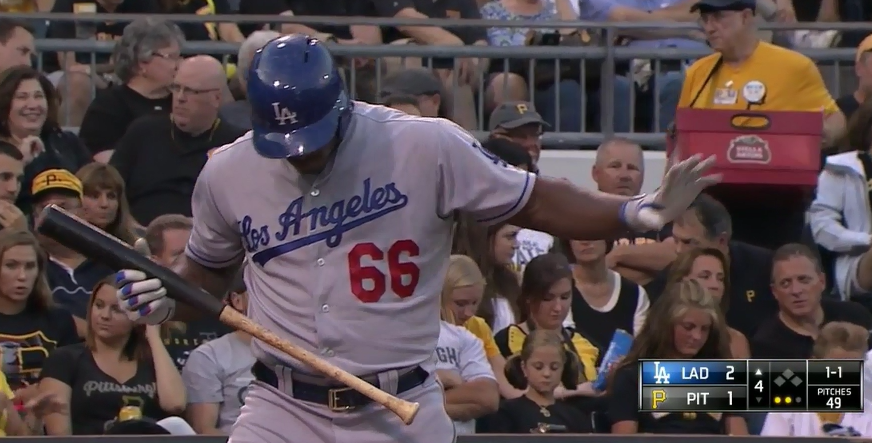