On hot days, like today, Dodger Stadium is completely different than the pitchers’ park that we’re used to. While the absence of the marine layer isn’t quite as drastic as the change at Wrigley Field based on wind direction, it’s still pretty dramatic. The Dodgers used that to their advantage today, hitting a bunch of dingers and winning by a score of 8-3.

Reds’ starter David Holmberg has had better days. He was spotted a 2-0 lead, but he was chased after just two-plus innings, allowing seven runs while striking out no batters, walking four, and allowing three home runs to Yasiel Puig, Justin Turner, and Enrique Hernandez.

Let’s talk about Hernandez’ shot for a second. Holmberg is a lefty, and Hernandez is starting to earn a reputation for crushing southpaws. Last week he also showed that he has decent raw power when he hit a ball well out to straight-away center in Pittsburgh.

Hernandez made Mike look smart after his post today by just unloading on Holmberg. Seriously, this is where it ended up. 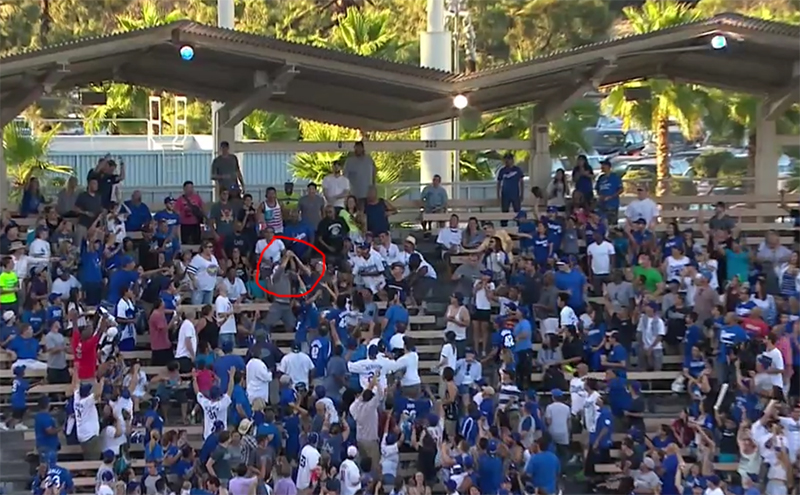 That’s almost out of the stadium. Another 15 feet or so (the home run went 436, per StatCast) and he would have had it. It would have been hilarious if he had joined the list of Willie Stargell, Mike Piazza, Mark McGwire, and Giancarlo Stanton – the players who have hit the ball over the pavilion roof. He did not, but it was still quite the shot. He came close to adding an opposite-field shot off of Jumbo Diaz in the eighth, too.

Adrian Gonzalez also added his third opposite-field homer of the year off of Reds reliever Pedro Villareal to give the Dodgers four dingers on the day. So, this screencap that Chad took yesterday? All of them hit dingers today. Decent. 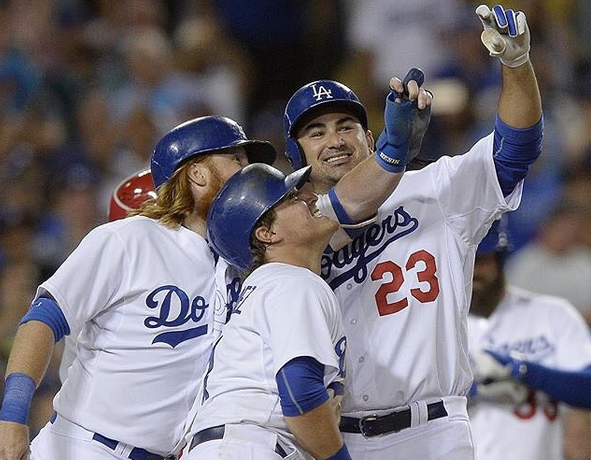 On the other side of the ball, Brett Anderson was solid if a bit underwhelming. Anderson gave up three runs in six innings, while striking out three and walking two. Two of the runs came on a Todd Frazier homer in the first. However, Anderson only allowed two other balls hit in the air (line drives or fly balls) during the entire start. One went for a double and one went for an out, so Anderson recorded 14 of 18 of his outs on the ground. After tonight, Anderson has a 66.8% ground ball rate this year. The record for a qualified starter (since tracking began in 2002) is 67.0%, set by Derek Lowe in 2006. Anderson has a chance of equaling that mark, which is pretty incredible.

It was an encouraging day all around. Yasiel Puig, in addition to the homer, had a single and a walk. Both the single and a flyout were hit with authority to right-center field, which is great. The offense has actually been “awake” for awhile now, it just seems to be more awake when the pitching staff gives up a bunch of runs. Yimi Garcia also had an outstanding turn in relief, pitching two innings while striking out one and inducing soft contact. He’s still mixing in more sliders than before he went down, which seems to be a conscious decision to keep batters more off-balance. If he’s back to his early-season form, that’s a huge addition for the Dodgers. Even Chris Hatcher had a 1-2-3 inning in his first outing since returning from the disabled list. He struck out one batter and induced two weak grounders to finish the game. One of his big issues was throwing too many fastballs, but today he mixed 4 off-speeds in with his 7 fastballs. If he can sequence his pitches better, there’s a good chance that the Dodgers’ patience could be rewarded.

The Dodgers will try to clinch a series win against the Reds tomorrow at 1:10 PDT. Zack Greinke will continue to push his Cy Young case against Anthony DeSclafini. It won’t be quite as hot, so Dodger Stadium might be back to normal.

Daniel Brim grew up in the Los Angeles area but doesn't live there anymore. He still watches the Dodgers and writes about them sometimes.
@danielbrim
Previous Reds @ Dodgers Aug. 15, 2015: Strong outing from Anderson would be nice
Next Reds @ Dodgers August 16, 2015: Lots Of Days Off Coming Up