Today was the most important game of the season to date, and the Dodgers gutted out a marathon 14-inning victory, 5-4, over the rival Giants, thus extending their divisional lead to 4.5 games. A tight, back-and-forth affair through most of the game before it hit a lull in extras, there were tons of scoring chances for both teams, and this was about as close to a playoff baseball feel one can have in August.

The Dodgers struck first in the first against Jake Peavy on a Justin Turner RBI double, which scored Jimmy Rollins, who led-off the game with a single (thus preventing another no-hitter at least). However, the Giants pulled ahead in the third against Brett Anderson with a three-run inning behind a walk, two clean singles, and two infield singles, which about sums up how the game was going for the Dodgers to that point.

Starter Brett Anderson took 87 pitches to get through five innings and generally labored. Anderson gave up three runs on six hits and a walk, but he pitched a lot better than his line. Though he didn’t miss many bats, striking out only one hitter, he had the sinker working today, generating 11 ground-ball outs and a lot of weak contact.

Fortunately, the Dodgers offense came back to get him off the hook in the sixth behind a two-run homer by Adrian Gonzalez, which scored Rollins and tied the game.

Andre Ethier then followed with a solo homer that barely cleared the fence in right to take a 4-3 lead.

Pedro Baez and Luis Avilan took over in the sixth and seventh, putting up scoreless innings out of the pen and not running into much trouble. But Juan Nicasio ran into trouble in the eighth, leading off the inning by issuing a walk. To the surprise of nobody who follows baseball, that walk was cashed in by a two-out double to tie the game at 4-4.

Kenley Jansen took over in the top of the ninth and escaped a lead-off single and steal to send the Dodgers into extra innings, which was primarily a result of the Dodgers offense completely stalling out. In the bottom of the frame, Yasmani Grandal worked a lead-off walk, Joc Pederson bunted pinch-runner Jose Peraza to second, and Peraza then stole third to setup what seemed like a trillionth scoring chance of the game. However, hot-hitting A.J. Ellis failed to make contact and there were two down.

Jim Johnson took over for Kenley in the 10th and was hardly perfect, but he went two scoreless innings in relief to give the Dodgers a shot. Chris Hatcher followed with three unbelievable innings of scoreless work to compensate for the Dodgers offense going scoreless for seven innings in a row, thanks in large part to a 1-for-14 showing with RISP before the 14th inning.

Luckily, there was a 14th inning, as an Ellis walk and back-to-back singles by Rollins and Chase Utley loaded the bases for Gonzalez. Even the Dodgers couldn’t find a way to not score in that situation, as A-God went the other way with the first pitch he saw and drove a “single” to walk it off for the Dodgers.

This was a massive win, as now the Dodgers have a 4.5-game lead with their two aces going in the final two games of the series, and the worst they’re going to come out of this is 2.5 games up.

Stressful, but worth it in the end.

Note: Good thing they ended it when they did, because we were two innings away from watching this unfold: 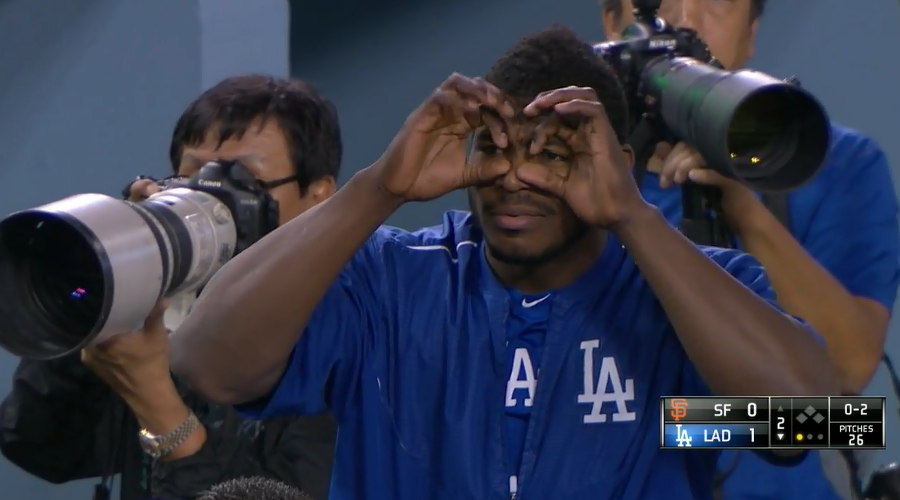 "A highly rational Internet troll." - Los Angeles Times
@ChadMoriyama
Previous Giants @ Dodgers August 31, 2015: Real Games That Matter
Next What to do with Corey Seager this month