Let’s talk about something other than The Slide. Instead, there’s other things from last night’s game worth reviewing.

Sometimes, you just have to tip your cap. In the second inning of last night’s game, Yoenis Cespedes went deep on a 2-2 fastball from Zack Greinke. This is that home run:

At the time, it was completely deflating. Since the Dodgers came back and won last night, it’s a bit easier to analyze this play for what it was: completely stunning. There are two factors which, when combined, make this play worth re-watching. First is the location: 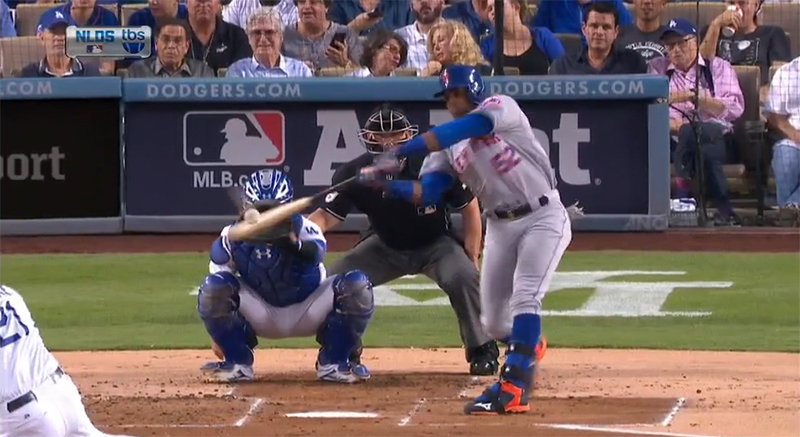 The pitch is above the belt and well outside (Larry King is unimpressed). The second impressive part of this pitch was the velocity: just a hair over 94mph. That Cespedes even hit the ball is impressive, let alone that he powered it to the opposite field for a home run.

Thanks to Baseball Savant, it’s pretty easy to dig deeper into both of these facets. Pitch FX shows this pitch as 13 inches from the center of the plate, or about 4-1/2 inches off the edge. Searching Baseball Savant’s database for similar home runs, here are the criteria I used:

Here are the results:

That’s it. He’s the only player to hit a ball in that location for a home run this year. Nobody did it last year. The last time a right-handed batter hit a ball that far off the plate, pitched that fast for a home run was Victor Martinez in the 2013 ALDS. Since Pitch FX has been tracking data in 2008, a home run hit on that kind of pitch has happened only six times. Cespedes’ homer was the second-highest pitch among that group, too. A true outlier.

Zack Greinke was probably impressed*. The pitch was probably a bit further outside than even he was intending. He’s turned to a 94+mph fastball with two strikes, more than a foot from the center of the plate 12 times this season. Eight of those pitches resulted in a ball.  Ian Desmond and Matt Duffy both fouled similar pitches off. Paul Goldschmidt swung through the pitch for a strikeout. Only Jayson Werth managed to put it in play, tapping softly into a fielder’s choice. It’s not a potent weapon in Greinke’s arsenal, but it doesn’t change the fact that nobody did any damage on it this year, until last night.

Michael Conforto‘s laser beam home run down the right field line a few batters later may be remembered as the more interesting home run of the two that Greinke allowed last night. However, let’s not forget about the Cespedes shot either. Even though he’s on the opposing side, it’s worth taking a pause to look at something amazing.

*Update: Greinke was indeed impressed, as evidenced by his post-game interview last night:

ZACK GREINKE: I felt good starting the game off and was making a lot of good pitches. Then Cespedes I thought I was still making pretty good pitches and wasn’t like not what I was trying to do, but it wasn’t perfect either. Just did a good job of hitting and got a home run out of it. Hit the ball well, and he’s dangerous.

So there’s not really anything that you can guarantee it’s going to work. I’ll take my chances in that spot. Just he did a good job on it.

The rest of us are impressed, too.

Daniel Brim grew up in the Los Angeles area but doesn't live there anymore. He still watches the Dodgers and writes about them sometimes.
@danielbrim
Previous NLDS Game 2: Dodgers 5, Mets 2: Series even after Chase Utley controversy
Next Chase Utley Suspended for Games 3 and 4