Zack Greinke and Noah Syndergaard put together a hell of a pitcher’s duel for Game 2 of the NLDS. After going down 1-0 in the NLDS with their ace on the hill yesterday, the Dodgers desperately needed to piece together a win to even the series against the Mets. While they fell behind early, they got the rally they needed for the win in the seventh inning, pushing across four runs in the inning.

Of course, all anybody will remember or talk about is Chase Utley‘s slide.

I’ll just say this up front, but as far as Utley’s slide goes, I thought it was 100% dirty. The slide was extremely late and the intent might’ve not been to injure, but everybody knows the risk of going in high with two knees like that. Ever since they outlawed the home-plate collision, I’ve always said they need to outlaw the takeout slide at second as well because it was equally pointless and dangerous. MLB has always been prone to results like this happening at second, and with the way the game is called, the only thing preventing this from happening every time out is fear of reprisal. A big enough game and a big enough situation? They’ll go for it, and of course it would be Utley doing it.

And that’s the whole problem, really. Slides like this happen frequently and nobody cares unless somebody gets seriously hurt. Hell, people didn’t care when Jung Ho Kang DID get seriously hurt or when Matt Holliday tried to check Marco Scutaro into last century in the playoffs a few years back. The Mets have likely done it, the Dodgers have likely done it, and it happens because the MLB hasn’t made slides like Utley’s illegal and they need to, preferably immediately.

MLB Spokesperson: Umps did not feel it was illegal slide. They could have called it. During that review process, illegal slide not reviewed

Again, the MLB is reaping what they sow here by continually backing garbage like this. Dodger fans should not bother fighting anybody who calls out Utley for this because he was clearly in the wrong, and this type of play is horseshit that doesn’t need to be a part of baseball.

In my timeline, though, there’s a lot of talk about the Mets being screwed, which is the part I take issue with. The replay review and the subsequent rulings were all correct. It was not a neighborhood play because the throw took Ruben Tejada off the bag and no throw attempt was made to first. 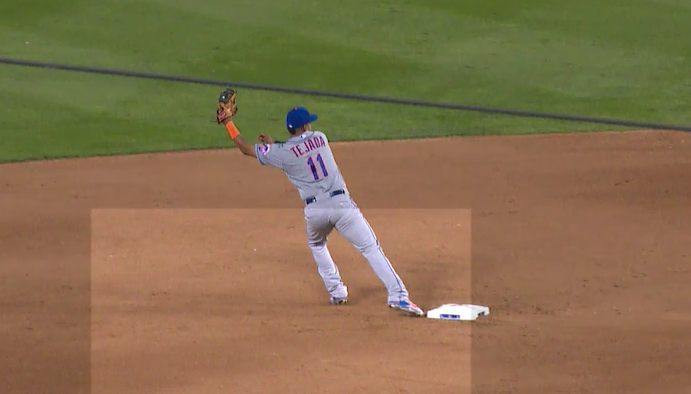 This happened to the Dodgers twice this season in one series.

People in my TL are saying they never saw the neighboorhood play called like this, but it happened to the Dodgers twice.

It was not an illegal slide because, like I said, the MLB has endorsed bullshit like this for decades now.

And it didn’t matter that Utley missed the bag either.

"Tejada didn't touch the bag, and Utley never touched second base. The fact he was called out, meant he's not required to." – Torre

Thus, I don’t see what exactly the Mets got “screwed” on.

To me, Utley can understandably be vilified. I’ve said the same about many other takeout slides, and the same applies here, but the Dodgers did win the game by the rules, even if I disagree with whether the rule that led to Utley’s terrible slide should be continually justified to begin with.

Joe Torre on slide. “It certainly was late. That concerns me. The lateness of the slide.”

Honestly? All that said, I think it would be a joke for Joe Torre to take action against Utley after they have let shit like this slide for years now. Similar slides have happened in this playoffs and nobody has been suspended for that because fortunately none of them resulted in injuries, but to take action now over this would be enforcing a result and not the action they’ve continually looked the other way from.

What Torre should do is make sure the rules are changed for 2016, like they should’ve been years ago, and then enforce it from there, not unlike what happened with Buster Posey.

With that out of the way, to the recap.

Greinke and Syndergaard both put up a zero in the first. Greinke allowed a single but faced the minimum thanks to the double play, and Syndergaard came out sitting 99-101 mph and struck out two. Thor looking like that didn’t inspire much confidence going forward, but one did have to wonder how much longer he could sustain that velocity.

The second inning proved to be the problem spot for Greinke, as he allowed homers to Yoenis Cespedes and Michael Conforto to put the Mets up 2-0. Cespedes’s homer was on a ball off the plate away that he muscled out to right, while Conforto drilled a pitch off the right field foul pole after Greinke missed middle-middle. Syndergaard then posted one of those much hyped “shutdown innings” that TBS loves to talk about in the bottom of the frame.

In the third and fourth, Grienke kept the damage to the two previously allowed runs, allowing only a hit while striking out two batters. Syndergaard struck out the side in the third, but gave up two hits and started to show signs of wearing down a bit after his velocity dipped into the mid-90s range rather than triple digits. Sure enough, the Dodgers broke through in the fourth after back-to-back doubles by Justin Turner and Andre Ethier cut the lead in half, 2-1.

However, after Carl Crawford grounded back to the pitcher, Ethier did his best 2014 NLDS Game 4 impersonation on the bases and got thrown out at third, basically killing the rally. Syndergaard escaped trouble, which appeared to be important as it seemed like he was laboring at that point.

Syndergaard cruised through the fifth and sixth innings, allowing only a walk that was erased on a double play, but ran into trouble in the seventh. After striking out Yasmani Grandal, he walked Enrique Hernandez, who stole second. Pinch-hitter Utley then blooped a single to right to move Hernandez to third, and that ended Syndergaard’s night.

That’s when the Utley play happened, as recapped above, and that tied the game at 2-2. Corey Seager then flew out to left, but Adrian Gonzalez doubled to drive in Utley and Howie Kendrick, giving the Dodgers a 4-2 lead.

Justin Turner then followed with a double of his own, making the score 5-2.

It’s nice when that happens, huh?

This series now heads to New York on Monday tied 1-1, and given the events of this game, boy is that atmosphere gonna be loud and hostile for starting pitcher Brett Anderson.