Dodgers should stay away from Jordan Zimmermann in free agency

On the surface, Jordan Zimmermann looks like a really attractive free agent — someone the Dodgers would absolutely be interested in. But if you dig beyond the surface, you’ll find that it’s much more complicated than that.

Why are we talking about Zimmermann? Well, a baseball writer who is almost always wrong tweeted out a thing on Friday night … that he’s sure to be wrong about.

The #Dodgers, in their quest for marquee starting pitching, have identified free agent Jordan Zimmermann as one of their top targets.

The #Dodgers still in on Greinke, of course, but they like Jordan Zimmermann an awful lot as well

Zimmermann, 29, has been really good for the Nationals since becoming a mainstay in their rotation in 2011. He has averaged 194 innings, a 3.14 ERA, 3.30 FIP and a sparkling 1.7 BB/9 rate in the last five seasons. His strikeout rate was an acceptable(ish) 7.3 per nine innings and is tied for 12th in WAR among all pitchers (18.6), ahead of the likes of Gio Gonzalez, James Shields and Johnny Cueto. He has been pretty consistent, and that’s something the Dodgers could use out of a free-agent signing.

He has already had Tommy John surgery (August 2009), so he should be good to go, right? Not so fast.

Dave Cameron at FanGraphs identified Zimmermann as one of his five free agent landmines.

“Without home run suppression, Zimmermann is merely an above average starter headed into his 30s, with an already-repaired UCL that has five years of wear on it. Given that some data shows that the repaired ligaments have a shelf life of roughly five years, there’s some significant injury risk in play as well. At $120 to $140 million, Zimmermann would need to start out at around a +4.0 WAR level and stay healthy for the duration of his contract to return value for the signing team. A year ago, that might have been a solid bet, but coming off a bit of a down year — by his lofty standards — I’d be wary of going too far north of $100 million for his services. As noted in the bargains post, if the goal is to add a strike-thrower with an average strikeout rate, just sign Wei-Yin Chen for half the price instead. “

The part about the repaired ligament gives me a lot of pause. While he isn’t 100 percent sure to re-injure it, the odds don’t especially seem to be in his favor.

Doug Thorburn is a writer at Baseball Prospectus and co-authored the book, Arm Action Arm Path & The Perfect Pitch, so it’s safe to say he knows what he’s talking about in regards to pitching. He had this to say about Zimmermann and elbow drag on the April 2 edition of Effectively Wild podcast in which a “No Tommy John Draft” was held. It was an exercise in choosing pitchers least likely to need Tommy John surgery in the next few years.

“He gets some of the highest grades in all of baseball. I love his delivery when I look at the grades on the report card, but there’s a reason why he’s had Tommy John in the past. The guy has elbow drag on almost every pitch. On top of that, he throws really hard and with velocity, that is something that I noticed. (sic) If a guy throws really hard and has elbow drag, I won’t be touching him.”

Elbow drag is something Thorburn found in his research when it came to pitchers needing Tommy John.

“Typically, guys who are big on torque — usually upper-body — or who have a pronounced delay after foot strike … I often refer to it as the ‘double-edged sword.’ Because by having a bigger delay, they allow their hips to open up so they increase hip-shoulder separation, but the big issue is sometimes the arm is so late that they end up experiencing elbow drag. In general, they want to have more of a delay; a longer delay, but they get too far and that’s when they can be in that injury risk zone.”

Yikes. If you weren’t convinced before, you might be now.

It isn’t all bad with Zimmermann. His delivery is efficient and excellent.

“The Nats’ right-hander was in the running for virtually every mechanical category under the microscope, and he is on the short list for most efficient delivery in baseball. He earns plus marks in every subject, including those that were not covered in this series, such as release distance (65-grade) and repetition (an insane 80 grade). He has the best momentum in the division, a balance score that is just as impressive (especially when the two marks are considered together), big torque and solid posture.”

Still, it’s hard to get beyond the elbow concerns. He might not be worth the $120-plus million investment.

Zimmermann has a 4-pitch mix — a fastball, slider, curveball and changeup. Although, it’s probably best to call it a 3-pitch mix as he all but abandoned his changeup in 2015. His velocity has been fine during his career. It hasn’t really fluctuated much. He has generally be in the 92-94 MPH range on his fastball. His curveball has seen the slightest tick upward in the last two seasons, but everything else is pretty consistent.

Somethings of concern include the usage of his pitches and the whiff rates associated with them. 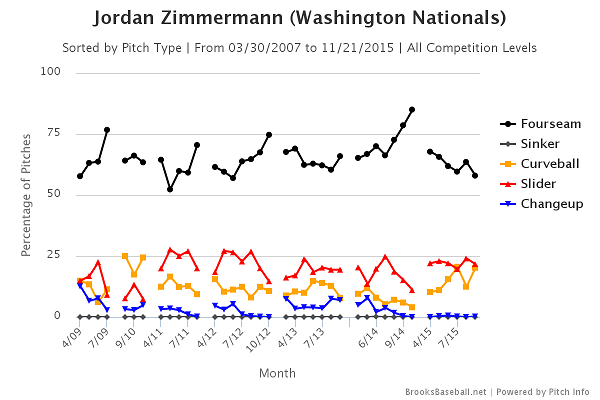 As you can see, Zimmermann has seen his fastball usage trend down and his curveball usage trend up. His slider has remained consistent and is his best pitch. FanGraphs valued his slider at 11.3 runs above average and his curveball at 5.3 RAA in 2015. His fastball was a -10.6 RAA — 34th-worst among qualified starters. It could be an anomaly, as the previous four seasons have seen pitch valued at 6.3, 9.6, 6.3 and 14.6.

The career-worst mark for his fastball could be attributed to his lack of swings-and-misses on the pitch. 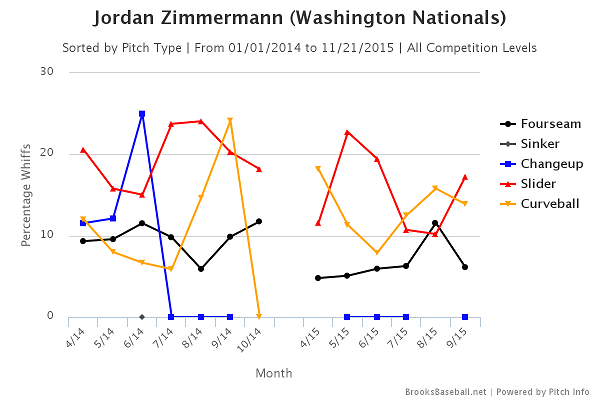 He had a 6.9 percent whiff rate on his fastball in 2015. That was the lowest mark since his 4.7 percent rate in 2010, when he pitched just seven games. His slider and curveball are his out pitches. With the extra strain breaking balls put on the elbow, as well as everything outlined above, it doesn’t bode well for his future if he’s going to resort to throwing more breaking pitches than fastballs. There are exceptions to the rule and these rules are anything but iron clad, but it’s still a significant risk.

Given the fact Zimmermann would cost the Dodgers their first-round draft pick — something the front office values immensely — I doubt they sacrifice the pick to sign a non-elite guy like him.

Dustin Nosler began writing about the Dodgers in July 2009 at his blog, Feelin' Kinda Blue. He co-hosted a weekly podcast with Jared Massey called Dugout Blues. He was a contributor/editor at The Hardball Times and True Blue LA. He graduated from California State University, Sacramento, with his bachelor’s degree in journalism and a minor in digital media. While at CSUS, he worked for the student-run newspaper The State Hornet for three years, culminating with a 1-year term as editor-in-chief. He resides in Stockton, Calif.
@DustinNosler
Previous Report: Dodgers to name Dave Roberts manager
Next So, What Next?