Yimi Garcia is an extremely interesting pitcher. As a result, we write about him a lot. Early last year, he looked like one of the very best relievers in baseball. He has the highest spin rate on his fastball (despite having below-average fastball movement). As the bullpen is currently constructed, he will be slotted in as a high-leverage reliever, as well he should be. However, it’s worth noting how quietly weird the end of Garcia’s 2015 season became, and its potential ramifications on the future.

This post focuses mostly on the negatives of Garcia’s late season, but let’s begin with a very impressive positive development. Between June 7th and October 4th, Garcia faced 136 batters without allowing a walk (he finally walked Derek Norris in his final outing of the regular season). While Garcia’s control won’t be quite that good going forward, it’s hard to argue with his 4.4% walk rate throughout the course of last season. If Garcia is to be an effective member of the bullpen in the upcoming season, this control will have to continue.

However, when looking for optimism in the tiny walk rate, there are some pretty major red flags that come up too. Just look at this breakdown of Garcia’s early and late-season results:

The most notable issue is alarming: the precipitous drop in strikeout rate. Unfortunately, finding the root cause is pretty tricky. Here is a partial (yet not complete) list of things that did not change significantly between the beginning of Garcia’s season and the end:

Overall, there have been three differences worth noting. The first is the horizontal release point: 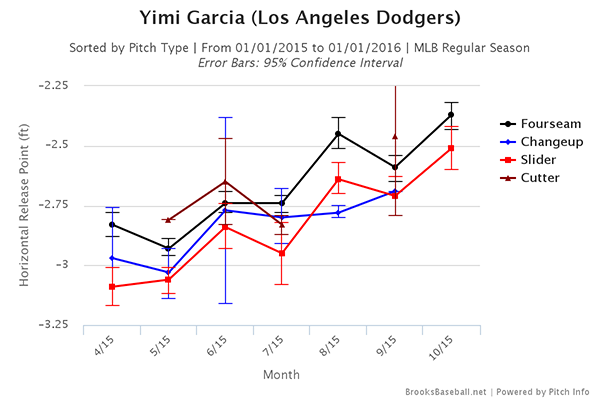 It looks like a major trend, but the scale needs to be noted. Between June and August, Garcia shifted on the mound by 3-4 inches. It’s something, but it’s not a smoking gun that causes such a huge change in results.

The second change was a big shift in pitch usage: 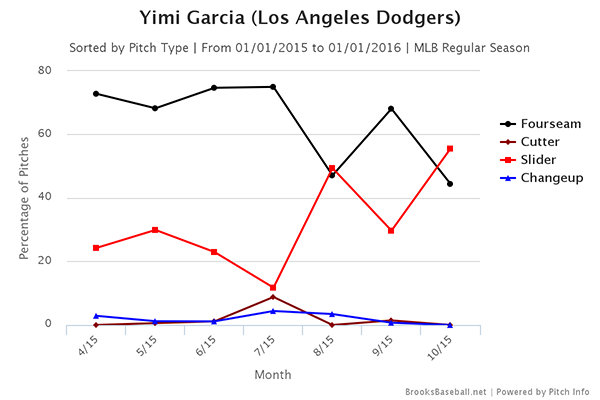 During Garcia’s dominant early-season run, he was throwing almost entirely fastballs. After returning from the minors, he mixed in a lot more sliders.

Garcia’s fastball got way fewer whiffs in the closing months of the season, but his slider did the opposite. Garcia responded by throwing the slider more, which makes sense. However, the pitch result breakdown (above) is important. On average, the league swings and misses at about 8.5% of fastballs thrown. Garcia’s swinging strike rate on the pitch early in the year would have been second in the league, ahead of Aroldis Chapman but behind Darren O’Day. Even Garcia’s late-season rate could be considered elite; it would be 18th in the same 389 pitcher sample group (incidentally, one spot above Pedro Baez).

Even though Garcia’s slider improved significantly, it still was not a good pitch late in the year. On average, batters swing and miss at about 17% of all sliders. Garcia’s 10.16% rate at the beginning of the season was, frankly speaking, miserable. It would have been 11th-worst among the 166 pitchers who threw the pitch at least 200 times last year. The late-season improvement is somewhat encouraging, but it still places the pitch in the bottom quartile for whiffs generated.

The bottom line is that Garcia replaced a very good pitch with a not very good pitch. He probably needed to do that to prevent himself from being too predictable going forward, but it’s hard to escape that reality.

This brings us to the third change that happened late in the season, swing rate: 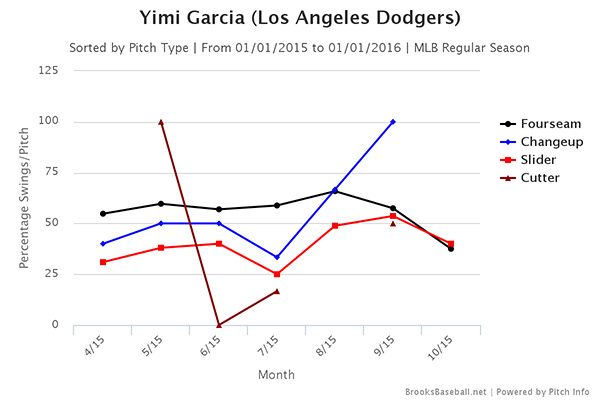 That doesn’t sound like much, but it is an adjustment, and it explains a lot. Batters still have trouble finding the fastball, but they’re not letting Garcia get as deep into counts. That explains the walks disappearing. It also explains why Garcia’s strikeout rate fell to much less than what his swinging strike rate would normally predict (closer to 25%).

It’s also easy to intuit why this happened. Garcia, at his core, is a very predictable pitcher with only one good pitch. If batters know the fastball is coming (and it probably is), they can sit on it. That it might be easily distinguishable from his slider doesn’t help. Garcia tried to counter-adjust by mixing more sliders in, but in doing so he had to go to a more mediocre pitch. Garcia doesn’t have more tools to work with, which is why this small sample is worth worrying about.

This concern is also compounded by Garcia’s other rough edges. The fastball is somewhere between good and elite, but if the strikeouts continue to fall, then his batted ball profile will be more of an issue. Garcia allowed twice as many fly balls as grounders last year, leading to the second-lowest GB:FB ratio in the league. This can work well for a pitcher who strikes out a lot of batters and gets a lot of pop-ups (Tyler Clippard‘s peak years come to mind) but Garcia hasn’t necessarily shown that he can dependably do that yet. The longball will always be a worry, and Garcia’s eight homers allowed in 2015 didn’t feel out of line with his pitching style. If the strikeouts don’t rebound, more balls will be put in play against him and more will go over the fence.

Garcia’s 2016 season isn’t all doom and gloom. He flashed the ability to be an elite reliever, and it’s not like that went away entirely. His 2015 season as a whole is likely more predictive of his success than the final 18 innings of that stint or the first 36 on their own. However,that ending took him from being an incredibly bright spot in the future of the bullpen to something of a question mark. The Dodgers have bullpen depth, but they’ll need either Garcia or Pedro Baez to take the next step in order to match up with the league’s elite staffs.

Daniel Brim grew up in the Los Angeles area but doesn't live there anymore. He still watches the Dodgers and writes about them sometimes.
@danielbrim
Previous How Do You Feel About the Alex Wood / Hector Olivera Trade Today?
Next 2016 Dodgers Top 100 Prospects: No. 40-31