Kenta Maeda‘s Dodgers debut went about as swimmingly as he could’ve dreamed, as he twirled six shutout frames and contributed a homer, leading the Dodgers to a 7-0 win and a sweep of the Padres.

As noted by Eric Stephen prior to the game, Maeda not allowing a run in his start means the Dodgers are the first team with their first three starting pitchers to allow no runs to start a season since the Braves rotation in 1994.

Offensively, Chase Utley led off the game by seeing six pitches and driving the last pitch into the right-center field gap for a triple. Justin Turner then drove Utley in on a single to right field to get the Dodgers on the board first, 1-0. Adrian Gonzalez followed with a walk to put runners on first and second, and a Carl Crawford poked a double past the third baseman down the line to score Turner. Joc Pederson then brought both A-Gon and Crawford home with a single up the middle to leave the Dodgers advantage at 4-0 after the top of the first.

The highlight of the game came in the top of the fifth, however, when Babe Ruth impersonator Maeda crushed a hanging curve into the left field seats to make it 5-0. 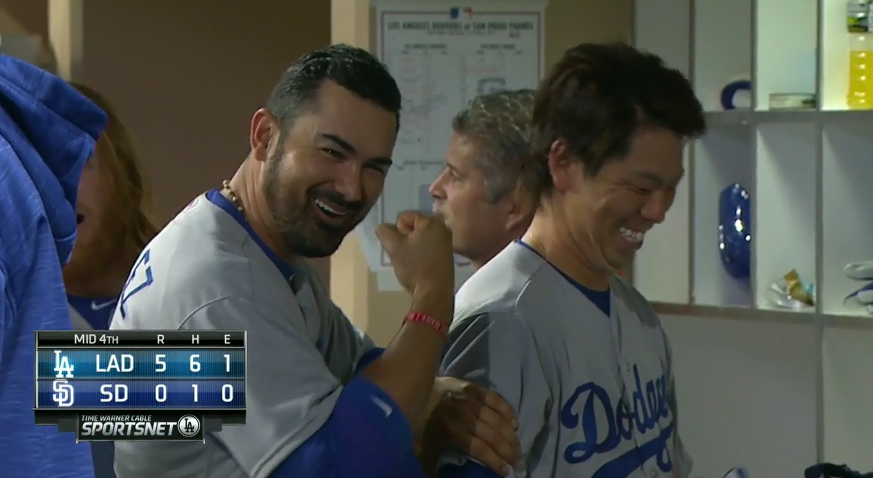 For the second home run of the season, the Dodgers only had to wait until the eighth inning, when Yasiel Puig somehow pulled a curve on the outer half of the plate over the left field wall to make it 6-0.

Some guy named Mike Petriello pointed out Puig is killing the ball.

The Dodgers tacked on another run in the ninth after back-to-back singles by Enrique Hernandez and Corey Seager put runners on the corners. Turner then hit a fly ball to right for a sacrifice fly to make the game 7-0, which was almost mercifully where the run scoring stopped.

Of course, I still haven’t talked about the pitching side of things, because thankfully there wasn’t much to recap. Maeda had a stellar debut, allowing only five baserunners over six innings on 84 pitches. He wiggled out of trouble when necessary, prevented issuing free passes, and struck out four batters.

In particular, the slider was quite impressive.

This is fun, huh?

Dodgers giving high fives to Maeda’s translator after he did his job on a mound visit? Yup. 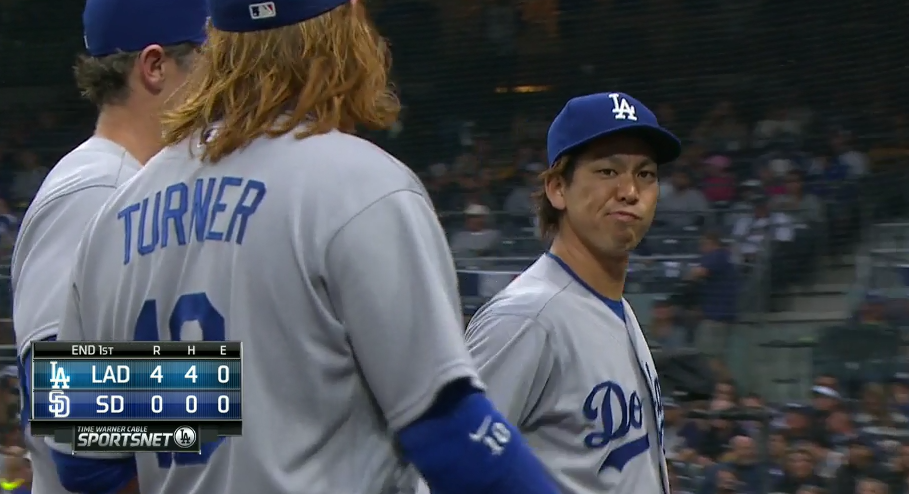 Well guys, that was fun, but it can only get worse from here!