The Dodgers beat the Diamondbacks 5-2 tonight to take the series win, but of course it didn’t come as easy as the scoreline would indicate. The Dodgers looked completely lifeless on offense for six innings, but trailing 2-0, they rallied for five runs in the seventh and the bullpen had a flawless showing.

Ross Stripling was never going to be able to top his major-league debut, in which he walked four and gave up just a run in 7.1 innings while surrendering no hits. But boy, he his best to earn his first career win, pitching six innings of two-run ball, allowing five hits and just a single walk while striking out five. Stripling probably won’t always be on his game like he is now, but there’s little in what he’s shown so far that indicates he’s a fluke. His velocity is consistently 91-93 mph and he effectively uses his off-speed mix of a change, 12-6 curve, and slider to keep hitters off balance.

Stripling managed to get the no-hitter drama out of the way early by allowing the first hit of his MLB career to lead-off the game. But he quickly erased that on a double play before managing to get out of the first unscathed. Over the next three innings, Ross allowed only a walk and a double, keeping the game scoreless. Of course, the game was only scoreless because D-Backs starter Robbie Ray kept the Dodgers bats quiet by scattering three walks and two singles over his first four innings of work.

The Dodgers and Stripling ran into trouble in the fifth and sixth innings, however. A one-out double by Chris Herrmann was cashed in by a two-out single by Nick Ahmed, which also happened to provide the first hit with a runner in scoring position all series along. That put the D-Backs up 1-0, and they tacked onto the lead in the sixth. After a lead-off single by Socrates Brito, he promptly stole second and eventually scored on a ground out from David Peralta to give the D-Backs a 2-0 lead.

The Dodgers offense attempted a rally in the fifth inning, putting two runners on base via a walk and single, but that attempt too failed. The Dodgers then went down in order in the sixth, but came back in the seventh with a rally to finally knock Ray out of the game.

A single from Trayce Thompson and a one-out walk from Austin Barnes put runners on first and second, and the D-Backs brought in Randall Delgado to face pinch hitter Justin Turner. Turner delivered with the Dodgers first hit with RISP of the whole damn series to cut the lead in half and make it 2-1. Enrique Hernandez then followed with the finisher: a two-run double to left that gave the Dodgers the lead at 3-2.

The D-Backs then summoned Andrew Chafin from the bullpen to face Yasiel Puig, who after two massive swings for the downs, went the other way against the shift for a single to double the lead at 4-2. Adrian Gonzalez then singled to right as well on a soft grounder with eyes and the Dodgers suddenly had a three-run lead at 5-2 after a five-run seventh inning explosion.

The Dodgers bats were quiet the rest of the game, but additional scoring turned out to not be necessary. J.P. Howell, who entered the game with a 54.00 ERA and having not recorded an out in his last two outings, bounced back in relief of Stripling with a scoreless inning that included two strikeouts and a ground out. More importantly than just the results, Howell was back to sitting 87 mph instead of 84-85, and the slider looked a lot sharper than it did before.

Yimi Garcia then entered to take care of the eighth inning, and while he allowed a sharp single to Brito on a 1-2 count, he came right back to dispatch of Paul Goldschmidt on four pitches to end any threat. Speaking of ending threats, there was none in the final frame, because Kenley Jansen set the side down in order despite slacking and only picking up one strikeout.

Of course, there’s reasonable debate over whether it was necessary to use Jansen with a three-run lead the day after he just recorded his first five-out save ever, and while I actually do agree that logic makes sense, I find it hard to fault Dave Roberts for just going the safe route for now with Clayton Kershaw on the bump tomorrow.

-For all the hand-wringing about the Giants series, I thought the Dodgers played better as a team in that series than they did in this one, despite the series win.

–Vin Scully talks about the number 13. 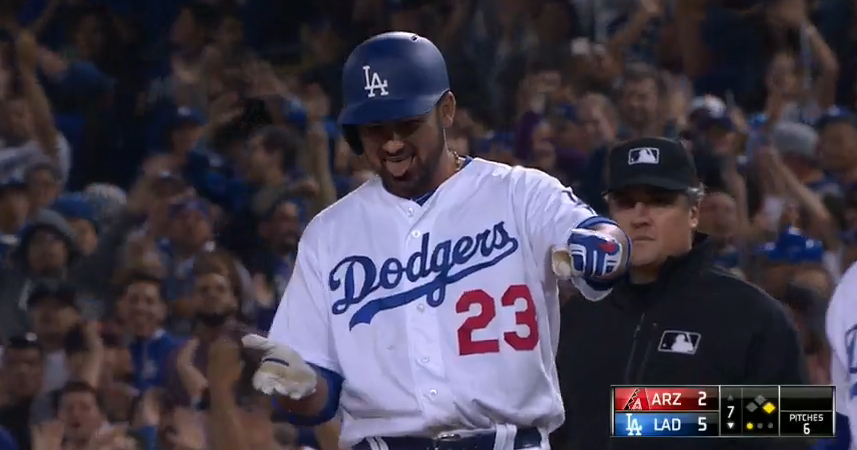