After yesterday’s win, everything seemed to be going the Dodgers way again, but because baseball is baseball of course a dose of misery had to hit immediately after. While the Dodgers mounted a valiant comeback attempt in the later innings against the Giants today, they fell just short after trailing early and never recovering in a 4-3 loss.

The good news? Dodgers starter Scott Kazmir was regularly 92-94 mph, and given his previously lower velocity, that was a positive sign that things were probably fine with his arm and arm strength. The bad news? Everything else. Kazmir again struggled against the Giants lineup, laboring through 93 pitches in his four-plus innings of work. He struck out three but surrendered seven hits and four walks, the latter number explaining why he was struggling more than anything else.

Inevitably, people will focus on Kazmir’s performance because he was given the label as Zack Greinke‘s rotation replacement, but Johnny Cueto shutting the lineup down was as much reason for the loss. Cueto carried a perfect game into the fifth inning before surrendering a double to Yasmani Grandal, and he didn’t give up much more than that afterward. He encountered a bit of a struggle in the seventh inning, when he surrendered a run on an Enrique Hernandez single to right, but otherwise he allowed just three hits and two walks while striking out seven in his 7.1 innings of work.

Going back to the Dodgers side of things, the damage against Kazmir could’ve been worse if it wasn’t for Adam Liberatore, who entered with the bases loaded and nobody out in the fifth, got a double play, and struck out a batter to escape the jam with only a single run charged to Kazmir. Liberatore proceeded to set the order down in order the next inning to provide two quality frames.

Yimi Garcia followed Liberatore out of the pen, and he also kept the Giants at bay, allowing only one baserunner in the form of a Hunter Pence hit-by-pitch. That moment provided perhaps the most excitement of the game to that point, as Pence was none too pleased and Yimi basically didn’t give a shit. Anyway, J.P. Howell then entered to get the following inning, and he did just that despite giving up a single to Cueto.

That bullpen performance allowed the Dodgers the chance to get back in it, and in the eighth inning they scrapped back a couple across the plate. Lefty specialist Javier Lopez walked A.J. Ellis, who was pinch-hitting for lefty Chase Utley, which setup Corey Seager‘s eight-pitch battle resulting in a homer to straight-away center on a 3-2 sinker.

That cut the lead to 4-3, and the Dodgers had a quality shot to tie the game in the bottom of the ninth, after Pedro Baez worked around a lead-off walk to post a scoreless frame in the top of the inning.

Grandal led off against Giants closer Santiago Casilla with a double to right-center, giving the Dodgers a chance to tie it. For whatever reason, though, on the first two pitches of his at-bat, Dave Roberts had Enrique try to bunt. 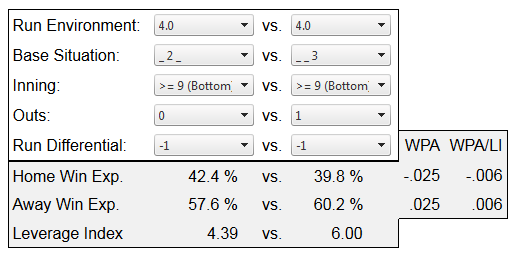 So even free of context in terms of Enrique being one of the better hitters on the team so far and that Joc Pederson is one of the most strikeout-prone players on the Dodgers, just thinking about this made no sense. Thankfully, the bunt sign came off when it was 1-1, but Enrique grounded out and ended up only moving the runner anyway. Who knows how that plate appearance turns out if he’s allowed to turn it loose from the first pitch, but Enrique was never given that chance.

Speaking of Joc, it was his at-bat that was key to the comeback failure, as his meek pop out into foul territory was the killer blow. 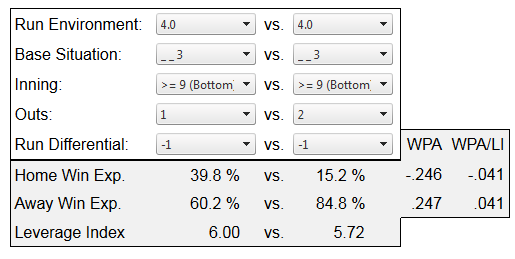 Yasiel Puig then pinch-hit for Trayce Thompson to give it one last shot, and Puig squared up a fastball middle-in. Unfortunately, he got under it too much and hit it a mile high into left for the out and the end of the game.

A loss is a loss, but I do wish the Dodgers could make them less depressing ones against the Giants.

The only joy is this Clayton Kershaw gif.