The Dodgers beat the Mets tonight, 3-2, in dramatic fashion thanks to a whole bunch of offensive struggles, quality efforts from the pitching staff, and Trayce Thompson walking us off with a dinger.

Like yesterday, the first batter of the game provided a lot of entertainment, though thankfully it wasn’t a Mets hitter dingering off a Dodgers starter. Rather it was Yasiel Puig again coming up with a sterling defensive play to rob Juan Lagares.

That play was in support of Alex Wood, who generally pitched excellent tonight, though he did run into one trouble inning in the second. Wood allowed back-to-back singles to start the frame, and then was victimized by an errant Chase Utley throw on a grounder to second by Michael Conforto, which allowed a run to score and put runners on the corners with nobody out. Kevin Plawecki immediately followed with a single to score another run and keep the rally going. Fortunately, Wood buckled down after that, retiring the next three batters without allowing the runners on first and second to move.

That was about it for the Mets against Wood, who threw 102 pitches in his 6.1 innings. He allowed just four hits and two walks, along with the aforementioned two runs (only one earned), and struck out nine in a surprisingly dominant performance. Wood’s ERA is down to a mediocre 4.58, but if he pitches to his current 3.73 FIP or 3.56 xFIP, I think everybody would take that.

Offensively, the Dodgers got things off to a flying start against Mets starter Jacob deGrom. Utley led-off the first with a double to left center, and Corey Seager promptly followed with a double of his own to score Utley and get the Dodgers on the board. Justin Turner moved the runner on a ground out up the middle, and Seager was brought home on a sacrifice fly to left by Adrian Gonzalez. Unfortunately, for the most part, that was where the fun stopped. The Dodgers mounted rallies in the second, third and eighth inning, but couldn’t score, mainly due to a 2-for-10 performance with runners in scoring position and deep fly balls from Puig and A-Gon that would’ve been homers on any other night but tonight.

Fortunately, then the bullpen turned in a quality performance, with Louis Coleman, Pedro Baez, and Kenley Jansen combining for 2.2 scoreless innings.

And that was enough to setup Thompson for the walk-off dinger.

The Dodgers play the Mets again tomorrow at 7:10 PM PST/10:10 PM EST, with the pitching matchup being Kenta Maeda against Noah Syndergaard.

Should be a doozy.

-A-Gon trolling Juan Lagares into getting caught off first.

-Puig getting his ‘The Godfather‘ kiss in on Trayce. 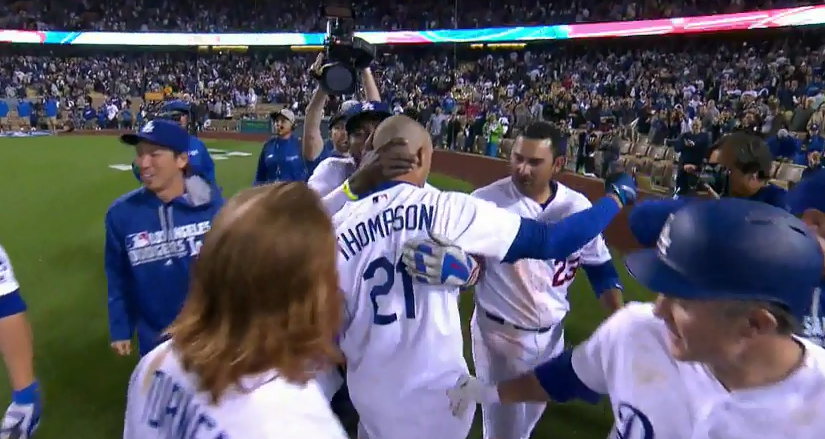