The Dodgers have now won three in a row while securing a series win no matter what happens tomorrow, and have won the first two games of a series for just the second time all season. The win moves the Dodgers to 20-17 on the season and closer to .500 at home at 9-10.

Any discussion about today’s game has to start with Kazmir and his dominance. As I already mentioned, it was unlikely that a struggling pitcher would shutdown one of the best offenses in the league, but that’s exactly what happened. Kazmir twirled a gem, going 8.2 innings on 120 pitches and allowing three runs, but just two earned runs when he gave up a two-run homer late in the game to Jeremy Hazelbaker. Still, he limited the Cards to five hits and a walk, and he struck out seven.

Despite being victimized by the defense for a run, he also did get some help from the likes of Yasiel Puig.

But most of the stellar performance was of Kazmir’s own doing, as he seemed to have command of all of his pitches for once. Perhaps more incredibly, for a guy who brought out the concerns of scouts for throwing mid-80s in Spring Training (cutters, he says), he was throwing as high as 95 mph today and as late as the eighth inning.

It’s a good thing he was on, because the Dodgers offense was limited to six hits and three walks on the night, and it always figured to be a struggle against Carlos Martinez.

…and a three-run fifth inning really helped add distance. Martinez struggled in the inning, walking Carl Crawford, sorta misplaying a bunt from Kazmir into a single, and then walking Utley to load the bases.

That brought up Corey Seager, who made two errors and cost Kazmir the unearned run, and he singled to right field for the second run.

That left the bases still loaded and the Dodgers didn’t get another hit in the inning, but they managed to push two more runs across on a Justin Turner sacrifice fly and an A-Gon grounder.

Seager continued his redemption from struggles on the field in the seventh when he deposited a homer for the fifth run.

Of course, after Kazmir gave up that two-run homer in the ninth, the Dodgers needed all the insurance they got, and Kenley Jansen was forced into work for the second-straight night. Jansen recorded a strikeout on three pitches to get the save, meaning that although he’s worked in back-to-back games for saves, he’s only thrown seven pitches.

This is a conspiracy, IMO.

This is all a conspiracy by Kenley to get like 80 saves this year.

The Dodgers try to complete a series sweep of the Cardinals tomorrow night at 5:00 PST/8:00 EST on ESPN. The pitching matchup will be lefty Alex Wood against righty Mike Leake.

-Corey is not impressed. 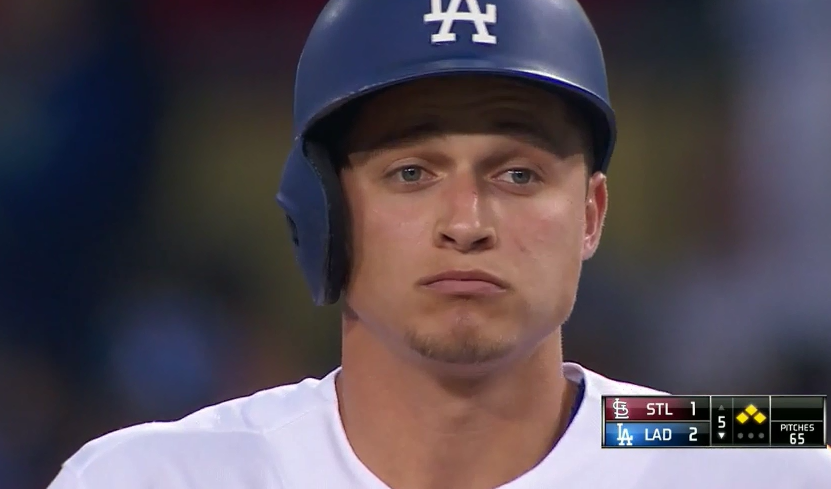 -What was that, Joc Pederson?

After this at bat at the beach @redturn2 is ready for the game tonight #PuigNoPitch pic.twitter.com/5IFRvIm771