What was supposed to be a rematch of Noah Syndergaard and Kenta Maeda from earlier in the season quickly turned into something else entirely, as the Mets finally tried to get revenge on Chase Utley. That attempt, however, didn’t exactly go as planned since Utley burned the Mets over and over tonight in an 9-1 win for the Dodgers.

The story of the game basically happened early, as Syndergaard was cruising through 2.1 innings when Utley came up. For whatever reason, Thor decided this would be a good time to send a message and pretty clearly intentionally threw a fastball behind Utley and was immediately ejected by the home plate umpire for his trouble.

I mean I guess technically that was 100% on purpose or whatever, but I've never seen that for not even hitting the guy.

Utley is a sociopath cause he got 100 mph thrown behind him and he immediately started prepping the box for the next pitch like whatever.

I guess that was meant to send a message to Utley and/or the Dodgers, but it certainly ended up being a boon for both the intended victims instead. Thor looked on point early and to get him out of the game was an obvious win, and what was even better is that it just seemed to piss Utley off.

That said, it did take until the sixth for the Dodgers to get to the relief corps, but boy did the floodgates open after that. Utley (of course) led off the frame with a homer to deep right-center on the first pitch to give the Dodgers a lead.

The crowd was chanting "Hit him! Hit him!" And then Chase Utley hit a home run. 1-0, Dodgers.

Later in the inning, Adrian Gonzalez drilled a double with two outs and Yasiel Puig cashed him in with a clean single to left, giving the Dodgers a 2-0 lead.

Following up on that inning, the Dodgers blew the gates off in the seventh. Joc Pederson led off with a double, Howie Kendrick then singled, and Yasmani Grandal walked to load the bases. Struggling Enrique Hernandez struck out, but Utley (seriously) picked everybody else up by drilling another homer to right-center field.

Speaking of trolling, here's Robles pointing the ball out for his infielders for the pop-up. pic.twitter.com/vHPe089xPl

The most amazing trolling in the history of trolling. 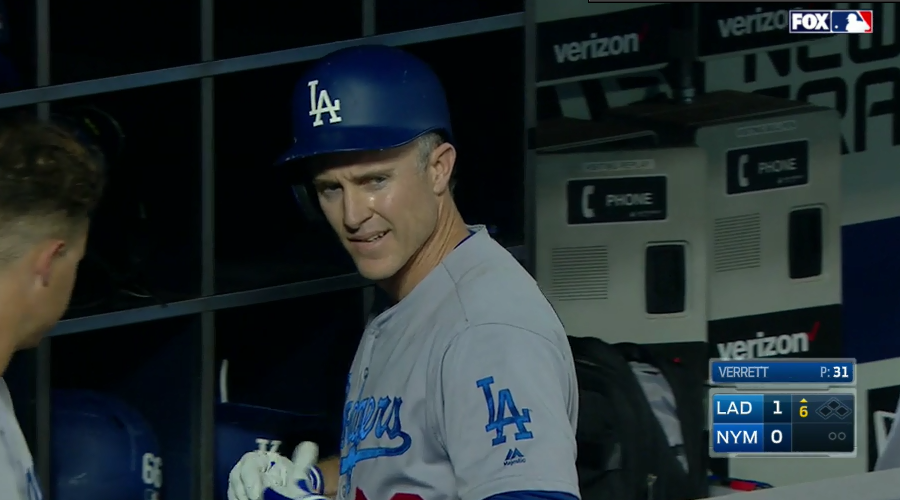 For insurance runs, the Dodgers added three solo homers in the eighth and ninth innings, with A-Gon, Howie, and Corey Seager all going deep, which completed a day in which the offense had three walks and 14 hits, including three doubles and five homers.

So that’s was a nice change of pace from the offense doing things as usual, but the game was only a blowout because King Kenta went five shutout innings, allowing only two hits and two walks while striking out three. All that despite getting injured on the third batter of the game after being hit hard on the pitching hand by a liner hit back up the middle by Michael Conforto. Understandably, he was removed after just 75 pitches, probably due to precaution more than anything, but he more than did his job considering the disaster it could’ve been.

The bullpen getting the final four innings could’ve gone real bad, but they did their job admirably. Adam Liberatore and Chris Hatcher pitched scoreless sixth and seventh innings, and while J.P. Howell did give up a solo shot in the eighth, he made it through without any further damage.

The newest addition to the team, recently claimed and recently called up reliever Casey Fien, was extremely impressive to finish off the game. Fien struck out the side, which is whatever in a low leverage situation, but most impressive was he was sitting 95 mph (usually more 91-93 mph) and his cutter/slider was up to 90 mph (usually 85-87 mph). Not saying he’s the solution, but god knows the Dodgers need another middle reliever, and he could be worth taking a longer look at.

Anyway, that was fun for once.

The Dodgers go for the series win against the Mets tomorrow at 5:00 PM PST/8:00 PM EST, and it’s unfortunately on ESPN. Luckily, the Dodgers send Clayton Kershaw to the hill against Mets starter Bartolo Colon, which is better.