Behind a strong outing by Clayton Kershaw, some help from the Giants and a timely home run, the Dodgers took down San Francisco 3-2 on Friday night. 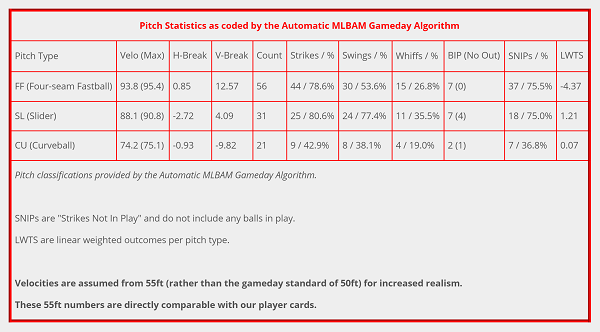 Courtesy of Brooks Baseball, of course

The Dodgers went up 2-0 quickly in this game. In the first inning, Chase Utley got hit by a Johnny Cueto pitch. Corey Seager then dribbled an infield single up the third base line. A wild pitch got Utley and Seager to second- and third base. Then, Cueto did what the Giant broadcast called his “usual” shimmy or whatever and was called for a balk.

Adrian Gonzalez followed a Justin Turner strikeout on a hanging slider with an RBI single.

In the bottom half, Kershaw struck out Denard Span on three fastballs. Then, Joe Panik flied out on a fastball. Kershaw’s first slider of the night was to Matt Duffy, and he deposited it nearly 400 feet into the left field bleachers. It was flat, 90 MPH and belt-high. Oops.

The Giants looked like they had some of their devil magic working in the fifth inning. Mac Williamson (who is a real baseball player) had an infield single and moved to second base on Seager’s ill-advised throw. Brandon Crawford followed that up with an infield single of his own — a play in which Utley should have thrown Crawford out at first base, but he was trying to catch Williamson sleeping at third base. Luckily, Kershaw buckled down and struck out Jarrett Parker and got Cueto to ground out.

The sixth inning is where the Giants got Kershaw. Panik had a 1-out single. With two outs and on Kershaw’s second of two mistake sliders on the night, Buster Posey doubled to left-center field. It was 88, flatter than the one to Duffy and middle-in to one of baseball’s best hitters. Oops, part deux.

The ninth inning rolled around. The Giants brought in their closer Santiago Casilla. Turner led of the inning and did this.

Thanks for not missing that one, Ginger Jesus! Of course, that would be all the Dodgers could muster in the ninth.

The bottom of the ninth was a roller coaster. It started off harmlessly enough. Kenley Jansen got Duffy to fly out to right field. Then, Posey hit a ball to right-center field that was 103 MPH off the bat and 388 feet. Thankfully, he hit it to the wrong part of the ball park. With two outs, Brandon Belt doubled to right field. Then, Jansen walked Gregor Blanco. Yes, that Gregor Blanco. With two on, Jansen went the distance with Crawford but ultimately ended things with a strikeout.

Dustin Nosler began writing about the Dodgers in July 2009 at his blog, Feelin' Kinda Blue. He co-hosted a weekly podcast with Jared Massey called Dugout Blues. He was a contributor/editor at The Hardball Times and True Blue LA. He graduated from California State University, Sacramento, with his bachelor’s degree in journalism and a minor in digital media. While at CSUS, he worked for the student-run newspaper The State Hornet for three years, culminating with a 1-year term as editor-in-chief. He resides in Stockton, Calif.
@DustinNosler
Previous Dodgers @ Giants June 10, 2016: Kershaw vs. Cueto
Next Dodgers focus on athleticism in rounds 6-10 of MLB Draft