After yesterday’s slugfest, today was almost the complete opposite, as the Dodgers and Diamondbacks engaged in a pitching duel, with the Blue Crew eventually falling 2-1. The loss snaps the Dodgers four-game winning streak, which is especially harsh since it taxed the bullpen and was winnable throughout. 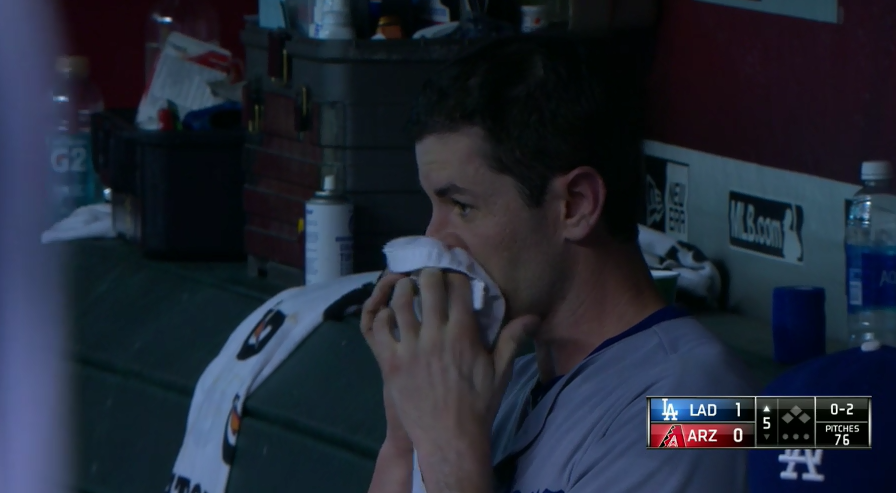 Despite the outcome, Brandon McCarthy shoved tonight, going six shutout frames on an efficient 77 pitches before being removed for … matchup reasons, I guess? Either way, McCarthy only allowed three hits and walked none while striking out eight. He’s certainly been pitching like he wants to makeup for lost time.

The velocity was more in the low-90s today, but the movement was definitely on point, as Jean Segura would testify to.

Adam Liberatore got a scoreless seventh inning with two strikeouts, including one of Paul Goldschmidt, which seemed like a terrible matchup to give the D-Backs. Joe Blanton then entered in the eighth, and while he gave up a walk and a single in his frame to ramp up the tension, he escaped trouble to keep the bad guys without a run.

That brought in closer Kenley Jansen against the top of the D-Backs order, and unfortunately, he gave up a two hits and a walk, including a two-out double to Jake Lamb to tie the game. Pedro Baez got scoreless frame in the 10th, and Louis Coleman followed suit in the 11th.

Unlike last night, it was a rough go of things for the Dodgers offensively. While they did manage to walk a whopping eight times and got 10 hits, they left 15 runners on base. In the end, the timely hitting just wasn’t there, as the Dodgers only scrapped across one run on the night.

That run was put on the board way back in the third inning, and somehow held up the rest of the way. Chase Utley started things off with a double, and after Corey Seager made a “productive out” to move Utley to third, Justin Turner muscled a ball over first base for an RBI single to score Utley and give the Dodgers a 1-0 lead.

In the 12th inning, Casey Fien gave up a lead-off triple to Lamb, and after walking the bases loaded intentionally, Brandon Drury took advantage of a drawn-in infield for the walk-off single.

With the loss, the Dodgers drop to 52-41 overall on the year and 22-23 away from Chavez Ravine. The lead in the NL West is still at 5.5 games as the Giants also blew a late lead while playing the Padres. The race for both home-field advantage in the NL Wild Card game and to make the game itself is now led by the Dodgers by a margin of 2.5 games as the Mets and Marlins also both fell today.