The Dodgers got an important win tonight over the Phillies, 9-3, as it vaulted the Dodgers into a tie for first in the NL West. After scuffling a bit to start the second half of the season, the Dodgers have now won four straight and are 13-9 after the All-Star break. They are also now 5-3 in the post-Yasiel Puig era, because people made that a thing.

Coming off last night’s offensive explosion, the Dodgers brought the lumber yet again.

The fireworks started quietly in the second inning, as Joc Pederson singled softly on a nice piece of hitting into left to drive in Adrian Gonzalez (who reached on a double) from third for the team’s first run. Howie Kendrick immediately followed that by smashing a two-run homer to center.

They weren’t done in inning yet, as Kenta Maeda started a rally again by doubling over the left fielder’s head.

With two down, Corey Seager singled to right to score Maeda, and the Dodgers had four runs in the inning.

In the third frame, the Dodgers got two more runs after A-Gon doubled again and Yasmani Grandal launched a ball over the right-field fence for a homer.

Things continued to look up in the fourth inning, when Justin Turner crushed a ball over the wall in left-center field for a two-run shot that also scored Chase Utley (single).

The fifth inning marked the fourth inning in a row the Dodgers scored a run, as Howie doubled to left-center to score Joc from first after he walked.

In total, the Dodgers got nine runs on 13 hits (four doubles, three homers) and three walks. Imagine if Josh Reddick starts hitting like he normally does. 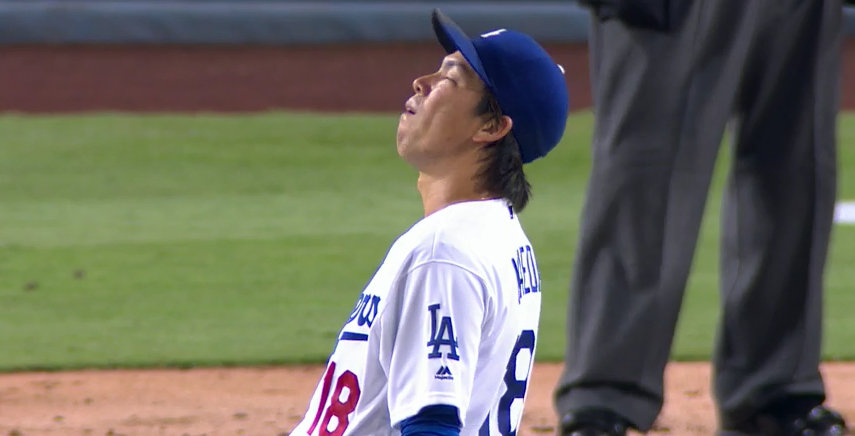 It’s fortunate the Dodgers were on it today, as Maeda had a bit of a struggle. Maeda burned through 104 pitches in just five innings, and while he struck out four, he also surrendered three runs on six hits (including two dingers) and two walks.

So that required for the bullpen to work a bit of overtime again, and new long-man Jesse Chavez did the job by geting two scoreless innings and generally bouncing back nicely from a disastrous start to his Dodgers career.

Grant Dayton was next, and he managed to avoid the Brim curse, getting a perfect inning and striking out two.

J.P. Howell finished the game off with a scoreless inning of his own, making it four scoreless for the bullpen, giving up just three hits and striking out five.

Clayton Kershaw isn’t as impressed as me, though.

With the victory, the Dodgers get to 64-49 overall and 37-21 at home. The Giants lost today, which means the NL West race is now deadlocked. This is gonna be exciting down the stretch.