The Dodgers lost a tough one yesterday, but bounced back and gritted through an ugly win today. In the end, that’s all that matters, and despite general offensive difficulties, Kenta Maeda not being at his sharpest, and the bullpen looking shaky, the Dodgers got it done in a 3-2 win over Zack Greinke and the Diamondbacks.

Kenta Maeda didn’t necessarily struggle, but the pitches piled up quickly, and he battled to limit the D-backs to a single run in his five innings of work. Maeda did walk three and surrendered three hits, but didn’t allow an extra-base hit and got six strikeouts to prevent major damage.

For a period in the middle of the season, there was legitimate worry that the league had adjusted to his approach and that he’d be more of a high-3/low-4 ERA pitcher going forward. However, Maeda has made adjustments of his own and has emerged on the other side as a quality option in the middle of any rotation.

The offense got started quickly in the first inning off Zack Greinke, with a Justin Turner triple driving in Chase Utley (double) from third.

Turner later scored on a passed ball, and the Dodgers got the early runs they’ve been lacking for a while now. It took until the fourth to get on the board again, and even that was a bit more lucky than good. The Dodgers got on the board thanks to a Jean Segura throwing error on a Howie Kendrick potential double-play ball, which scored Adrian Gonzalez (single) from second.

J.P. Howell relieved Maeda to get Jake Lamb and promptly gave up a double, and I honestly can’t wait for Julio Urias and Alex Wood to be ready out of the pen. Josh Fields then entered to get the rest of the sixth, and he did so. Despite walking the first batter he faced, Fields then struck out the next two and induced a routine fly to right to escape the jam. Pedro Baez took over in the seventh to get the top of the order, and despite allowing a double, he struck out two batters in his scoreless inning of work.

Can't believe some of you were worried about Baez/Goldschmidt. TOTAL CONFIDENCE.

Paul Goldschmidt is 1 for 11 with 6 Ks against Pedro Baez. cc @DustinNosler

Anyway, Grant Dayton then started the eighth, striking out Lamb because Dayton is awesome (1.64 ERA/2.96 FIP). For whatever reason, that was the only batter he faced, and Joe Blanton entered to setup Kenley Jansen. Blanton walked the bases loaded, and due to unknown reasons literally nobody was up in the pen, so it’s a good thing he got a ground out to end the threat. 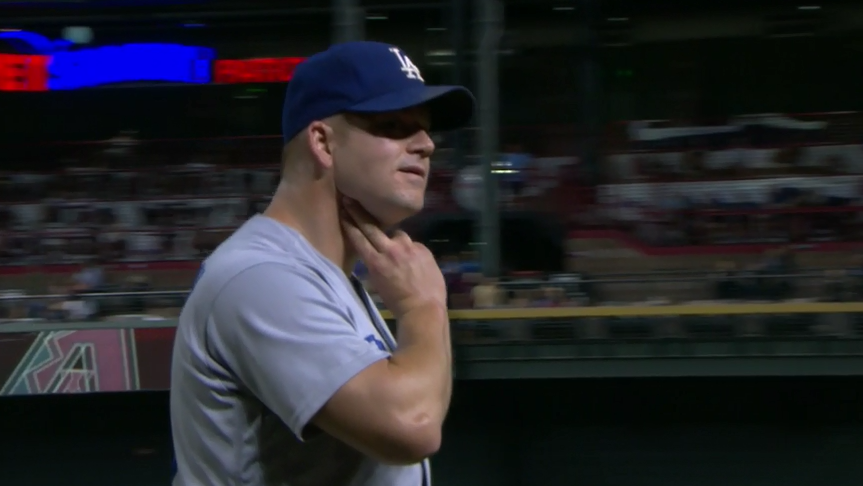 GLAD YOU COULD HAVE A LAUGH ABOUT IT JOE

Kenley Jansen entered for the ninth to get the save, and while he got Segura to routinely fly out and then got Chris Owings down 0-2, Owings somehow got on top of a mid-90s cutter at his chest and drilled a ball to left center for a triple. Paul Goldschmidt then hit a long fly ball to right-center to drive in Owings to cut the lead to one, but Kenley got Lamb got ground into the shift for the save.

I like excitement, but definitely not this kind of excitement.

Still, it was an offensive struggle for most of the night, and five hits and four walks while scoring two of the three runs on an error and a passed ball is not what you generally want. But a win is a win, whatever way you get it, and the Dodgers got an important one on the road with the next two being anything but guaranteed.

With the victory the Dodgers improve to 83-64 on the year and 36-37 on the road, again one win away from achieving my desired goal of at least .500. YAY! In not-so-yay news, however, the Giants blew out the Cardinals, so the lead in the NL West is still at 4 games.