Tortured by having to listen to Bob Costas and Jim Kaat complain that the game isn’t moving quicker so they can just collect their paycheck and leave, as well as their constant terrible cliches and other cringe-worthy analysis, the Nationals also helped to scare the Dodgers into losing 8-3 in Game 4 of the NLDS to put the Dodgers in a hole 2-1.

At least the game got started in a nice way with this Vin Scully opening on MLB Network.

Then everything went to shit.

Kenta Maeda was bad. It was as if he watched Clayton Kershaw and Rich Hill gag and said, “Nah, bro, I can do you one better.” Maeda started the game off by loading the bases in the first inning before escaping narrowly, but then seemed to settle down in the second by getting a 1-2-3 frame. Unfortunately, the third inning happened, and he gave up a run on a double to Jayson Werth and another on a single to Bryce Harper. The scoring was capped by a two-run shot by Anthony Rendon in what ended up as a four-run inning.

Maeda lasted three innings and struck out four, but gave up four runs on five hits and two walks. Let’s see how that rotation is doing so far … oh … oh no.

Kershaw, Hill, Maeda, Urias during the regular season at 2.72 ERA. So far in the postseason, it's a 8.03 ERA. Yeah, should've expected it.

The bullpen did well, though, with Pedro Baez, Grant Dayton, Josh Fields, Luis Avilan, Joe Blanton, and Ross Stripling combining for 5.2 innings of scoreless ball. Oh yeah, except for that 0.2 innings where Kenley Jansen gave up four earned on two hits, a hit by pitch, and a walk.

The Dodgers scored in the first on a Corey Seager double…

…and then a two-run homer by Carlos Ruiz in the fifth, but did nothing else.

They went 0-for-4 with runners in scoring position and finished the game with just six hits and two walks.

I would write more stuff, but why? 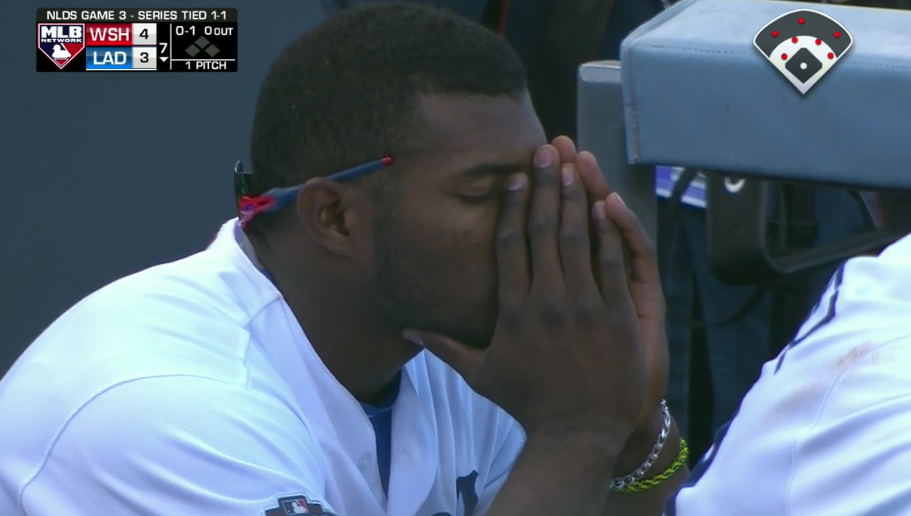 So obviously the series now sits at 2-1 in favor of the Nationals and things will stay in Los Angeles for Game 4 of the NLDS. That we know, but tomorrow’s game is an unknown in more ways than one.