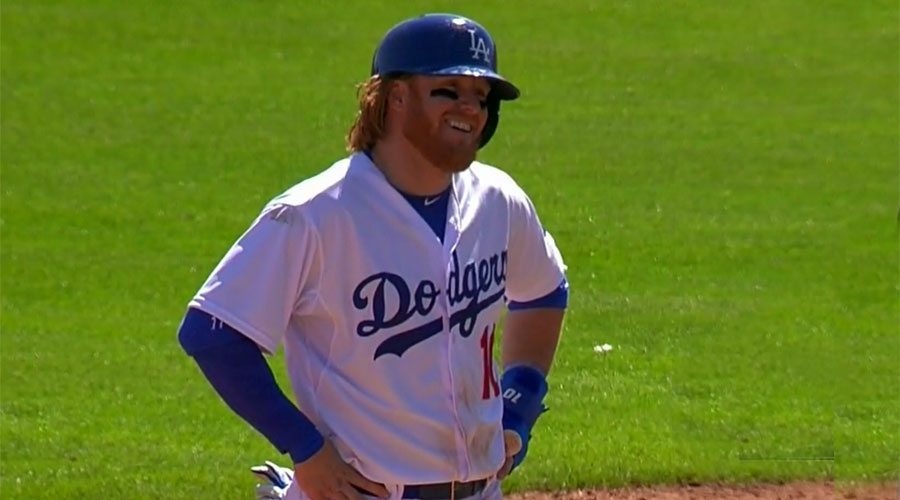 Justin Turner agreed to a new contract with the Dodgers on Dec. 12 and officially signed the deal on Friday. It was for four years and $64 million. It breaks down as follows:

Since the luxury tax is calculated using average annual value, it doesn’t really matter that the Dodgers have slightly backloaded Turner’s contract. I’m sure there’s some sort of accounting reasoning for the decision, but it almost seems more prudent to frontload a contract like this for a 32-year-old, but I’m just a lowly web logger.

He is now one of four players the Dodgers will have under contract after 2018 (Rich Hill, Kenley Jansen, Kenta Maeda). This doesn’t include players with opt-outs like Clayton Kershaw, arbitration-eligible guys like Joc Pederson and players receiving deferred payments like Scott Kazmir.

Things are setting up well for the Dodgers in the 2018-19 offseason, when there project to be many high-end, high-quality free agents available, including the aforementioned Kershaw (who will exercise his opt-out). The team is being built from the inside-out in the meantime. The Dodgers haven’t (yet) traded any of the big-name prospects like Corey Seager or Julio Urias, as the highest-rated prospect this front office has traded so far has been Grant Holmes, who was dealt to acquire an elite-level pitcher in Rich Hill (and a then-solid outfielder in Josh Reddick). That’s important because having the ability to stockpile your MLB roster with young, cheap, controllable talent is a key component to the success of any franchise. Once the prospects pan out or flame out, then it’s easier to add premium free agents or to trade prospect capital for established, good MLBers (hi, Brian Dozier).

What does this have to do with Turner’s re-signing? Let’s take a brief look.

Turner hasn’t played off the hot corner much since signing with the Dodgers  — 48 non-third base appearances in 386 games as a Dodger — but he might have to move positions in the third year of his 4-year contract if the Dodgers have their sights set on Manny Machado. I’m sure 29 other teams would have their collective eye on Machado, but there are few teams that will be able to sign him when he hits free agency after his age-25 season and the Dodgers are one of them. There’s no way to know if the team wants to do that, but it makes so much sense.

The fact that the Dodgers signed Turner for four years means they’re perfectly comfortable with having him at third base for the duration of his deal, but if a better option like Machado comes along after Adrian Gonzalez‘s contract expires following the 2018 season, Turner could slide over to first base and play out the last two years of his deal. And if Cody Bellinger is still in the organization, he could handle left field for those two years. Versatility is the name of the game.

Turner’s re-signing was a necessity for the Dodgers. They’ll handle 2018 when 2018 comes around. Until then, Turner is the Dodger third baseman, the leader of the clubhouse and a damn good hitter. Here’s hoping his knee holds up, his increased power sticks and his defense continues to be above-average or better.

The Dodgers didn’t have an MLB-ready third baseman ready to take the reins (and probably won’t for awhile), and they weren’t about to move Seager off shortstop after one season for anyone but the best of the best defensive shortstops (someone like Andrelton Simmons, or if Erisbel Arruebarrena hadn’t busted so hard), so bringing back Turner — a premium free agent, even if he was their own — was a no-brainer for the Dodgers.

The next few years are going to be fun. I expect many Dodgers-Cubs playoff matchups, because aside from the Cardinals, they are the two best-run teams in the National League (and maybe all of baseball). Continued execution of the current plan is how dynasties are built. Stan Kasten knows exactly what it takes, and he’s doing his level best to replicate what he helped create in Atlanta in the ’90s and early 2000s. So far, so good.

Dustin Nosler began writing about the Dodgers in July 2009 at his blog, Feelin' Kinda Blue. He co-hosted a weekly podcast with Jared Massey called Dugout Blues. He was a contributor/editor at The Hardball Times and True Blue LA. He graduated from California State University, Sacramento, with his bachelor’s degree in journalism and a minor in digital media. While at CSUS, he worked for the student-run newspaper The State Hornet for three years, culminating with a 1-year term as editor-in-chief. He resides in Stockton, Calif.
@DustinNosler
Previous 2016 Dodgers in Review: RHP Brandon McCarthy
Next Joe Blanton’s return to Dodgers a possibility, but does he actually solve a problem?