Joe Blanton’s return to Dodgers a possibility, but does he actually solve a problem? 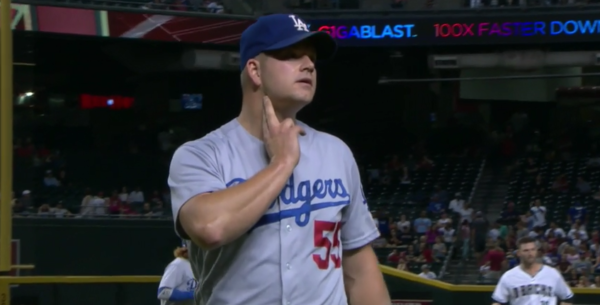 Even if the Dodgers do nothing else this off-season, they’ll still likely enter the 2017 season as favorites to win the NL West and one of the favorites to win the World Series. As we’ve explored recently, though, that doesn’t mean the team is without flaws. One of those flaws is that while the Dodgers have many above-average bullpen options, they still lack a reliable bridge to closer Kenley Jansen.

Interest in Joe Blanton is picking up now that several elite relievers have gone off the board. Return to #Dodgers a possibility.

Blanton lives in Napa Valley, where he owns a winery. All things being equal, he'd prefer to pitch for West Coast club.

Everybody is aware of Blanton’s collapse in the NLCS by now, but that does get overplayed as he was an unsung hero of the NLDS to begin with. But playoff performance in those samples is not what concerns me, rather it’s whether a potential return of Blanton even solves a problem of the Dodgers to begin with.

At a glance, Blanton seems like a tier above options like Grant Dayton, Pedro Baez, Adam Liberatore, Josh Fields, Chris Hatcher, and Josh Ravin, either due to performance or track record. Blanton has a 12-year career and is a World Series winner, and more importantly he had a 2.48 ERA and a 3.37 FIP in 2016, while striking out 25.4% of batters, walking just 8.3%, and limiting homers to 7.4% per fly ball.

However, there are reasons for concern, namely that he carried a .240 BABIP and that the 7.4% HR/FB rate might be unsustainable. That would be concerning because Blanton carries a 45.6% fly ball rate that’s paired with a low-for-a-fly-ball-pitcher 5.3% infield fly rate as well. All of that adds up to a 4.36 DRA, and while he’s likely not that bad (and did have a 3.20 DRA in 2015), it’s a concerning figure for a reliever who just turned 36.

It’s true that stuff-wise Blanton is throwing his fastball and slider as hard as ever, and thus he seems healthy and ready to go in 2017, but Blanton also seems to have actually been somewhat worse than he showed in 2016. That’s not to say that re-signing him is a bad idea, as the Dodgers could surely use another above-average veteran arm on a short-term contract, but the Dodgers are looking for a setup man and Blanton likely doesn’t fill that void.