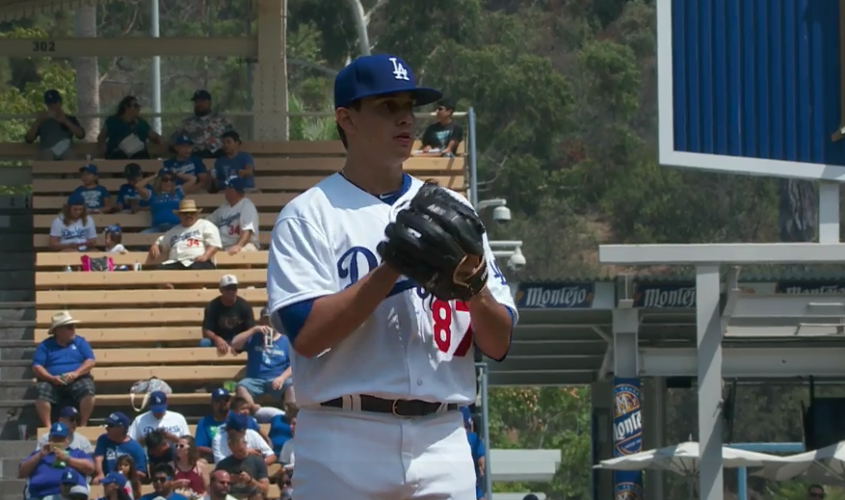 What happened in 2016: One of the Dodgers’ top pitching prospects, Jose De Leon made his Major League debut with the Dodgers after dominating in Triple-A Oklahoma City.

Since being drafted in 2013 in the 24th-round, De Leon has improved and grown immensely. The young right-hander from Puerto Rico moved up the prospect rankings in 2016 after he pitched impressively in Triple-A, going 7-1 with a 2.61 ERA in 16 starts for the Oklahoma City Dodgers. He struck out 32.5 percent of batters, good for a 11.57 K/9 over 86 1/3 innings, with only 20 walks allowed. Dustin ranked De Leon at No. 3 on his annual prospect list going into the 2016 season.

His season started off a bit slow. JDL built up his strength during an extended Spring Training program during the first month of the season, and then did not pitch for a month after his outstanding 2016 debut with OKC due to arm fatigue. He came back and pitched tremendously in Triple-A over the summer, earning him a shot with the Dodgers. De Leon’s dominance was at its peak in August when he took a no-hitter into the seventh inning on Aug. 22 in New Orleans, striking out 10 and walking none. He ended up allowing one hit over seven scoreless innings, and the touted prospect would soon find himself on the mound for the Dodgers less than two weeks later.

De Leon, who had just turned 24 years old (Aug. 7), got the call to the majors after injuries befell multiple starting pitchers on the team, including Brett Anderson (blister), Bud Norris (back strain), Scott Kazmir (back and neck) and Rich Hill (blisters).

He won his first two major-league starts (his debut was quite impressive), but did not make the postseason roster for the Dodgers after scuffling down the stretch. JDL did not make it past the fourth inning in his final two starts with the Dodgers in September against Arizona and San Diego, allowing 11 runs on 11 hits in six innings combined.

2017 status: The Dodgers traded De Leon to the Tampa Bay Rays in exchange for Logan Forsythe on Jan. 23. He should have a legitimate shot at the Rays’ rotation out of Spring Training.

Stacie Wheeler, born and raised in So Cal, has been writing about the Dodgers since 2010. She wrote daily as the co-editor of Lasorda's Lair for five long years, and she has also written for Dodgers Nation, Dodger Blue 1958 and The Hardball Times. She currently contributes to True Blue LA. Stacie graduated from the University Of Southern California with a bachelor's degree in Cinema-Television. You can also watch her videos on her YouTube channel, DishingUpTheDodgers.
@StacieMWheeler
Previous 2016 Dodgers in Review: 2B Chase Utley
Next Spring Training Notes: Kershaw’s back, Urias’ innings, health of Ryu & Trayce, Yimi to DL