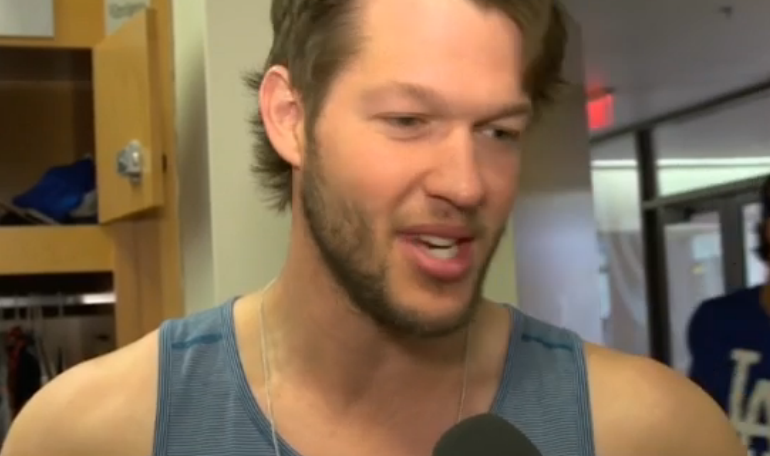 Yesterday, baseball returned as Dodgers pitchers and catchers reported for Spring Training, and I didn’t write about it cause I’m so damn lazy. Of course, nothing much happened as workouts don’t start for pitchers and catchers until today and position players don’t report until next week Monday, but the important thing is that baseball is back.

Speaking of back-related things (how’s that for a transition?), Clayton Kershaw spoke about the health of his after he threw a bullpen.

“I’m doing good,” said Kershaw, who missed 2 1/2 months last season with a herniated disk before returning to be a postseason factor. “I’m excited to give it a good test in Spring Training. But no worries or concerns for me.” Kershaw said he has changed his conditioning routine to manage his back issue, but had already thrown “four or five times” off a mound before arriving in Arizona, and expects to pitch in an exhibition game the first time through the rotation. “The routine is a little different, but not drastic changes, which is great,” he said. “I feel like I’m still able to get the work in. I’m a little more aware. Instead of my pushing through stuff, I’m just a little more aware. For the most part, not a lot has changed and it’s good.”

Hopefully he actually does mean it when he says he won’t push it, but I’m … uh, skeptical.

The main thing is that he’s healthy and ready to go by all accounts.

As for another phenom lefty, Andrew Friedman pointed out the obvious about Julio Urias‘ innings limitations in 2017.

“He’s not at the point of his development where he’s going to make 32, 33 starts and throw 200-plus innings,” Friedman said. “So exactly how we manage that and when is what we’ve spent some time talking about this winter, and we’ll continue to talk about it throughout the spring. … We don’t really have a set innings number. It’s so individualized,” Friedman added. “But I feel confident saying the jump up to 200-plus and being strong throughout October is not viable for 2017. So the question is to how best manage it.”

This is a common sense precaution for a pitcher going into his age-20 season. I think most fans agree that being cautious is the right thing to do, but there’s always a puzzling amount of people that insist he just throw 250 innings “like Fernando Valenzuela did,” somehow ignoring the fact that surely we all hope Urias’ career is not over as an effective pitcher by 26 like Fernando’s was.

Speaking of health, two of the health question marks coming into Spring Training were Hyun-Jin Ryu and Trayce Thompson.

For Ryu, who has been his own hype man when addressing his health for a month now, it appears he wasn’t just being hopeful as he is not under any restrictions and will throw a bullpen today.

“All the reports have been extremely good. What that means, we’ll see,” Dodgers president of baseball operations Andrew Friedman said. “He’s done everything he can this offseason to come into camp and reclaim his spot. We’re all excited to get a chance to lay eyes on him.”

Before we get too excited, it’s definitely still a long shot that he makes it back as a rotation guy. Even if he does, he probably won’t be the same guy anymore, but I’ve missed Ryu and he could maybe still be effective in some role if he can just stay off the DL.

As far as Thompson goes, the signing of Franklin Gutierrez was seen as an indictment of Thompson’s back since Guti just added to an already crowded outfield, and it does appear like that was the thought process.

The Dodgers are also being cautious with outfielder Trayce Thompson, who missed the final 2½ months of last season with fractures in his back. The good news is that Thompson has resumed all baseball activities, including hitting and running. But the club will make sure he is fully ready before his return. “He’s obviously a little behind in seeing live pitching. He’s working his way back,” manager Dave Roberts said. “We have to keep an eye on him because he’s going to want to get back out there as soon as he can. That’s a credit to him and his attitude.”

If you want to cynical, it sure sounds a bit like the Dodgers don’t quite know what to expect from Thompson in terms of timetable, or at least they’re concerned. Of course, the Dodgers can afford to wait for Trayce because of the enormous amount of depth in the outfield right now, and before his injury last year he proved why patience in his case might be worth it.

Additionally, in a completely non-surprising move, Yimi Garcia was officially placed on the 60-day DL as he will miss the season after Tommy John surgery.

I’ll leave you with everybody loving Chase Utley.