When I wrote about the bullpen last week, the overwhelming question I got wasn’t about those in the bullpen (and, conversely, in the rotation), it was, in effect: “What about Hyun-Jin Ryu?”

Well, take a look at this from Andy McCullough today.

Yes, it’s the second day of camp. Yes, the season is still six weeks away. Yes, he’ll likely add a little more sitting velocity. But, this is precisely why I didn’t include Ryu in any projection and why fans (and the Dodgers) need not to count on anything from him.

“Ryu has missed the last season-and-a-half after having shoulder surgery last May. He has not appeared in a Major League game since Game 3 of the 2014 National League Division Series (Oct. 6, 2014) — a 6-inning, 1-run performance on the road against the Cardinals. In that game, Ryu averaged 92.8 MPH on his 4-seam fastball. Normally, he would sit around 91 MPH and top out at 95 MPH with his fastball before his injury.”

“It’s probably best not to expect much from Ryu this season. That way, if he doesn’t come close to regaining his old form, it’s less of a disappointment. It’s highly unlikely — at least this season — that Ryu is the guy he was before the injury. He was a legitimate No. 2 starter. Now, if he’s a decent No. 4/5 starter, that’d be a huge win. Then again, even that feels optimistic.”

All of this still holds true. In fact, it’s probably a more dire situation now than it was in July of last year since Ryu has thrown 4 2/3 innings since that playoff performance mentioned above. That was 28 months ago. By the time the season starts, it’ll be about 30 months. To expect Ryu to be ready for a full starter’s workload — or anything even close to it — is setting oneself up for massive disappointment. 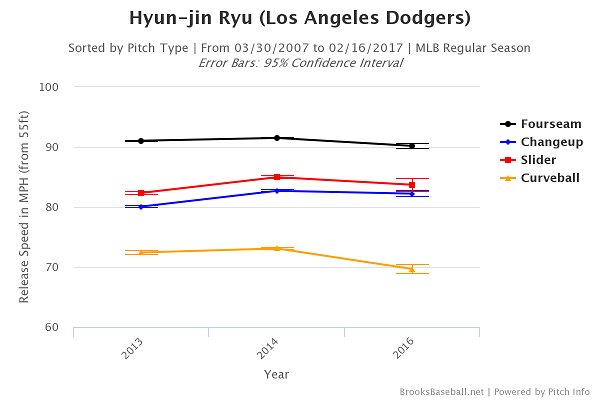 The 4 2/3-inning sample size may not be the best way to make this point, but his fastball velocity was down 1.3 MPH. This came after reports he was in the mid-80s with his velo and touching 90 in his rehab last season, so his velocity isn’t where it once was. Since he showed plus-command before his myriad of injuries, he could be successful as an 88-90 MPH pitcher because of his plus-changeup and solid breaking pitches, but who knows if that command is still there. If it is, he’s definitely one of the five-best starters on the 40-man roster. But, we won’t know until he pitches.

Spring Training will be a nice glimpse into what we might get from Ryu this season (and beyond), but barring anything unforeseen, he won’t crack the Opening Day rotation. He just won’t have the workload or the sample size to determine whether he’s truly ready. A 60-day disabled list trip to stay at extended Spring Training might be in order, and that’s likely the best way to give him the best chance to be successful.

Of the (now) nine pitchers I identified who could start a game for the team in 2017, Ryu was listed, but that list didn’t include Rich Hill, who was a free agent at the time. Now, Ryu might be 10th- or 11th on the starting pitcher depth chart. That doesn’t even factor in young (and healthy) arms like Chase De Jong, Trevor Oaks or Josh Sborz.

I love Ryu as much as the next Dodger fan. I want him to come back and be (or close to) the pitcher he once was. But I’m also grounded in reality. Odds are better than not that he never gets back to that level. He might not even be an effective pitcher at the MLB level anymore.

Before we start penciling him into the starting rotation, we might want to see how he handles Spring Training and any rehab that he’ll (likely) be on once the season begins.

Dustin Nosler began writing about the Dodgers in July 2009 at his blog, Feelin' Kinda Blue. He co-hosted a weekly podcast with Jared Massey called Dugout Blues. He was a contributor/editor at The Hardball Times and True Blue LA. He graduated from California State University, Sacramento, with his bachelor’s degree in journalism and a minor in digital media. While at CSUS, he worked for the student-run newspaper The State Hornet for three years, culminating with a 1-year term as editor-in-chief. He resides in Stockton, Calif.
@DustinNosler
Previous Spring Training Notes: Kershaw’s back, Urias’ innings, health of Ryu & Trayce, Yimi to DL
Next Corey Seager wanted to make sure you knew that was not his dong