Adrian Gonzalez, Chase Utley and some thoughts on the Dodgers’ 1B situation

Adrian Gonzalez is the modern-day ironman. Since 2006, no player has appeared in more games than Gonzalez — 1,745. Robinson Cano is second at 1,716. But with a sore elbow just a couple days into Spring Training, there is some doubt surrounding how many games he might play. A separate conversation is how many games he should play.

He’s averaging nearly 157 games played per season for 11 years. While his production has remained consistent for most of those seasons, he had a noticeable decline in 2016, and we’ve written about it. I’ve also expressed my desire for Gonzalez to play fewer games during the course of the rigorous MLB season. 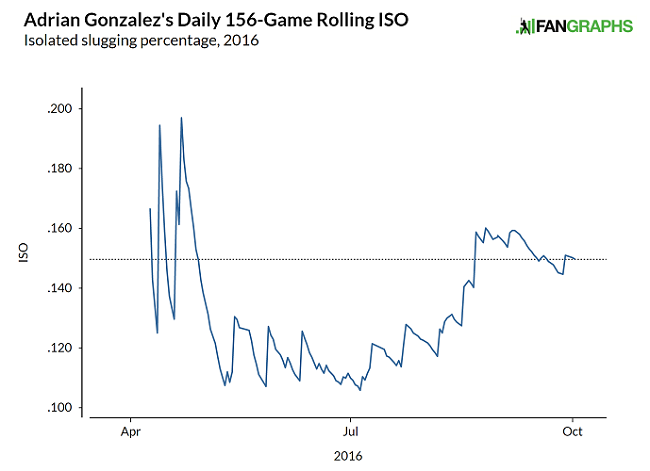 As you can see, he had a massive dip for a good majority of the season before recovering to be around MLB-average. He finished with his lowest ISO, wRC+ and wOBA in his career (full seasons). With a sore elbow and his aging another season, it’s not realistic to expect his power to return to pre-2016 levels. He has no speed and has seen his fly ball rate decrease four seasons in a row.

The natural reaction would be to expect Cody Bellinger to get playing time at first base if Gonzalez goes down with an injury (he has never been on the disabled list in his career). Granted, he has only 12 plate appearances at the Triple-A level, he could definitely benefit from a full season in the Pacific Coast League. It’s certainly possible — and would be even more if he were right-handed — but not as likely as it was a couple weeks ago. That’s when the Dodgers re-signed Chase Utley, even after trading for Logan Forsythe.

Utley, heading into his age-38 season, won’t be expected to play as big a role as he did for the 2016 Dodgers (565 plate appearances), but he could spell Gonzalez at first base sometimes, which is somewhat odd to say seeing as there’s no platoon advantage Utley offers. He only has 33 games played at first base in his career, but he’s an adept infielder and should be just fine on the days he plays for Gonzalez. Sure, he was brought back to be the Team Dad, but that’s not the sole reason he was re-signed. The front office has a vision for his 2017 contribution, and it goes beyond the clubhouse. And you know what? That works.

Gonzalez could benefit from more time off during the season — even against the occasional righty — to be as fresh as he can be for the postseason. Instead of worrying about him reaching the 156-game mark again, he could be just as effective and probably more valuable to the team if he plays, say, 135-140 games.  That would involve him also sitting against left-handed pitching, against whom he had a .244/.293/.310 slash line with a 67 wRC+ against lefties last season. Over the last three seasons, it isn’t much better: .247/.300/.357 with an 85 wRC+. With a (hopefully) healthy Scott Van Slyke, the addition of Forsythe, and Justin Turner‘s ability to move across the diamond, the Dodgers should be able to save Gonzalez some unnecessary games played and not lose much offensively.

With a roster as deep as the Dodgers’, this is precisely the kind of transition they can make. There’s no reason for a 35-year-old to play that many games with plenty of viable backup/platoon options in the organization. It’d be nice if the young buck were truly ready, but we’ll cross that bridge in a year or so (if Bellinger hasn’t forced his way into left field by then). Gonzalez’s “streak” should come to an end, hopefully by the Dodgers’ choosing. And hopefully, their decision will be rewarded come October.

Dustin Nosler began writing about the Dodgers in July 2009 at his blog, Feelin' Kinda Blue. He co-hosted a weekly podcast with Jared Massey called Dugout Blues. He was a contributor/editor at The Hardball Times and True Blue LA. He graduated from California State University, Sacramento, with his bachelor’s degree in journalism and a minor in digital media. While at CSUS, he worked for the student-run newspaper The State Hornet for three years, culminating with a 1-year term as editor-in-chief. He resides in Stockton, Calif.
@DustinNosler
Previous Joc Pederson set for career year after learning from Domingo Ayala
Next Yasiel Puig’s 2015 and 2016 seasons represented in picture form