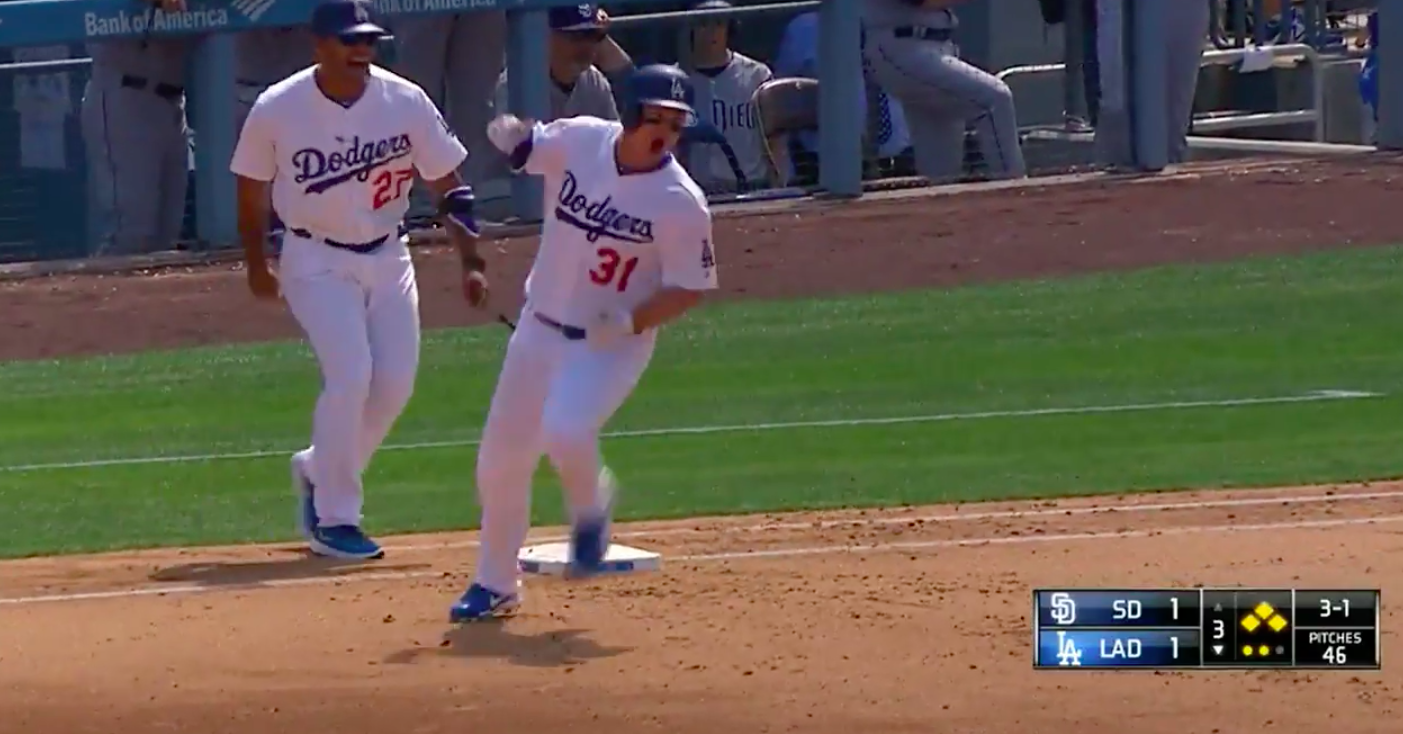 Baseball that counts is back, and for Dodger fans, Opening Day 2017 provided plenty of opportunities to celebrate.

Before the game, the Dodgers honored Wally Moon on his 87th birthday by having him throw out the ceremonial first pitch alongside Tommy Lasorda.

Moon and Lasorda were introduced by Joe Davis, calling his first Opening Day at Dodger Stadium. Davis was introduced by a recorded message from Vin Scully. There doesn’t appear to be video online (yet), but you can always listen to Vin Scully singing “Wind Beneath My Wings” if you feel like tearing up a bit.

Once the stage was set, the game got underway. Clayton Kershaw looked … well, about how you’d expect him to look against the 2017 Padres — that is to say, very good. In seven innings, he struck out eight, walked none and allowed two hits. A Corey Seager error in the first inning ultimately led to an unearned run coming in to score, and Ryan Schimpf later took Kershaw deep to break a streak of 19 straight batters retired, but that was about it.

Overall, Kershaw was great, throwing 84 pitches (61 strikes) before exiting with a comfortable lead. His curveball appears to be in fine shape:

Every single Dodger in the starting lineup had at least one hit today (with Justin Turner‘s three hits leading the pack), and there were lots of DINGERS. Joc Pederson broke things open in the bottom of the third with a two-out grand slam:

Yasmani Grandal followed that up with a solo shot to the exact same spot:

In the bottom of the fifth, Seager atoned for his earlier error with a three-run home run:

Grandal further padded the Dodger lead in the eighth inning with his second home run of the day, this time from the right side of the plate:

With a pair of four-baggers, Grandal joins a brief but illustrious list:

We also got to see the new no-throw intentional walk in action a couple of times. The first was issued to Yasiel Puig. We know Puig isn’t fond of being walked intentionally,and this time he responded by flipping his bat:

Chris Hatcher closed out the game for the Dodgers, allowing a run on a pair of hits in the eighth, then pitching a scoreless ninth.

Sarah Wexler is a native Angeleno and longtime Dodger fan. She began blogging about baseball in 2012 on her Tumblr, New Grass On The Field, where she covered an array of topics but especially enjoyed exploring baseball history. She is now a reporter/producer for MLB.com. She earned her master's degree in Sports Management from Cal State Long Beach. She graduated from New York University in 2014 with a bachelor's in History and a minor in American Studies. She's an avid Springsteen fan, which is a big boost to her baseball writer cred.
@sarahwexler32
Previous [VIDEO] Joc Pederson hits the Dodgers’ first HR of the season, a grand slam
Next Good morning, here’s Yasiel Puig in a sheer shirt that has roses stitched on