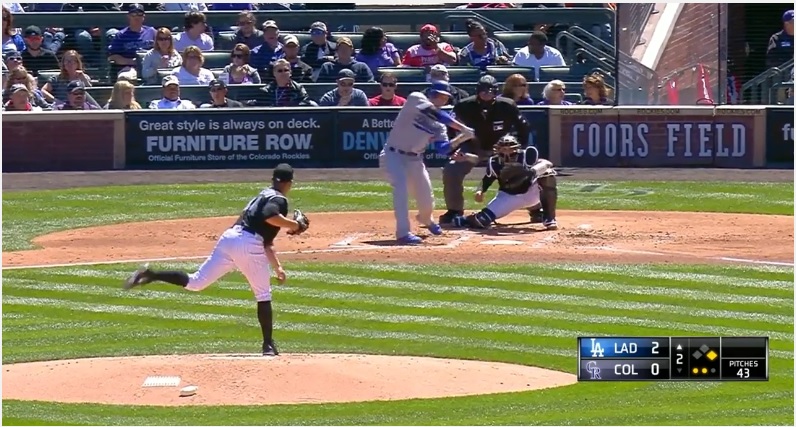 The Dodgers avoided the sweep at Coors Field with a victory in the series finale on Sunday afternoon. Despite losing the first two games to the Rockies, there were a lot of positive takeaways from this game including some offensive progress against left-handed pitching, another wondrous Corey Seager home run, continued excellence from the bullpen plus a little help from the wind.

The Dodgers jumped on left-hander Tyler Anderson early, plating two runs in the first inning. Four of the first six LA batters reached base against Anderson who was struggling early with his command. Logan Forsythe started off things with a leadoff double, followed by a full-count walk to Seager. Justin Turner then roped a double down the left field line, giving the Dodgers an early 2-0 lead.

Seager’s two-run blast in the second to dead center field, his second homer of the year, tacked on another two runs to the Dodgers’ lead over the Rockies.

Maeda looked sharp through two innings, retiring the first seven batters of the games and striking out four. Yet we all know things are never that easy at Coors Field. Just ask Clayton Kershaw. The Rockies cut the Dodgers’ lead in half in the bottom of the third thanks to a two-run home run by Charlie Blackmon.

The Dodgers’ fifth run of the game came in the fourth. Enrique Hernandez‘s leadoff walk was cashed in after Maeda skillfully executed a sacrifice bunt to move him into scoring position. Forsythe, who is dialed in to be a great addition to this club despite any early season batting average rumblings, drove in the run with a single to right field.

Maeda began to falter in the bottom of the fifth. He finished the inning, but not before allowing two additional runs. Pesky Gerardo Parra‘s RBI single and a Carlos Gonzalez sacrifice fly allowed the Rockies to pull within one run of lead.

The Denver wind was on the Dodgers’ side in the sixth against Colorado reliever Scott Oberg, helping Austin Barnes cruise into third with his first career triple, bouncing off the right field wall. A tough error by second baseman Alexi Amarista, who knocked down Andrew Toles‘ sharp liner, brought in Barnes to score.

The Dodgers should have had 10 runs on the board after the lengthy seventh inning thanks to a plethora of defensive mistakes by the Rockies. A wild pitch and a passed ball that deflected all the way into the Colorado dugout should have allowed Seager to score. He reached third well before the ball went into the dugout, but the call stood after a rules check by the umpires. Apparently that is not a reviewable play. Nevertheless, the Dodgers scored thrice in the inning. There was a throwing error by Tony Wolters on a pickoff attempt of Turner at third, and both Adrian Gonzalez and Joc Pederson had an RBI single each.

The swirling trash lends to the post-apocalyptic feel of Coors.

The Dodgers’ offense went into double digits with two out in the top of the ninth with some more assistance from the wind on what should have been a routine ball off the bat of Pederson to Blackmon in center. Scott Van Slyke‘s RBI single thereafter brought in the tenth run.

The wind in Colorado is no joke right now. pic.twitter.com/HgqfNHYBQn

The Rockies managed to score two runs off Kenley Jansen in the bottom of the ninth. This time the wind was thy enemy. Yasiel Puig made a great attempt on a ball to right field (hope he is ok), but the treacherous conditions allowed DJ LeMahieu to triple off the wall, scoring Wolters. They pushed another run across the plate on a groundball, but mercifully the game and series came to a conclusion.

The Dodgers’ bullpen’s dominance was once again on display today. Josh Fields, Luis Avilan, Sergio Romo (that slider is a thing of beauty) and Jansen combined for four innings of solid relief with only Jansen allowing runs.

The Dodgers improve to 4-3 on the season. Although the first two games of the series were frustrating, they concluded the series with some positive results against a left-handed pitcher, and no one died during the three games at Coors. So that’s always a plus.

Things don’t get any easier or less windy when the Dodgers head to Chicago for a three-game series starting Monday. They’ll have to sit through the Cubs’ home opener festivities and celebration of their World Championship. Alex Wood will step in for Rich Hill, who is on the disabled list with a blister. The Dodgers will have to try to figure out a way to beat Jon Lester, who is on the hill for Chicago. First pitch is at 5:05 PST/8:05 EST and will be broadcast on ESPN.

Stacie Wheeler, born and raised in So Cal, has been writing about the Dodgers since 2010. She wrote daily as the co-editor of Lasorda's Lair for five long years, and she has also written for Dodgers Nation, Dodger Blue 1958 and The Hardball Times. She currently contributes to True Blue LA. Stacie graduated from the University Of Southern California with a bachelor's degree in Cinema-Television. You can also watch her videos on her YouTube channel, DishingUpTheDodgers.
@StacieMWheeler
Previous Dodgers @ Rockies April 9, 2017: Maybe don’t get swept
Next Podcast: ‘Dugout Blues’ episode 192 – Opening week, Kershaw, Puig, White