After a 2-4 road trip, fans were understandably frustrated, but worried? I don’t understand the worry. Losing series at Satan Field and away to the defending World Series winners in mid-April is nothing to get concerned about. Still, many seemed to be concerned, so thankfully Clayton Kershaw took the hill for the Dodgers in a matchup against old friend Zack Greinke.

To be honest, Kershaw still didn’t look to be in his best form early in the game. Either he didn’t have the feel for his slider yet, or he’s throwing a cut at 90-91 mph, but either way the pitch didn’t seem to be nearly as effective. Still, when he did break off the 86-88 mph slider, it’s still as unhittable as ever and he proved as much when he found it in the middle innings.

After some early contact luck, Kershaw settled down considerably and ended up almost throwing a ‘Maddux’ shutout. Unfortunately, he didn’t even end up getting a shutout as he gave up a run in the ninth. A bust. Still, on 100 pitches he went 8.1 innings, giving up just a walk and four hits (one double), striking out eight batters.

Pedro Baez, fresh off the DL, was brought on to finish the game. While he did issue a walk and took about an hour, he did eventually end the game without damage.

So obviously Kershaw was the story, but the offense also looked much better.

The Dodgers offense likely had fans concerned in the early innings, as it looked like the same old close-but-not-quite story. With a runner on in the first, Justin Turner and Adrian Gonzalez hit back-to-back flies to the warning track. Then in the second, the Dodgers loaded the bases, but Kershaw himself was up to bat and grounded into an inning-ending double play to save Greinke.

Fortunately, that story didn’t last long. With one out in the third, Greinke gave up four consecutive singles to Corey Seager, JT, A-Gon, and Logan Forsythe for the first two runs of the game.

The scoring continued in the fourth after a two-out single from Andrew Toles led to a walk from Seager, and was cashed in on a double from JT to also double the lead.

A Yasiel Puig sacrifice fly in the fifth made it three consecutive innings with runs, and also gave the Dodgers a 5-0 cushion. That cushion was extended further in the eighth, when Toles hit a two-run blast.

The Dodgers offense finally got right a bit, getting 13 hits and four walks, though only three extra-base hits so a bit of luck was involved. Perhaps most telling is they only struck out four times, giving luck an opportunity to show itself for once.

Nomar Garciaparra broadcasting from the left-field wall was pleased. 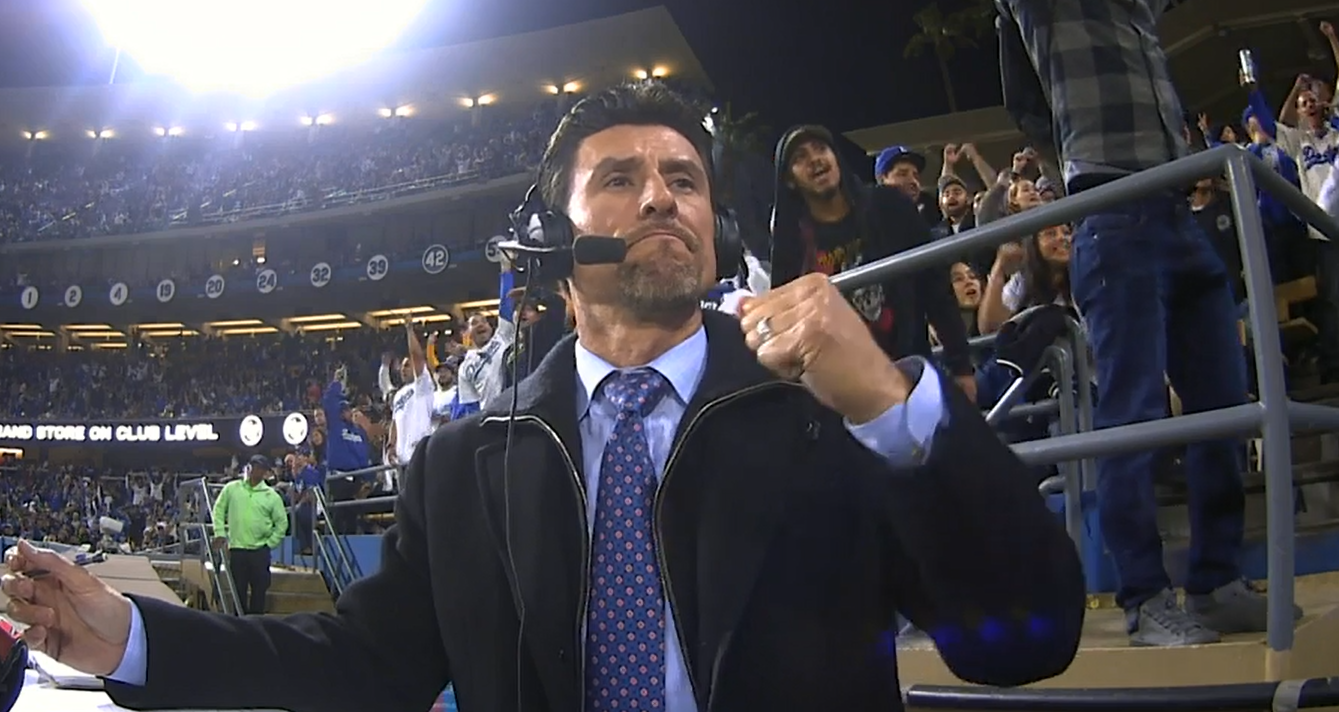 With the 7-1 win the Dodgers improve to 6-5 overall and 4-1 at home, and at least for one day stop people from freaking out again in mid-April.