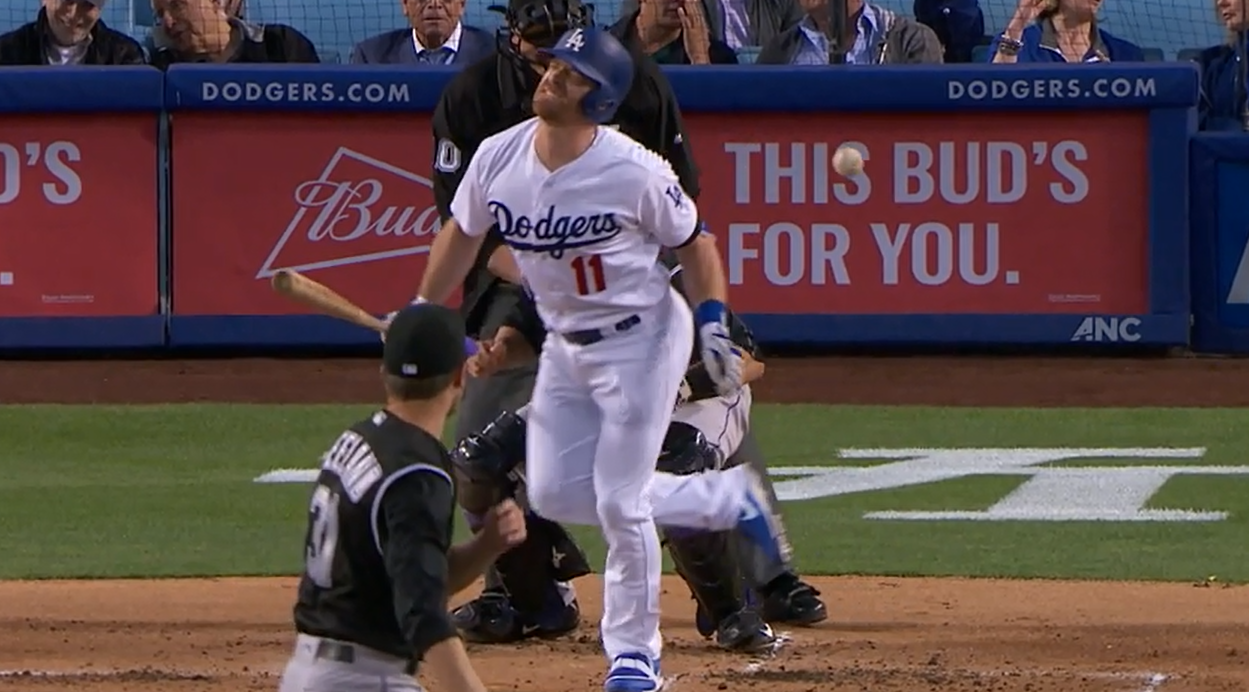 After a 4-3 loss in which a late rally fell just short, the Dodgers have now dropped three games in a row and will not have won a series since the first of the season.

If one wants to take the charitable route, one could say that the velocity lost in Hyun-Jin Ryu‘s last start appears to have been an aberration, and he’s back to sitting in the 88-91 mph range with his fastball now. Additionally, Ryu can still miss bats, as he struck out seven in six innings of work. His control wasn’t an issue either, as he only walked a single batter, but out three of the seven hits he surrendered left the yard. All three homers came on pitches that were grooved middle-middle, so it was his fastball command that was a concern, and it cost him four runs and the game today.

On the plus side, he did make this humorous defensive play that involved hitting Adrian Gonzalez in the face with the ball.

Jury is still out on whether he fits in the rotation for the long haul, however.

The offense, meanwhile, continues to be the main problem. Corey Seager ran his consecutive strikeouts total up to six in today’s game before finally drawing a walk, which kinda sums up the struggles of team. After all, if your best hitter is doing that, it’s probably gonna be hard to score runs.

Two of the Dodgers’ runs came on balls that were basically mishit, as basically none of their hard-hit flies or line drives fell in, because baseball. In the fourth they scored on a Joc Pederson single that was a nubber off the end of the bat that took advantage of the shift to drive in a run. Then in the ninth with runners on first and second and one down, Justin Turner did the same down the right-field line to drive in a run.

Yasiel Puig then seemed to win it for the Dodgers, taking a hanging slider and drilling it to left center. However, it seemed to hang up there forever, falling just short of the wall for the second out of the ninth. Yasmani Grandal then followed JT in the ninth with an opposite field single of his own to drive in another, and suddenly the lifeless Dodgers were down a run with runners still on first and second. Unfortunately, A-Gon’s struggles continued, as he grounded out weakly up the middle to end the game.

It’s not unreasonable to be concerned about how A-Gon looks right now.

The bullpen, however, continues to be a bright spot. Pedro Baez worked two hitless innings in which he allowed just one walk and struck out three. Josh Fields followed to close the Rockies end of things out with a perfect frame of his own and two strikeouts.

To end things on an appropriately miserable note, Logan Forsythe led the game off by getting hit on the toe and had to come out of the game.

Thankfully it doesn’t seem major, but who knows?