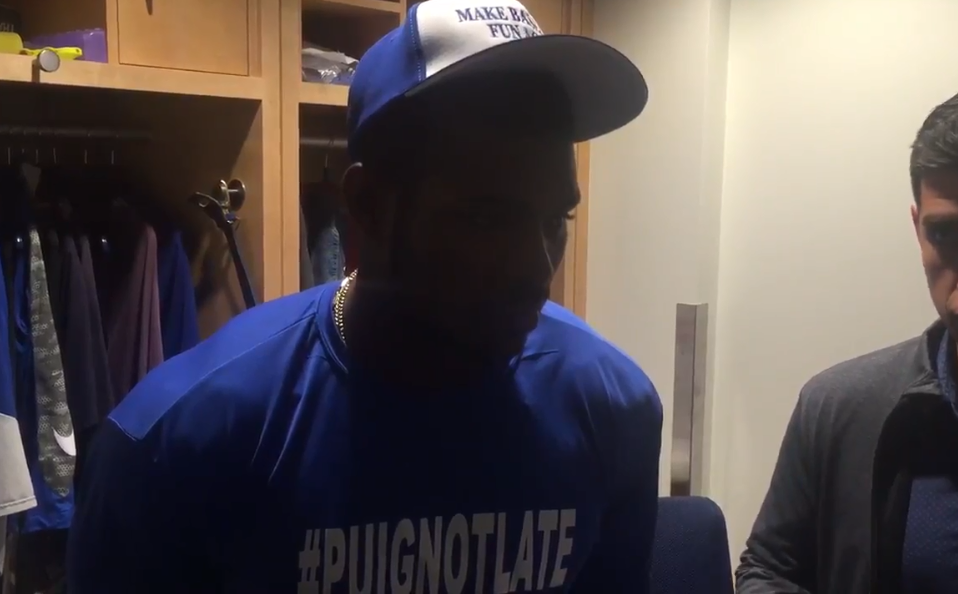 In an article written for MLB.com, among other things Yasiel Puig describes himself as a “comedian”, which is reassuring in the sense that the ‘Make Baseball Fun Again’ side of Puig is not going to go away. However, what he does want to make go away is the discipline and commitment issues that have plagued him in his career.

The great Vin Scully used to call me the Wild Horse because of the way I played. It’s time for me to be that caballo again — that horse again. I want to get back to that place where I had more focus, more discipline at the plate, more discipline with my teammates. Being at the stadium on time to prepare every day is what helps you succeed, and that’s what I want to do this year. Sounds easy doesn’t it? I know it is. That’s why I know I’ll do it.

I also feel like I have to prove to myself that I can be a better teammate and that I can play better baseball. I want to play more games this year, not to get hurt, keep my diet, keep stretching and keep preparing physically for every game, so God willing, I can have my best year in 2017. That’s my personal challenge. It’s hard to be the Wild Horse that Vin Scully called me when I can’t stay on the field.

Later, he talks specifically about how his expression has pissed off other players and how it’s just about him enjoying the game.

There is a passion I have and we have as Latinos because we love to have fun, we love to show our joy on the field, and I think sometimes that confuses people. Sometimes, other teams get upset with our bat flips or expressions, but that’s how we show our joy. The pitcher can strike you out four times in a game so we like to show our joy when we hit that one home run. Baseball is fun. It’s exciting. I enjoy it. It’s a game.

Puig cites his family and other star players for putting him down the right path, specifically the guidance and help of Adrian Gonzalez.

Puig also talks about the Wild Horse Foundation, named as a nod to Vin Scully, and how he’s hosting a poker tournament at Dodger Stadium on May 22 as a fundraiser for kids.

Awesome stuff and a great read.

Then again, of course he’ll say these things, right? Puig’s done similar before, after all, like … oh, last year. Fool me once, shame on you. Fool me four times, shame on me.

As such, the problem I run into with Puig is still his past. Watching him in the first 16 games so far, this is as close to the 2014 version of Puig I’ve seen. Puig’s in shape, the power is there, and the willingness to take pitches is as well.

Knowing what we know and how off-the-field stuff affects his performance, it’s hard to ever assume this is the Puig we’re gonna get for an entire season until he actually does it for an entire season. Heck, even then, there’s always going to be that wonder when he hits the skids. Is it a slump? Did he stop working? Can he fight his way out of it unlike before?

That said, it’s easy to dream. The .273/.373/.545/.919 line on a .244 BABIP is nice, and that comes after a two-game series when he went an extremely unlucky 1-for-9 with three potential homers dying in the cold night air. However, it’s the 14.9 BB% and the 11.9 K% that’s currently most impressive. It’s the career high in fly-ball rate (43%) that echoes the adjustments he tried to make with his swing, paired with the lowest soft contact rate since 2013 (16%) and the highest hard contact rate since 2013 (35%). It’s the lowest chase rate since 2014 (30%) and by far the highest contact rate of his career (77%), as well as the lowest rate of swinging strikes in his career (10%). There are mechanical changes as well (which I may get into in another post), and defensively he seems to be making the right decisions so far as well (baserunning, not so much).

Sample size definitely applies, but if you want to dream, his actions so far back up the words he wrote.

While I’m personally still skeptical, like many other fans, I do want to dream. After all, a Puig that’s even just a good version of himself that falls short of the 2013-14 All-Star version would be a boon to the Dodgers and their goal of a World Series. And baseball’s just more interesting when he’s relevant anyway.