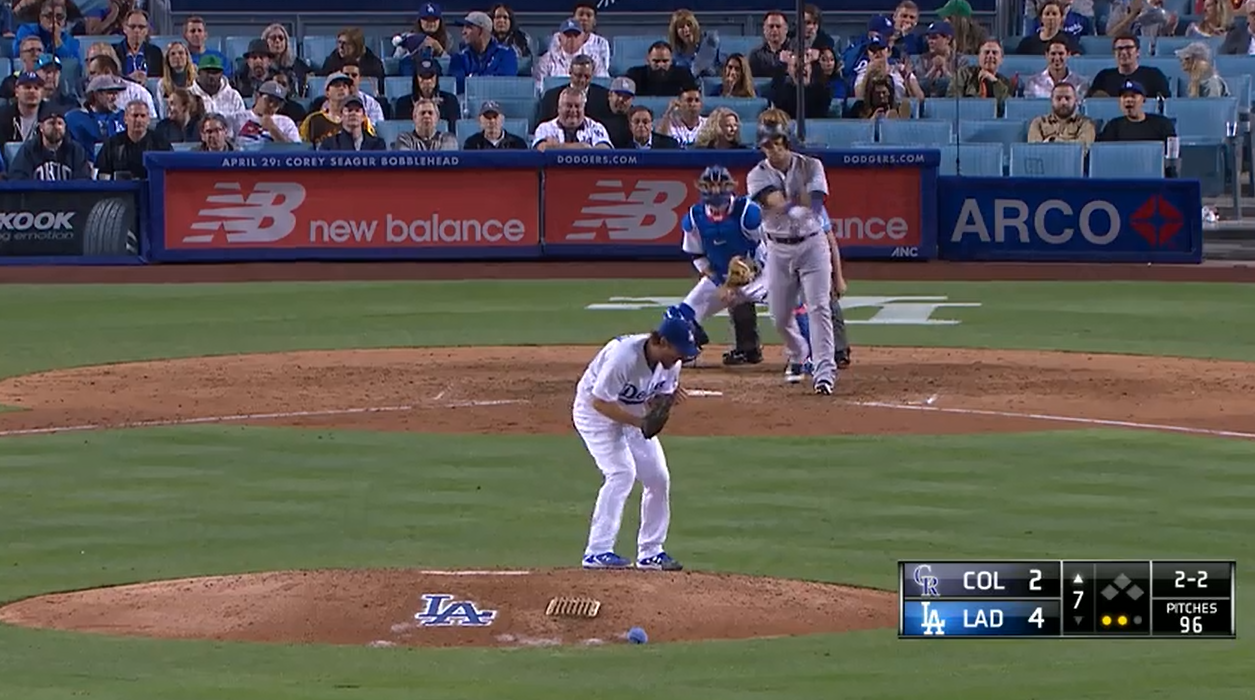 It’s not like this was a must-win game or anything, but it did feel like the Dodgers needed this one going into an off-day and into a road trip after dropping three straight. Convenient then that it was Clayton Kershaw who took the hill for the Dodgers, and he unsurprisingly delivered.

That’s not to say Kershaw’s quest for revenge on the Rockies for his last start was easy, however. Part of his angst was caused by opposing start Tyler Anderson, who he was not pleased with.

The other part was caused by a walk on a 3-2 count and two sharply hit singles on hanging sliders loading the bases with nobody out in the first. After a strikeout, he allowed a run on a sacrifice fly, but wiggled out of further damage with another K. It could’ve been a lot worse.

To say Kershaw settled down was an understatement, as after the first three batters of the game reached for the Rockies, Kershaw then retired 12 in a row. Eventually he did give up a second run in the sixth on a double and a single, but made it through seven innings even after a 27-pitch first. Kershaw ended up striking out 10, walking only the one and allowing just five hits over 97 pitches.

Perhaps there’s minor concern about his slider’s inconsistency, but the curve? The curve has no such issues right now.

The Dodgers seem to not mind hitting lefties this year … as long as it’s Anderson. They struck early in the game on a Scott Van Slyke homer in the second, which feels like the first good thing he’s done this year.

The offense came alive again in the fifth to put up a crooked number, with Chris Taylor leading off the frame with a double and Kershaw reaching on a sacrifice bunt that Anderson short-hopped to first. Enrique Hernandez continued to give some hope that he might be useful again this year, hooking a double to left for a run.

Corey Seager followed by smashing the next pitch for a single past a drawn-in infield for another run.

After an out, Adrian Gonzalez seemingly grounded into an inning-ending double play, but an awkward turn at second led to him beating it out to allow another run to cross the plate.

With a two-run cushion, Luis Avilan entered in the eighth to face a lefty, but promptly allowed a single and was removed for Sergio Romo. Romo induced a weak grounder for an out, then issued an unintentional intentional walk to Nolan Arenado, and induced a fly out. But that was the end of his time, as with the game on the line Dave Roberts turned to Kenley Jansen for the four-out save.

Kenley got out of trouble by inducing a fly ball to end the threat for the inning and also the rest of the game, as he set the side down in order in the ninth to secure the win.

finally, someone gets it. pic.twitter.com/76iRBI6jQb

"A highly rational Internet troll." - Los Angeles Times
@ChadMoriyama
Previous Rockies @ Dodgers April 19, 2017: No more toe injuries, please
Next Yasiel Puig wrote about commitment and has backed it up with action … so far