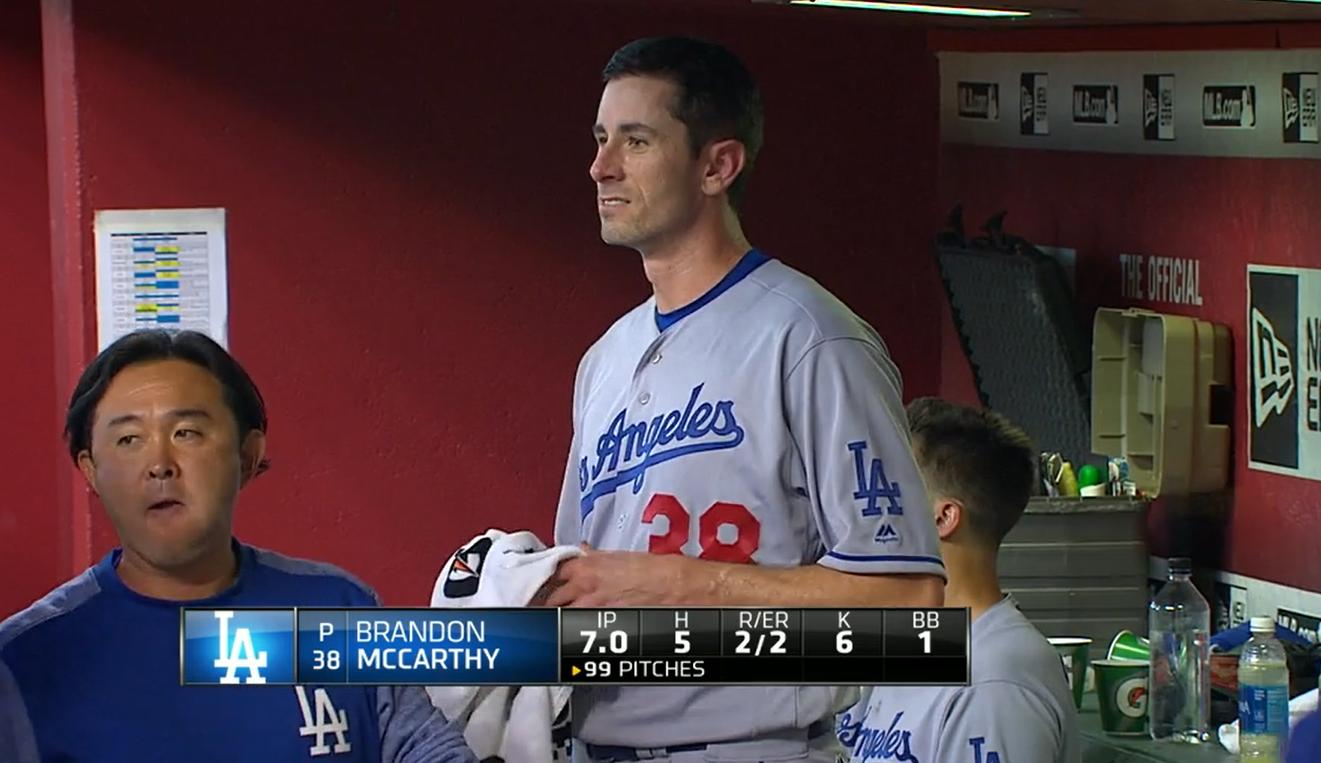 The Dodgers of 2017, perhaps the worst constructed team in sporting history, has pulled off a miracle 6-2 victory this afternoon to salvage something from the series against the D-backs.

It was a bit of a ‘here we go again’ feeling when Brandon McCarthy took the mound, as he surrendered a two-run homer to Paul Goldschmidt in the first to put the Dodgers in a hole. But that was all they would get, as McCarthy pitched a much-needed seven frames and 99 pitches for the Dodgers, limiting the D-backs to just five hits and a walk. Brando also struck out six, and while his location to Goldy was terrible, his command looked as sharp as ever for most of the game.

The offense hasn’t exactly been putting up big innings thus far, but one frame was all they needed in this one after a six-run fifth inning. It started with a walk to Brando and another to Joc Pederson, and after stranding runners in scoring position in the first and third inning, they didn’t have that problem in the fifth when Corey Seager drove in a pair with a double.

Bit of an assist from whatever Jake Lamb was doing there.

Justin Turner then singled to put runners on the corners, and ladies and gentleman, we have a sighting of Adrian Gonzalez driving the ball.

Yasmani Grandal then followed with a no-doubter to right to give the team some breathing room.

That was all they needed as the bullpen didn’t give up like nine runs again tonight, with Pedro Baez and Sergio Romo both pitching scoreless frames.

Is Baez actually going to be goo … no, I can’t finish it.

Of course, nothing can go right without something going wrong, as Joc Pederson exited with a groin issue.

I normally wouldn’t be a ton concerned, but Stacie says this was a problem for a while.

Joc was experiencing some groin tightness during Spring Training per a conversation I overheard.

Hopefully he gets back in there after a day off or something.

With the win the Dodgers get back to 9-10 overall and improve to 3-6 away from home. Most importantly, it prevented a worse fandom meltdown.

The Dodgers now move to San Francisco to play the struggling Giants for four games, with the opener starting at 4:15 PM HST/7:15 PM PST/10:15 PM EST. The pitching matchup will be Hyun-Jin Ryu, who can hopefully get back on track, against Matt Cain, who has actually been the second-best starter this season for the Giants.