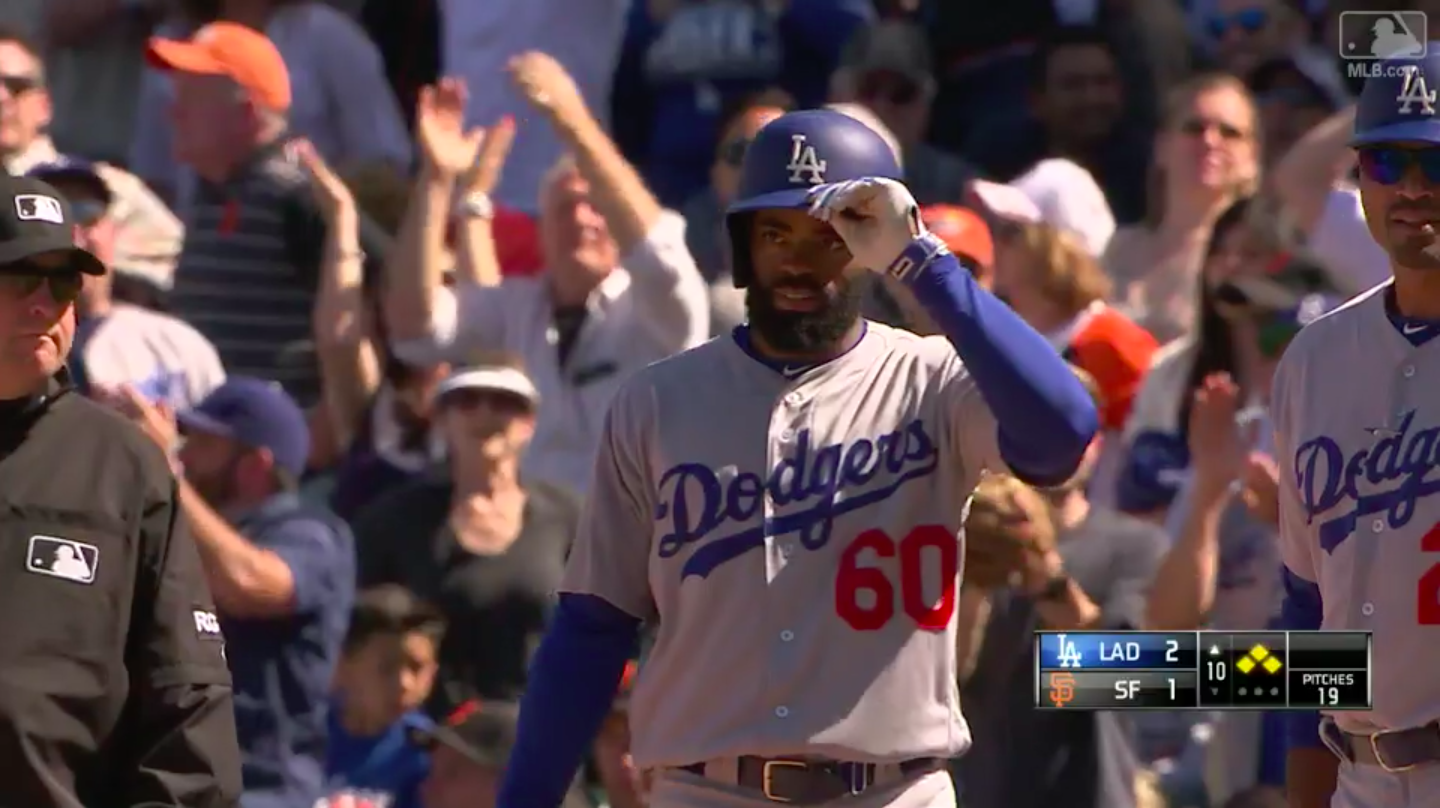 Stop me if you’ve heard this before: the Dodgers struggled against a left-handed pitcher today. Corey Seager, a mere 23 years old today, recorded the Dodgers’ sole run off of starting pitcher Matt Moore with a solo shot in the top of the first.

Birthday homers are ALL the rage. pic.twitter.com/ChrvnXdNLl

Seager became the 19th Dodger to homer on his birthday, first since Matt Kemp in 2014, which was also against the Giants

It was Corey’s second home run in as many days. The birthday boy also made nice catches in both the second and third innings, tracking down pop ups that the sun and wind played tricks with.

Julio Urías, making his first major league start of the season, pitched into the sixth inning, allowing a total of eight baserunners on four hits and four walks while striking out four. Urías, who’d held the Giants scoreless to that point, walked Brandon Belt with one out, and Belt advanced to third on a low pickoff throw that Scott Van Slyke failed to glove. With two outs, Belt came in to score on a base hit by Christian Arroyo.

Outside of the Seager bomb, Moore kept the Dodgers’ bats fairly quiet. In his seven innings of work, he struck out eight and walked three. The only other hit was a seeing-eye single by Chris Taylor to lead off the seventh inning, but Taylor ended up stranded at third base.

The Giants’ bullpen did its job to hold the Dodgers in regulation, with George Kontos and Mark Melancon each delivering 1-2-3 frames.

The Dodger bullpen was equally effective against the Giants, with Josh Fields getting out of Urías’ jam in the sixth, and Luis Avilan escaping a jam of his own making in the eighth with a convenient double play ball. Kenley Jansen entered in the ninth inning with the score tied, and, despite giving up a hit, struck out the side to send the game to extras for the second day in a row.

Cory Gearrin faced pinch hitter Adrián González to start the top of the 10th and, in spite A-Gon swinging at ball four twice, he ended up drawing a walk. Left-hander Steven Okert came in to face pinch hitter Chase Utley, whose slow roller to third base resulted in an infield single. Yasmani Grandal drew a walk to load the bases for Andrew Toles, who singled, scoring pinch runner Ross Stripling from third.

Hunter Strickland then replaced Okert, and he got Enrique Hernández to pop out into foul territory, but Buster Posey, playing first base today, bobbled the ball on the catch, making him unable to nab Utley at the plate. Seager was walked intentionally, and the Dodgers added two more runs on a Justin Turner base hit and a Taylor four-pitch walk. The inning finally ended with Stripling flying out against Neil Ramirez.

Thankfully, a four-run lead was enough this time, and Chris Hatcher finished things off for the Dodgers, inducing two fly outs to center and a lineout to shortstop to complete the split.

Sarah Wexler is a native Angeleno and longtime Dodger fan. She began blogging about baseball in 2012 on her Tumblr, New Grass On The Field, where she covered an array of topics but especially enjoyed exploring baseball history. She is now a reporter/producer for MLB.com. She earned her master's degree in Sports Management from Cal State Long Beach. She graduated from New York University in 2014 with a bachelor's in History and a minor in American Studies. She's an avid Springsteen fan, which is a big boost to her baseball writer cred.
@sarahwexler32
Previous Dodgers @ Giants April 27, 2017: Happy Julio Urias Day
Next The Moral Questions of Kenta Maeda’s Contract