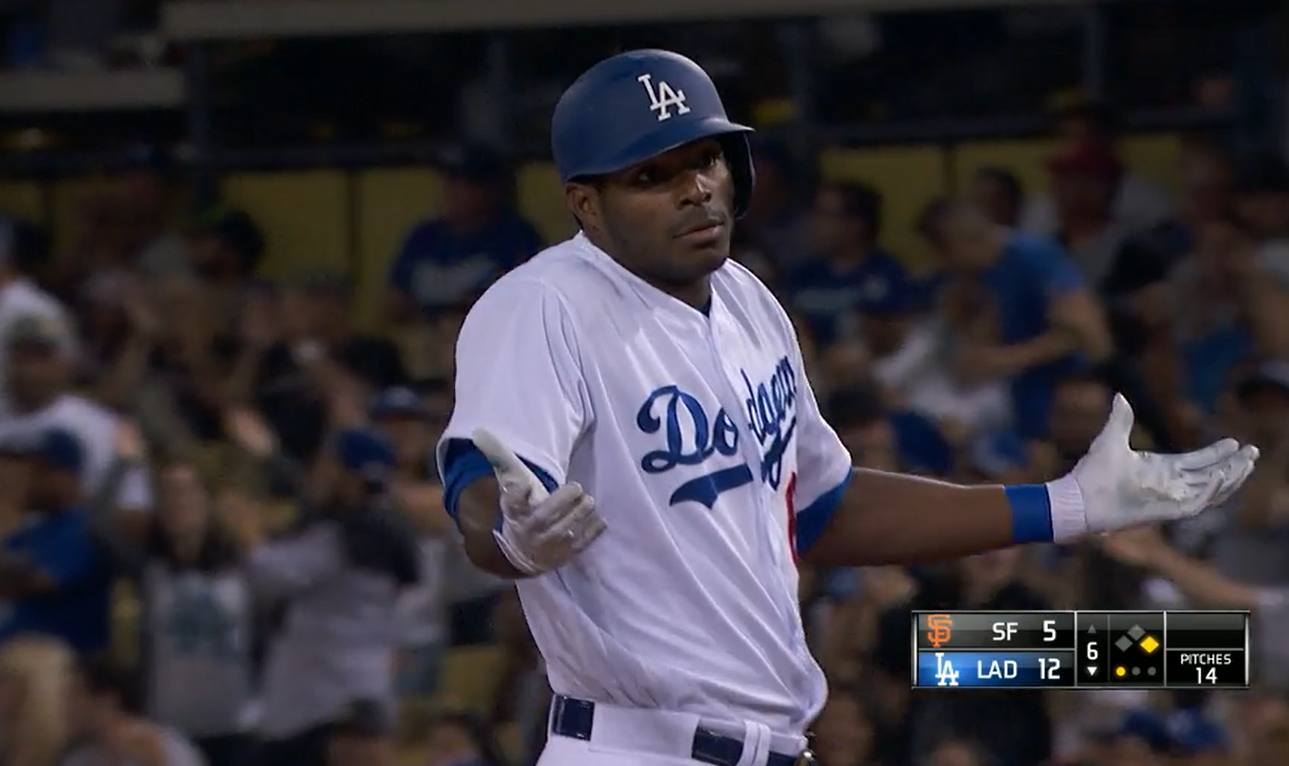 Clayton Kershaw losses are always a bit depressing because you just don’t expect it to happen. But it did happen yesterday, so thankfully the Dodgers bounced back in a big way against the Giants in a 13-5 win.

Rarely is the offense the story in a Dodgers/Giants matchup, especially from the Dodgers side of things when squaring off against a lefty (and Matt Moore, in particular). However, that was definitely the case today, as the offense exploded for 11 hits (two doubles, a triple, and a homer), a whopping nine walks, and a hit-by-pitch.

After Moore notched a six-pitch first inning, Franklin Gutierrez greeted him in the second with a solo shot.

That was followed by a Chris Taylor walk, a Yasiel Puig infield single, and an Austin Barnes walk to load the bases. Cody Bellinger then cleared them with an excellent piece of hitting to go the other way for a triple to left.

Alex Wood followed with a jam-shot single of his own to drive in Bellinger.

After Moore actually recorded an out, Corey Seager doubled to put runners on second and third for Justin Turner, who hit a sacrifice fly to drive in the sixth run of the inning.

The Dodgers were far from done in the game, however, as Cody led-off the fourth with a single. After Wood struck out trying to bunt, Enrique Hernandez walked and then so did Corey to load the bases yet again. That knocked Moore out of the game, and new pitcher Cory Gearrin immediately hit JT in the butt for a run. Guti followed by lining a shot the other way, but Buster Posey managed to knock it down and get an out at second, just not before another run crossed the plate. After Taylor drew a walk to load the bases again, Puig came up huge with a two-run, two-out single.

That made it four runs in the inning and 10 for the game.

The Dodgers added to that in the sixth after a Turner single and Andrew Toles double set the stage. While Taylor actually made in out for once, Puig didn’t as he drove in two more with a single.

But the inning continued from there, as Barnes walked to push Puig into scoring position, and after Bellinger just missed a fat pitch and flew out, Adrian Gonzalez singled into right to drive in the 13th run for the Dodgers.

So yeah, one could say the offense had itself a day.

On the other side of things, Wood allowed five runs (four earned) in five innings, but as Brim put it:

Wood gave up four runs in the second on four hits and a walk, but two of the hits never left the infield and the third was a bloop single into center. Just a brutal sequence, really. It didn’t end there, though, as in the third Wood kicked a double-play ball leading to just one out being recorded. That allowed a runner to move into scoring position, and it was cashed in later with a two-out, twenty-bouncer for a run.

Wood’s command could’ve been better, for sure, but in the end he only issued one walk and struck out eight, with over half the seven hits he allowed coming on soft contact.

The bullpen took over from there where a miracle happened, as Sergio Romo and Chris Hatcher got a combined three of the final four frames and the Dodgers didn’t allow another run. Luis Avilan also was used for a scoreless frame of his own.

13-5 type of games are nice when the Dodgers are on the happy side of it for once.

Shout out to Bob Nightengale.

Yo, I'm gonna need Bob to predict Cody will be the biggest bust of all time. pic.twitter.com/eRNJUO745n

"A highly rational Internet troll." - Los Angeles Times
@ChadMoriyama
Previous Giants @ Dodgers May 2, 2017: Wood vs. Moore
Next Cody Bellinger’s hot start making it hard for Dodgers to send him back to OKC