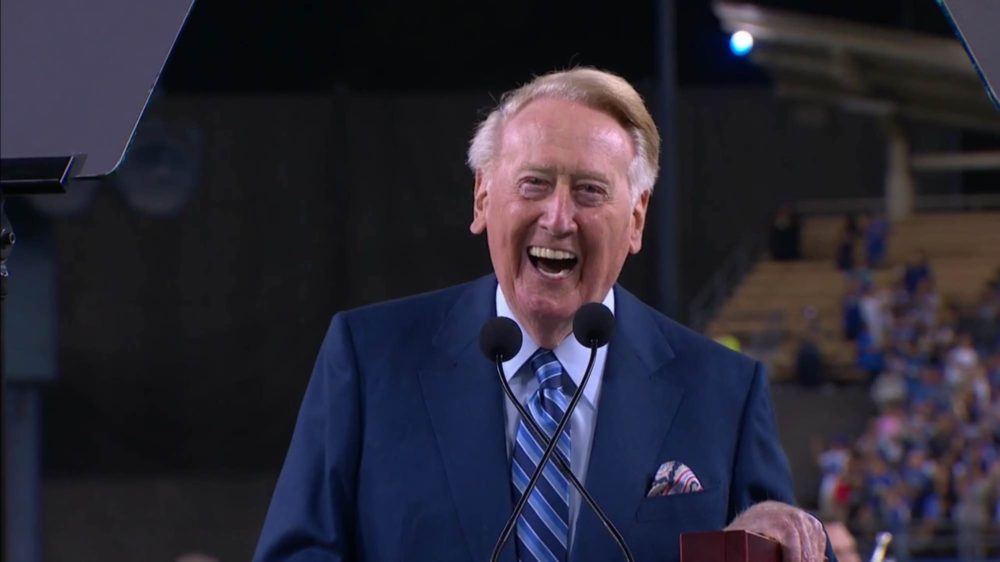 Sure, the Dodgers and Giants are playing a rubber game tonight. But let’s be real here: the most exciting thing happening at Chavez Ravine this evening isn’t the game, but rather the Vin Scully Ring of Honor ceremony.

Vin got his fair share of accolades last year, but there’s something extra special about this one. Prior to tonight’s game, the Dodgers are revealing a plaque dedicated in his honor, placed alongside the team’s 10 retired numbers:

I'll give you one guess where Vin Scully's plaque will go on the Dodgers ring of honor pic.twitter.com/Kc7jvjhobb

Vin is the first non-player and non-manager to receive this distinction.

We all miss Vin a ton, of course, and it’ll be wonderful seeing him in front of the crowd at Blue Heaven on Earth once more. He treated the media to a 15-minute press conference earlier today, and the entire thing is available to stream through the Dodgers’ Facebook page. The big takeaways are that retirement is treating him well, and this will likely be his last time in the spotlight at Dodger Stadium (he may come to games, but he’ll do so inconspicuously).

With all that said, there is actually a game happening, so we should probably talk about that a bit. Julio Urías (1.59 ERA, 3.71 FIP, 1.412 WHIP) will be making his second start of the season. His first start also came against the Giants, and it was a strong effort: just one run allowed in 5.2 innings pitched, with four hits, four walks and four strikeouts. If you want some pre-game reading, Scott Miller profiled Urías in a piece run earlier today at Bleacher Report.

After some deliberation yesterday, Adrián González is back in the starting lineup tonight, in spite of, uh, this:

Adrian Gonzalez is dealing w/ herniated disk. He aggravated it two weeks ago. He says it's less severe than 2016, when he got an epidural.

That is … decidedly not good. Nevertheless, González is in there, batting sixth, behind Cody Bellinger (this would be Bellinger’s sixth different batting order position in nine games).

It looks like Joc Pederson plans to be back on Friday, but don’t expect to see Logan Forsythe quite that soon:

Pederson told Roberts he will return Friday. Forsythe might be a little behind that timetable.

Forsythe also had some hamstring tightness to complicate his return.

It’s hard to imagine that Pederson returning can mean anything other than Bellinger being sent back to Triple-A — unless, of course, González is actually placed on the disabled list. Dustin wrote about this earlier today.

Finally, yet another quasi-update on Scott Kazmir:

Will we be seeing him any time soon, though?

Sarah Wexler is a native Angeleno and longtime Dodger fan. She began blogging about baseball in 2012 on her Tumblr, New Grass On The Field, where she covered an array of topics but especially enjoyed exploring baseball history. She is now a reporter/producer for MLB.com. She earned her master's degree in Sports Management from Cal State Long Beach. She graduated from New York University in 2014 with a bachelor's in History and a minor in American Studies. She's an avid Springsteen fan, which is a big boost to her baseball writer cred.
@sarahwexler32
Previous Cody Bellinger’s hot start making it hard for Dodgers to send him back to OKC
Next Giants 4, Dodgers 1: Floodgates open late, Dodgers drown