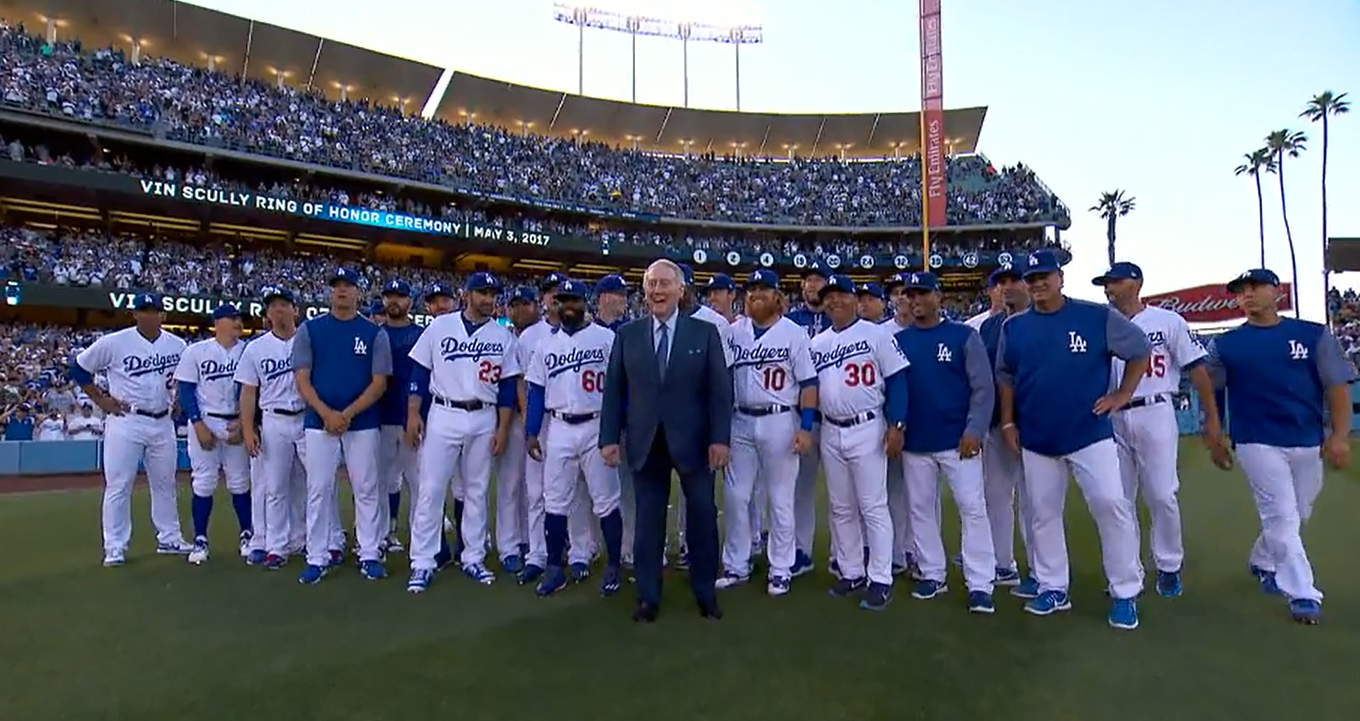 Vin Scully was back in Dodger Stadium today, and after his ceremony for the Ring Of Honor induction was over, the Dodgers apparently thought it was time to go home as well. They tempted fate all game long, and for a while it looked like they might score an undeserved win, but they finally faltered late in a 4-1 loss to the Giants.

Julio Urias didn’t exactly have his best command today, but amazingly (and luckily) he kept a scoreless outing through five innings. Urias labored through 88 pitches, frequently getting behind hitters, but was fortunate enough on balls in play to only allow four hits. That was necessary since he struck out only one batter and walked four, barely escaping trouble in the third and fifth innings. Urias will need to be better going forward, and if his pacing in the dugout was any indication, he was well aware.

Pedro Baez entered in relief and after retiring the first two batters, got into trouble of his own by allowing a ground-ball double, but he too escaped damage after issuing an intentional walk and then getting the next batter to keep things scoreless.

On the other side of things, Jeff Samardzija came into today with an ERA of about five trillion and a batting average against versus lefties of about .950. So of course he faces a lineup of seven lefties and a team that scored 13 runs yesterday, and he made it through five shutout innings without breaking a sweat.

In the sixth, it looked like he got off to another quick start by getting Yasiel Puig to pop-up behind first base, but Joe Panik had it hit off the heel of his glove and of course the Wild Horse went for three.

Chris Taylor then managed to cash it in with a single.

And that was it offensively.

Ross Stripling came in to preserve the lead and he set the Giants down 1-2-3 in the seventh. Stripling was also left in for the eighth and unfortunately got screwed by some bad luck. To start, Hunter Pence hit a ball past Adrian Gonzalez at first, which looked odd because he was there in plenty of time but he simply didn’t get the glove down for … some reason. After the “single”, Stripling bounced a 50-foot curve that would’ve been difficult to block for anybody, but Yasmani Grandal compounded that by not being able to find the ball and Pence not only took second but third.

That boner proved costly as Buster Posey ended up driving him in with a grounder right to second, which would’ve cut off the run at the plate, but the Dodgers choose to play the infield back in the eighth inning of a one-run game for some reason. I get wanting to prevent a big inning, but at that point you have to take your chances to actually try and get a win. Stripling got out of it after that, but the damage was generally done.

Kenley Jansen entered to get the ninth and struck out the side, but he did so against the bottom of the order. Great usage of him. Josh Fields then came in for the tenth … to face the top of the order. After getting the lead-off man, he went walk, single, and single to load the bases with one out. After the Dodgers escaped, Buster was … unhappy with the decision to not attempt to score.

Grant Dayton‘s inning finally proved to be too much, as he surrendered two walks and three hits as he labored through 23 pitches, surrendering three runs.

Still, at some point the Dodgers had to do something offensively and that simply didn’t come. They scored on an error, but were otherwise limited to six singles and a hit-by-pitch, with three of those runners erased on caught stealings or double plays.

Puig’s reactions are a joy to behold.

When you get bored so you decide to get shot. pic.twitter.com/Z79wqauL5K

With the loss, the Dodgers fall back to a generally average 15-14 overall and are 10-6 at home. Granted, they’ve played better recently, but this was a series they had to get.