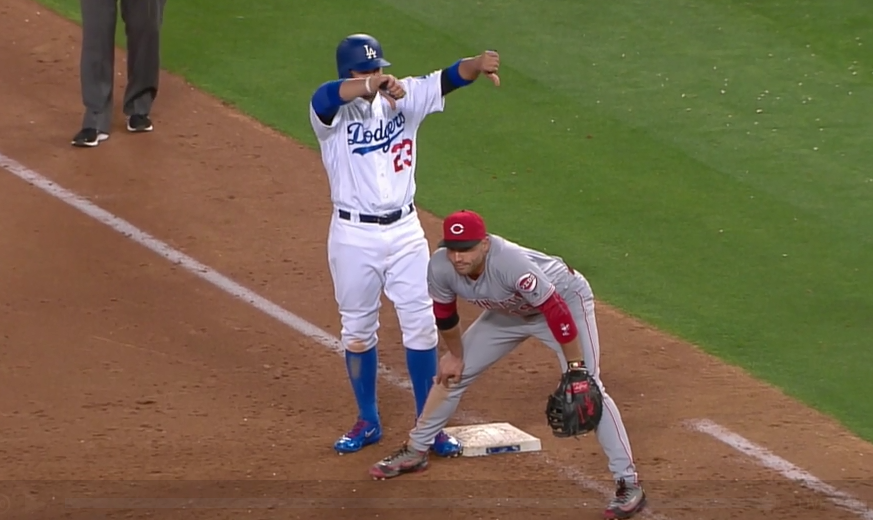 That much has become obvious to anybody watching the Dodgers play this year as he grits through plate appearances and tries to get something out of his body. It’s a testament to his quality that his strikeout rate and walk rate remain at career rates even as his ISO would represent a career-worst effort by about a 100 points. Of course, at this point A-Gon’s still hurting the team on offense by putting up a 77 wRC+ as a first baseman (.255/.327/.309/.636), and perhaps on defense as well on nights like last night when a single curiously got past him cause he didn’t get the glove down in time.

A-Gon’s issues started in Spring Training with inflammation in his right elbow, which in retrospect he admits should’ve led to a DL stint.

Adrian Gonzalez reached across his body and pointed toward his right forearm. The entire mess started there. And perhaps, with the benefit of hindsight, it should have ended there. “I should have gone on the DL to start the season from this,” Gonzalez said.

Ever the warrior, A-Gon instead tried to alter his mechanics to deal with it, but ended up straining his left triceps instead.

He altered his mechanics to compensate for the soreness in his forearm, which caused strain in his left triceps.

Then came perhaps the most serious blow, when he aggravated a herniated disc in his back … on an off-day picking up his daughter.

Gonzalez aggravated a previously herniated disk during a day off April 20, when he felt his back give while bending to pick up his daughter. The consequences of the benign incident could ripple outward as the Dodgers debate whether to shut down Gonzalez for at least 10 days.

That injury, unsurprisingly, has messed with his swing.

His chief complaint is tightness. His back struggles to loosen up, which has compromised his swing. “I’ve just got broken parts, man,” he said with a grin.

Adrian Gonzalez has never been on the DL in his career. He steadfastly avoided going on it last year even when he was banged up with a similar issue, instead taking games off — after which he was considerably better, I should note. It’s a matter of pride, and he understandably takes pride in being healthy and available.

Still, with the roster crunch coming up and Cody Bellinger looking like the third-best hitter in a lineup of veterans, the best thing A-Gon could do to help the Dodgers is take time away and get right. To his credit, while he does think he’s getting healthier, A-Gon is not against the DL if the team advises it.

“I would consider it, 100%,” Gonzalez said. “I’m never against it. It’s not like they’re telling me ‘We want to put you on the DL,’ and I’m like ‘No, no, no.’ That’s not the case. I’ve played through injuries my whole life. It’s not something new to me. I’ve always just played through whatever I’ve got, and found a way to deal with it.”

Yeah, it’s time for everybody to get on the same page regarding his injury.

Despite my complaining on social media over his performance this year, I definitely appreciate and respect A-Gon for his off-the-field work, his performance over the years, and his key role in this Dodgers rebuild. He’s provided a sense of stability to a franchise seemingly in constant flux of late, and if the team needed a key hit with a man in scoring position, there’s still nobody I trusted more.

I understand defaulting to him.

At this point, however, the Dodgers and A-Gon have to put that aside and make the decision that’s best for both the team and the player at the moment, because it’s quite clear by now this is the common sense move. Let’s hope the people who matter agree.