When you’re OPSing 1.205 and your slugging percentage is 179 points higher than Justin Turner, perhaps it’s time you get a dedicated article. Many argued that Chris Taylor should have broke with the team when Spring Training concluded. After all he was nothing short of impressive, hitting .354/.483/.500/.983 with three doubles and two triples in 48 at-bats. Dave Roberts snubbed Taylor and gave the nod to Enrique Hernandez instead, citing his success against left-handed pitching and ability to play center field, as well as other positions, as the reasons why the decision went in Kiké’s favor.

Taylor was called up on April 19 when Logan Forsythe and Rob Segedin both landed on the disabled list, and he never looked back. Since joining the big club, he has contributed to the team with surprisingly above-average offense as well as solid defense around the infield. Those stirrups are A+ as well.

Forsythe’s unexpected length of time on the disabled list opened the door for Taylor, who has received increased playing at second base with the scuffling Utley spending more time on the bench.

“I think Chris has earned that,” manager Dave Roberts said.

The Dodgers acquired Taylor from the Mariners last season in exchange for former first-round draft pick Zach Lee, and so far they have #wonthetrade. Lee has only pitched in three games (eight innings) with San Diego this season after being waived by the Mariners, but he’s allowed five runs on eight hits with six strikeouts and eight walks. Curiously, Lee did pitch 5 1/3 scoreless innings in Coors Field in a spot start for the Padres, his first MLB game since that fateful day on July 25, 2015 when he made his MLB debut with the Dodgers at Citi Field and got shelled for seven runs on 11 hits in 4 2/3 innings. Lee was not as effective in his two relief appearances against Atlanta and Arizona after his unicorn of a start in Denver.

There’s no arguing that Taylor has been anything but great since becoming a Dodger. While Cody Bellinger has received much of the attention since making his MLB debut with the Dodgers last month (and rightfully so), Taylor has quietly put together a strong case to stay on the big club along with him.

So what changed? Dodgers’ hitting consultants worked with Taylor on his swing, and the changes have paid off immensely.

At the urging of Dodgers hitting consultants Robert Van Scoyoc and Craig Wallenbrock, Taylor exaggerated the height of his leg kick, roughly from the height of his shoe to the height of his sock. (Taylor typically wears his socks just below his kneecaps.) He’s also loading his hands earlier, giving him more momentum toward the baseball than he had from a still position in the past. Through Monday, Taylor had improved his average exit velocity from 87.5 mph to 96.0 according to MLB’s Statcast data. The 8.5-mph jump was the most of any returning Dodger. 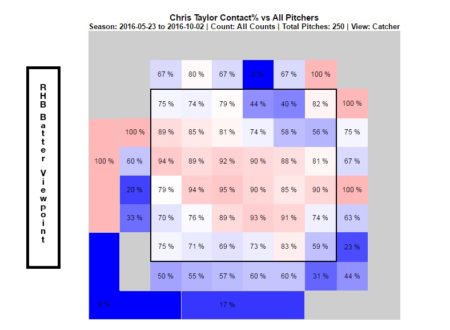 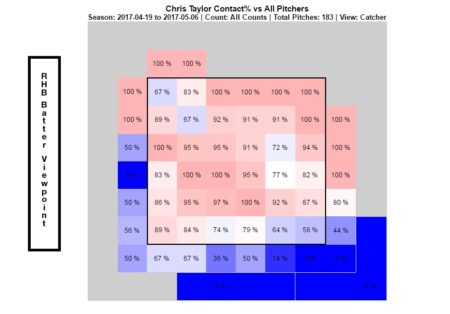 I don’t know how to put this, but Chris Taylor is the best hitter I’ve ever seen

Taylor’s future is dependent on Forsythe’s eventual return, a recovery process that has taken longer than expected. Forsythe left his rehab game with hamstring tightness on May 4, extending Taylor’s stay for now. It will be interesting to see what Roberts decides to do considering that Chase Utley has been abysmal so far this season and currently has a -8 OPS+ in 24 games, and Kiké Hernandez has been looking more like his 2015 self of late. It’s hard to imagine demoting someone who is hitting .395/.521/.684 with three home runs in 16 games and is playing like a crystal blue-eyed Babe Ruth. Even if Taylor is optioned when Forsythe returns, his contributions have nevertheless paid off well so far considering he only cost the Dodgers an organizational depth type of player. Taylor will no doubt be a valuable asset and go-to guy this season, even if it’s off the bench or his time is split between OKC and LA.

Stacie Wheeler, born and raised in So Cal, has been writing about the Dodgers since 2010. She wrote daily as the co-editor of Lasorda's Lair for five long years, and she has also written for Dodgers Nation, Dodger Blue 1958 and The Hardball Times. She currently contributes to True Blue LA. Stacie graduated from the University Of Southern California with a bachelor's degree in Cinema-Television. You can also watch her videos on her YouTube channel, DishingUpTheDodgers.
@StacieMWheeler
Previous Dodgers 12, Pirates 1: I, for one, welcome our new Chris Taylor overlord
Next Pirates @ Dodgers May 9, 2017: Urías vs. Nova