Dodgers 4, Pirates 3: A game almost lost in the lights saved by Bellinger & Barnes 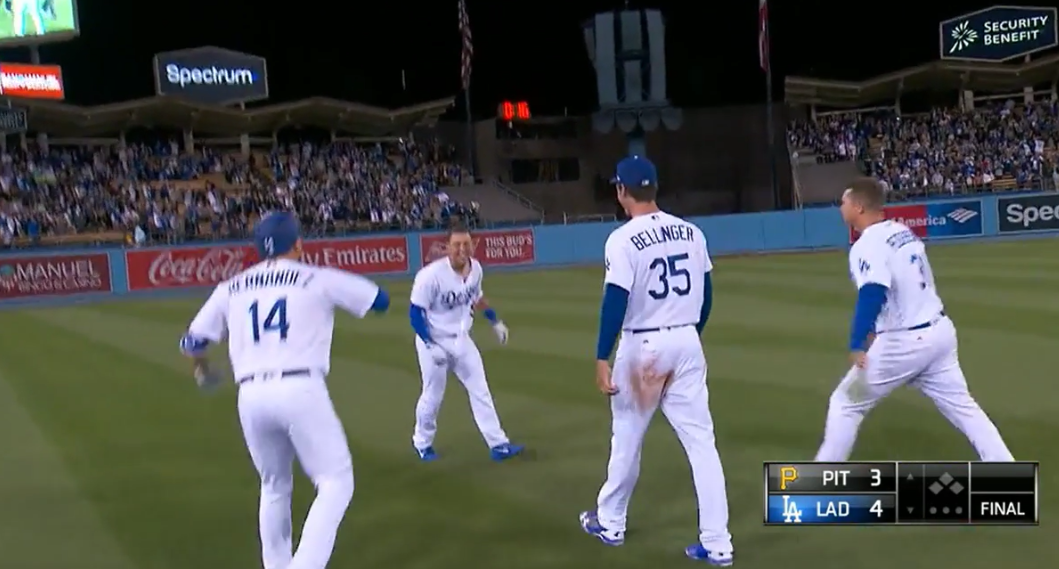 Talk about a roller coaster of emotions in the 4-3 win for the Dodgers today over the Pirates. A game that looked in complete control for the Dodgers was coughed up under frustrating circumstances, rallies fell short, and then a bit of luck broke and a surprising victory was won in the end.

Julio Urias is still fighting his command a bit, which makes it all the more amazing how effective he is regardless. Urias went six no-hit innings before surrendering a double to the first batter in the seventh, and he was removed after getting an out from the next batter. He threw 95 pitches on the night, walking two and striking out five.

Unfortunately, it didn’t matter much, as Sergio Romo entered. While he got the first man, he then hung a slider that was hit on a line to left field. However, it seemed like Enrique Hernandez would have a relatively routine play on the ball, and he did … at least until he lost it in the lights. 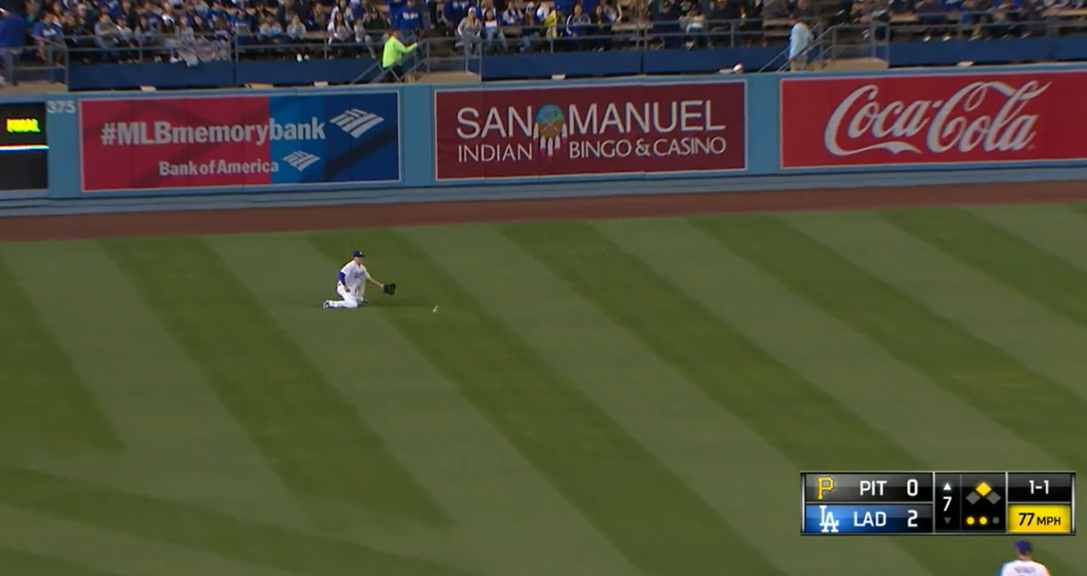 Five outs to Kenley Jansen and choosing Romo is bad so this was probably deserved, but my god. After that Romo was removed for Luis Avilan, who promptly basically threw a change in the dirt and allowed a bloop single to left. Just like that the game was tied.

The Dodgers, of course, were ahead to begin with after Yasmani Grandal broke a deadlock in the fourth with a two-run homer.

But other than that, it was a story of some missed chances for the Dodgers offense. In the fifth, back-to-back singles to start the inning seemed to set the table perfectly for the middle of the order. However, Corey Seager, Justin Turner, and Cody Bellinger went down in order without much fuss. Most notably, in a tie game in the seventh, Chase Utley led off with a double. That led to a questionable Enrique sac bunt that gave away an out and didn’t seem to do much.

Utley’s not slow, so he was definitely already in scoring position, and you have to like your chances of getting something off a tiring Ivan Nova versus Felipe Rivero in relief. Regardless, the Dodgers failed to come through, as after Seager was hit in the shoulder, JT grounded back to the pitcher and Cody was caught looking at strike three.

After all that, of course Pedro Baez comes in for the eighth and immediately served up a solo shot to right. Baez has allowed two runs this year, both of which have been high-leverage dongs, because that’s just what he does.

The Dodgers came back and threatened again in the eighth. With two down, one out of which was a ball Grandal hit about three feet short of a homer, Chris Taylor doubled to left. Yasiel Puig then struck out, but the ball got away and he reached first while Taylor got to third. After a stolen base, a hit would’ve put the Dodgers in the lead, but Franklin Gutierrez struck out to end the threat.

Josh Fields got a 1-2-3 ninth for the Dodgers, which proved important after the Dodgers rallied with their backs against the wall. After a strikeout started things, Seager singled to right and then JT singled as well with a fly ball off the end of his bat that was misread. That brought up Bellinger, because of course, and of course he singled to right to tie the game with a seeing-eyed roller.

Jansen got the top of the tenth in 1-2-3 fashion to the surprise of nobody and his FIP is now seriously -0.95. In the Dodgers half, Grandal started with a single, which brought up Taylor. So let the hottest hitter go, right? Wrong, they tried to have him bunt, he failed twice, and then struck out after being buried in that hole.

Why are they bunting with Babe Ruth at the plate?

After Puig struck out for two down, Austin Barnes took the first pitch he saw and did this.

While he almost killed Ross Stripling in the process, it was all part of the plan, man.

In downer news, something might be seriously wrong with Andrew Toles, who went down awkwardly on the double that broke up the no-hitter.

Roberts said ACL injury is possible for Toles because of the way he landed. Need MRI results to see

Hoping for the best, but I thought it didn’t look good.

With the win, the Dodgers improve to 19-14 overall and 12-6 at home. Most importantly, they made sure I could say cool things like “they’ve now won 9 of their last 11”.

The Dodgers go for the series sweep tomorrow night at 4:10 PM HST/7:10 PM PST/10:10 PM EST. The mound matchup will be a seemingly revitalized Kenta Maeda against Chad Kuhl, who doesn’t seem too good but who knows with this lineup sometimes.