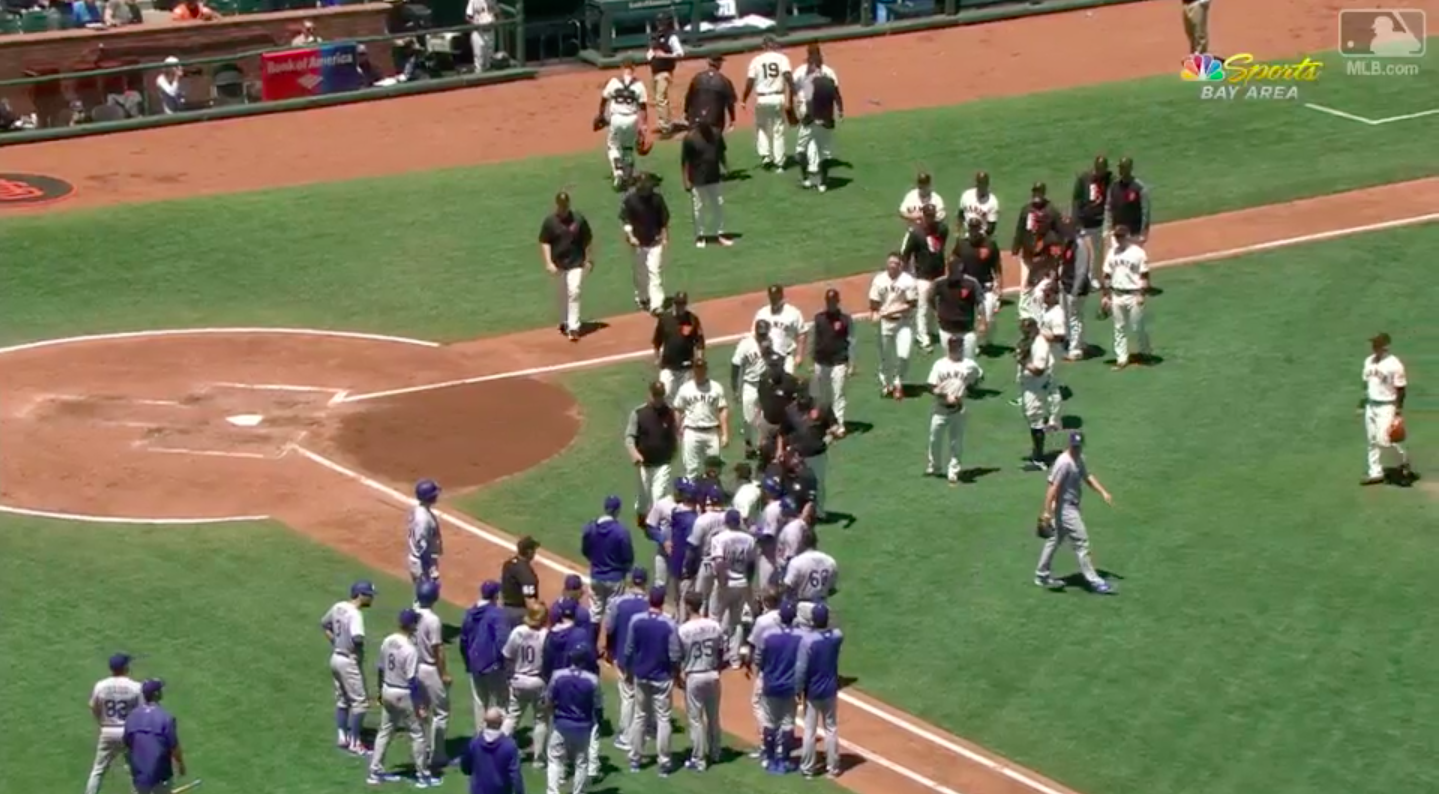 After two miserable games in San Francisco, the Dodgers managed to salvage the series finale against the Giants, thanks largely to an outstanding effort by Clayton Kershaw.

The Dodgers got the scoring against Johnny Cueto started early. Corey Seager and Justin Turner each reached in their first inning at bats (single and double, respectively), and both came in to score on a double by Yasmani Grandal:

Double off the wall on a line, somehow. pic.twitter.com/Z7IHUjHA3l

As often seems to happen when the Dodgers and Giants play each other, there was some friction between Grandal and Johnny Cueto, which Chad was so kind as to splice together for us:

Kershaw was rather uninterested in the whole ordeal:

Man who does not care about the benches clearing: pic.twitter.com/42N6zEg55l

Clayton’s such a stickler for his routine, he doesn’t have time for things like brawls getting in the way of that.

Speaking of Kershaw, this was easily the best he’s looked all season. He delivered seven scoreless inning and allowed just three hits (one a 65 MPH liner up the middle, one a 67 MPH liner just over Seager’s head, and a Buster Posey blooper to center).

Most encouragingly, it seems Kershaw may have finally figured out his slider. Rather than throwing it in the low 90s as he has been for much of the season, today he was throwing it around 86-89 MPH, and getting the results he wanted, with four of his five strikeouts coming via that pitch.

At only 89 pitches, Kershaw likely could have kept going, but the Dodgers were courteous enough to provide enough runs that it seemed safe to let him come out after seven.

With two outs and the bases loaded in the top of the sixth, Yasiel Puig singled in two runs to pad the lead:

They’d add another run off of Josh Osich in the seventh inning. Osich walked Seager, and Cody Bellinger brought him home with a double, his second of the day.

Pedro Báez pitched a scoreless eighth inning, and then Sergio Romo allowed a home run to Eduardo Núñez in the ninth inning, ending the Dodgers’ hopes of a shutout. Still, he managed to seal the victory, and send the Dodgers home on a happy flight.

Sarah Wexler is a native Angeleno and longtime Dodger fan. She began blogging about baseball in 2012 on her Tumblr, New Grass On The Field, where she covered an array of topics but especially enjoyed exploring baseball history. She is now a reporter/producer for MLB.com. She earned her master's degree in Sports Management from Cal State Long Beach. She graduated from New York University in 2014 with a bachelor's in History and a minor in American Studies. She's an avid Springsteen fan, which is a big boost to her baseball writer cred.
@sarahwexler32
Previous Dodgers @ Giants May 17, 2017: Kershaw v. Cueto, Vol. 2
Next Marlins @ Dodgers May 18, 2017: Ryu vs. Volquez and some old friends