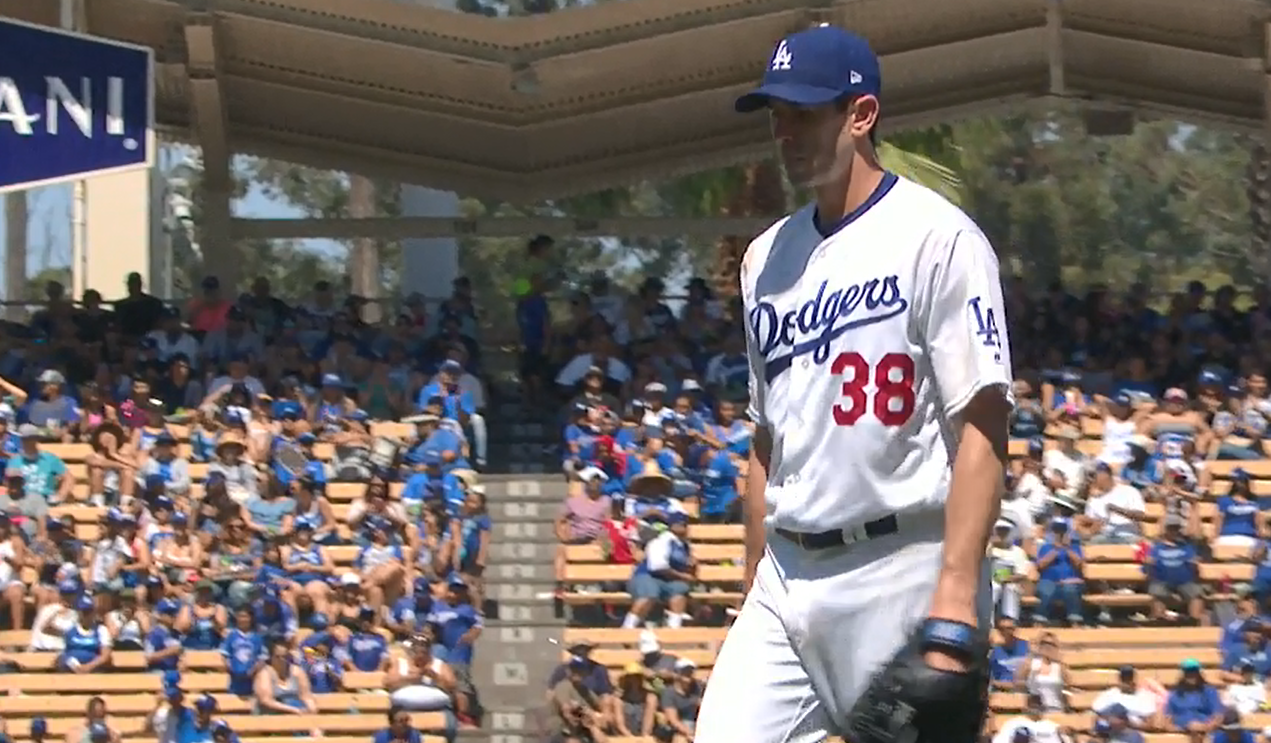 With the Dodgers having a rough slate of games ahead of them, it seemed rather imperative that they came away from today with a win, and they did just that with a 6-3 victory over the Marlins behind Brandon McCarthy‘s arm and Adrian Gonzalez‘s revitalized bat.

After giving up just 6 runs in his first 4 starts of the year, Brando gave up 10 runs in his last 2 starts before taking the mound today. Facing a Marlins team that just exploded yesterday, McCarthy turned the Dodgers fortunes around as well as his own, pitching 6 innings of 1-run ball, allowing just 3 hits and 1 walk while striking out 5. Truthfully, he probably deserved better than even that line with the sharpness he displayed today.

Probably helped that he had Chase Utley backing him with plays like this:

Also, shout out to Chase for finding a way to be useful despite obviously deteriorated skills. In his first 13 games and 30 plate appearances, he posted a .136 OPS. It’s almost impressive to be that terrible. In his last 21 games and 62 plate appearances entering today, Utley has posted a .294/.393/.431/.825 line, and even chalking up the power surge as temporary would still make him highly playable. Utley was 1-for-4 at the plate today.

Thankfully the offense didn’t make it a tight game, backing McCarthy with runs. After back-to-back hits with two outs put runners on 2nd and 3rd, A-Gon showed signs of life in the first with a 2-run double to put the Dodgers up early.

In the fourth, a struggling Joc Pederson got himself back on the board with a towering homer to right.

The next inning, again with two out, A-Gon followed a Grandal double with a single to left to drive in another run.

The Dodgers got started quickly in the sixth for a change, as Joc lead-off with a hit-by-pitch, then Enrique Hernandez doubled, and Brett Eibner drilled a pinch-hit 2-run single down the line in left.

Eibner, of course, was pinch-hitting for McCarthy, meaning his day was done after 75 pitches. Thankfully, even after they were tasked with getting 6.2 innings yesterday, the pen seemed relatively fresh today as well.

Luis Avilan entered to start the seventh getting his two batters before Josh Fields relieved him and completed a clean 1-2-3 inning with an out. Pedro Baez was then tasked with the eighth, and his frame was a lot more eventful. Baez gave up a run on two hits and a walk, thankfully getting Giancarlo Stanton to pop-up to third to end the threat.

With a day off tomorrow, Kenley Jansen took to the hill even with a 4-run lead and he promptly made it a 3-run lead by giving up a solo shot to Justin Bour. After a jam single to right, Jansen got a pop-up and then a double play to end any potential rally.

Not even a strikeout though, there goes the negative FIP!

Speaking of Utley, he is a crazy person.

This was a slightly bad call against Cody Bellinger.

This was called strike three. pic.twitter.com/CogQjEYGT0

Stanton, who is always cool, broke the fence by jumping into it.

Giancarlo Stanton broke the fence just by leaping into it. pic.twitter.com/t9cpZoNWaZ

The victory moves the Dodgers to 26-19 overall and 16-7 at home. That’s actually good for 6th-best in all of baseball, but also only 2nd-best in the NL West.