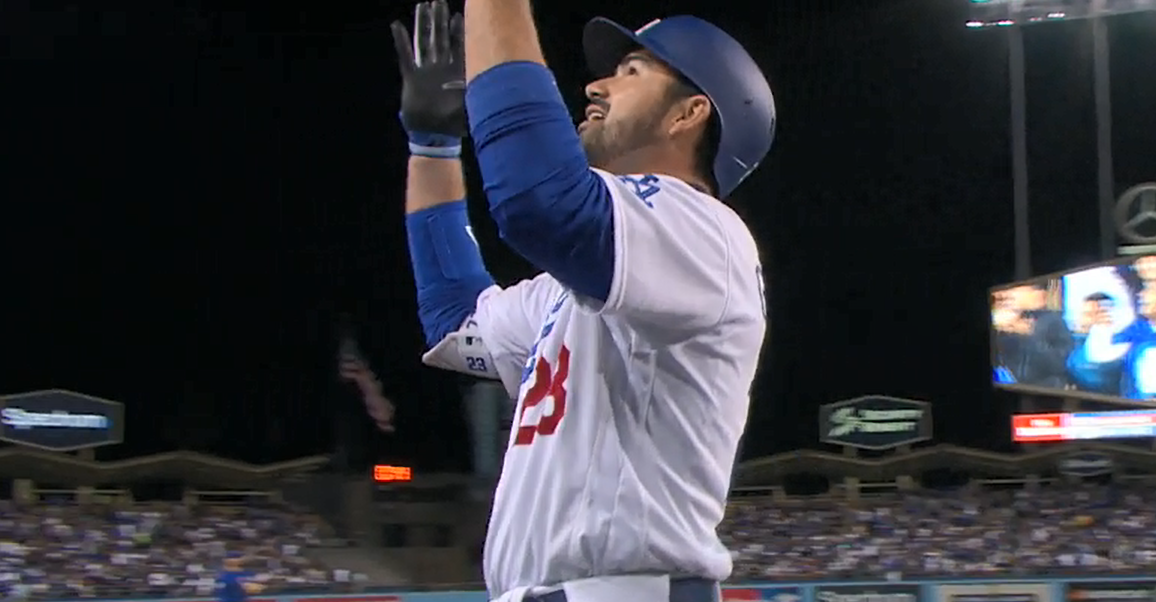 Basically everything that could’ve gone right did go right for the Dodgers tonight in a 4-0 win over the Cubs. Excellent pitching and timely hitting were the name of the game, and even without Justin Turner, the Dodgers are finding out a way to get wins against the tough section of their schedule.

Alex Wood was largely sharp from the get-go with command and effectiveness of all his pitches, but the Cubs lineup is a slog to get through and they made him throw 91 pitches in just 5 innings. Thankfully those innings were all quality, as he shutout the Cubs and allowed only 2 hits and 2 walks while striking out 8.

Better yet, both hits came on singles put on the ground, and at least one if not two of the walks should’ve been a strikeout instead.

Wood’s ERA drops to 1.69, which would lead the league if he qualified. That discussion managed to get Joe Davis to mention Dodgers Digest and some idiot on broadcast.

I then got owned online.

Jake Arrieta didn’t seem like the pitcher who was getting shelled early in the season, and he generally looked pretty good. The Dodgers only got 5 hits and 3 walks on the night, but thankfully they made the ones they did get count.

The offense got on the board in the 3rd thanks to a solo shot from Chase Utley.

1) Back-to-back games with a homer for Baseball Dad.

2) That guy’s food got destroyed.

The next inning, the Dodgers got on the board immediately behind a walk from Corey Seager and a Yasmani Grandal double hammered into the left-center gap.

After taking an inning off from scoring, the Dodgers got back to it in the 6th behind a one-out single from Seager and then a two-out bomb to center from … Adrian Gonzalez?

Yes, A-Gon with his first dong of the year, and it seemed like it might’ve honestly never come. Hopefully how he’s looked recently is a sign of health and a sign of improvement to come.

Speaking of improvement, the pen was tasked to get 4 innings tonight, and they got 4 scoreless frames from just 2 pitchers. Pedro Baez got 2 frames for himself, surrendering just 1 walk while striking out 2. Tempting fate, Chris Hatcher was tasked with the 8th and got a 1-2-3 inning somehow, then he came back out for the 9th and got another 1-2-3 inning to end it.

The win moves the Dodgers to a good 29-20 overall and an excellent 19-8 at home. They will probably win 97 games and finish third in the NL West, however. Unfortunate.

The Cubs will be back at Dodger Stadium tomorrow as the Dodgers go for a series win at 1:15 PM HST/4:15 PM PST/7:15 PM EST. The Dodgers will send Brandon McCarthy (3.76 ERA/3.15 FIP/3.37 DRA) to the mound with him looking to continue one heck of a bounce-back season so far. The Cubs will counter with famous mouth-breather John Lackey (4.82 ERA/5.01 FIP/5.27 DRA), who is having a poor season so far mainly due to home-run problems.